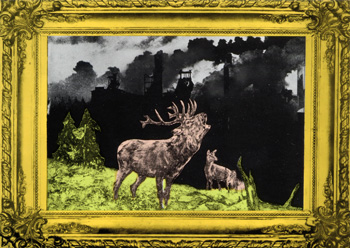 German artist Klaus Staeck’s provocative photomontages have been sounding the alarm about environmental degradation for decades in pieces such as “It bellows out loud.”

A trained lawyer, Staeck is a self-taught outraged artist — politically outraged, socially conscious and frustrated. He’s called attention to issues such as poverty, freedom of speech and peace, but his bête noire has been man’s assault on the environment, from global warming to nuclear waste to water pollution.

Through the mass circulation of his indelible photomontages in posters and postcards, Staeck has been something of a warrior on a barricade many of whose members have long deserted their posts.

You can tell that he’s still frustrated and angry by the title of an exhibition of his work at the Goethe-Institut: “Nothing is Done.” You can take it any way you want, but the unmistakable gist is that nothing has been done to address issues Staeck began sounding the alarm about in the 1970s — issues, like climate change, that have only grown in importance.

In German, the title — “Nichts ist erledigt” — comes out even heftier. It seems to describe the slowness of mankind’s ability to change in a hyper-changing environment that’s being systematically destroyed.

When one views these 40 original posters on display — which wind, bend, splatter and explode upstairs at Goethe-Institut — the German language should be kept in mind. That’s because the translation doesn’t always convey the same force Staeck originally communicated with his evocative slogans.

In these slogans, there’s a certain kind of German sensibility at work on a desperately human subject. Staeck is first and foremost a self-described political artist, going back to the late 1960s when he took up local politics in the city of Heidelberg with motifs that still echo today right here in the United States. In one poster that could have appeared in last year’s presidential campaign, he proclaims, “The Rich must become richer yet, therefore vote CDU” or “German workers, the SPD seeks to take away your villas in Tessin from you” — referring to the center-right Christian Democratic Union and the center-left Social Democratic Party (SPD).

He started doing posters on the environment 40 years ago, when the biggest issues where polluted waterways, big cars, oil spills and the extinction of animal species. All remain relevant today, as do his warnings about the verifiable signs of global warming, as seen in the melting of polar ice caps and the increasingly violent weather around the world, from typhoons and tornadoes to floods and wildfires. 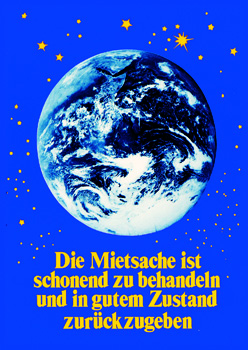 Over the years, Staeck has become, if anything, more outspoken, less ironic and more direct, although he’s also found time for his daytime duties as president of the Akademie der Künste, an arts academy in Berlin.

In the United States, Staeck would be considered a hardcore environmentalist. There’s nothing shy or subtle about his warnings. The frustration shows in the implacable attitude of his work.

In a recent interviews, Staeck acknowledges that people are more aware of various social problems, but the answers to the problems are simply not being embraced because markets drive politics.

Part of the solution, at least to Staeck, is to create haunting images.

And that’s exactly what his images are, as they jump across borders and touch on the universally felt repercussions of consumer-driven and industrial societies. Political art is not the kind that’s defined by grace, technique or style. Staeck’s photomontages are defined by attitude, outrage, a savage wit, and an in-your-face approach that tends to annihilate the opposing side’s argument.

There is little gray area in his depictions of carbon monoxide, mounds of garbage, oil-drenched birds, looming smokestacks and the daunting truths of everyday life that chip away at our clean air and the fragile, increasingly crowded ecosystems we share with animals who are on the losing end of that co-habitation.

The straightforward visuals and messages are always accompanied by a keen, focused intellect. For example, one poster riffs on the Bible with a picture of bounty that includes sardines, packaged noodles, vegetables and bread, with the line: “Give us our daily poison.” Or a blue-tinted earth as seen from space, looking oddly fresh and sanguine, with the note that “the item rented is to be handled with care and returned in good condition.”

A container of nuclear waste comes with the attached Hallmark-like slogan: “Something to make our grandchildren remember us 10,000 years from now.” And there’s “The Oil Prince,” a dramatic and timeless rendering of a bird all but drowned in oil from the latest spill, be it caused by Exxon, BP or the like.

Staeck’s rage is palatable in these posters that make no bones about our sins over the last 40 years ago, transgressions that continue today. His posters, he noted, like the issues they address, “just don’t age.”

Nor has time softened Staeck’s response. “My anger is still there,” he once said. It’s right there, in fact, screaming from the walls of the Goethe-Institut, where Staeck has at least done something.

Vorsicht Kunst – Nothing is Done