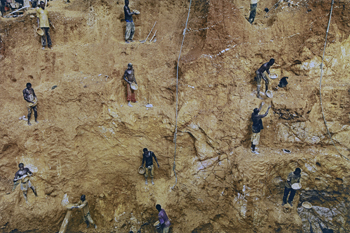 Among the works in “Earth Matters”: George Osodi’s “De Money series no. 1”

In a spacious, high-ceilinged gallery two levels below ground in the beautifully designed National Museum of African Art, a grand multimedia exhibit of paintings, ceramics, sculptures, photography and film takes on no less than the entire planet itself — and man’s relationship to it.

“Earth Matters: Land as Material and Metaphor in the Arts of Africa” showcases the primacy of land as an element of African life — a fitting examination given that the continent is the cradle of humanity. In fact, “Earth Matters” is the first major exhibition to explore the ways in which African artists and communities navigate their relationship with the land on which they live, work and draw their inspiration.

Another first is “Earth Works,” the first installation of land art by three artists to be assembled outside in the Smithsonian Gardens and on the National Mall.

Inside the museum, there is a lot of terrain to uncover in the 100 works from 24 countries by more than 40 artists that span the 19th to 21st centuries. They are arranged thematically around five categories: Material Earth, Power of the Earth, Imagining the Underground, Strategies of the Surface, and Art as Environmental Action.

Many of the pieces offer sobering reflections of the land on which we subsist, but like the written word, these artworks also provoke contemplation.

Perhaps the most universally resonant works deal with the environment. Moroccan artist Younès Rahmoun collected the ubiquitous plastic bag from street litter. He squeezed, wrung and compressed the bags into tiny balls the size of garlic heads until they could be tied in a knot. Then he strung the balls like beads and hung them on the wall. “Kemmoussa” consists of three horizontal strings of dozens of balls that encourages us to ponder what we can do to reduce trash.

“Mine,” a five-minute black-and-white animated film, depicts mining with a scathing eye. Renowned South African artist William Kentridge portrays a fat industrialist propped up against pillows, cigar in one hand and cash register in the other, poised to plunge a French press coffee pot. When he does, the press travels down, in Kentridge-style frenetic movement, through the glass coffee pot, through his bed, house, the ground and deep into the earth where hundreds of miners sleep in four layered sardine-like compartments and work in a mine shaft shaped like the iconic image of a slave ship. The commentary is caustic.

A painfully striking photograph bathed in gold shines a light on Kentridge’s seemingly fantastical tale. Nigerian artist George Osodi shot “De Money series no. 1” to depict the dangers of mercury exposure, environmental damage and deplorable working conditions that miners on the continent face. We see these bare-chested, barefoot young men scaling and working a golden-slathered rock wall — like tiny specks clinging to a precipice, in this case eking out an existence in dangerous conditions.

“We are Destroying Planet Earth” is another blunt commentary that resembles a sheet of newsprint covered with child-like scrawls. A closer look reveals people with bewildered expressions running wildly, butterflies tumbling in space and tiny colored birds in haphazard flight across a chaotic landscape. Artists Ghada Amer of Egypt and Reza Farkhondeh of Iran seem to be imploring us to recognize the damage we’ve done.

A figurative pot from the Ouatchi peoples of Togo

Nigerian photographer Charles Okereke, touring the show one April morning, stopped in front of his picture, “Once a blue world,” to talk to an observer. “How do I tell the world about the impending catastrophe?” he asked rhetorically as a way of explaining his work, in which he took an up-close shot of a bottle cap reflecting sunlight while wading in a canal of putrid water.

Earlier pieces pay more abstract homage to what lies below ground and to the linkages between the living and their ancestors.

A 19th-century female half-figure by a Gabonese Punu artist is an “extraordinary work of art,” said Karen E. Milbourne, the exhibit curator. Less than a foot tall, this pretty, serene woman with braids around her head stands in repose holding plant fibers. Her lower body is wrapped in a bundle of hide and laced with rope, while little packets of red laterite, soil rich in iron and aluminum, are under her arms. This reliquary ensemble was highly venerated and may have been used to communicate with the earth.

A rust-red conical terracotta vessel by an Ouatchi artist in Togo in the early 1900s carried offerings to the world below and received sacrificial gifts for the people above. Smooth-surfaced on the upper half and darkly textured below, you can see the point at which it was buried in the ground.

A graceful arching ivory tusk etched by a Nigerian Edo artist in 1850 depicts mudfish, a common motif in African art dating back centuries. Mudfish, which live deep below water in the mud but can crawl onto land, are believed to represent royalty.

Earth as a physical substance is used symbolically in “Rain Horse” by South African artist Diane Victor, who burned atlases about South African land policy during apartheid and used the charcoal ashes to draw a horse sprinting over a barren landscape.

Meanwhile, Nigerian artist Otobong Nkanga created a table that doubles as a map of Africa, depicting its countries in bright colors. Long rods pierce the countries as a metaphor for politicians grabbing power and corporations plundering the land for minerals. “What happens to a person when their place on the map disappears?” asks Nkanga in “Limits of Mapping.”

Another natural component of “Earth Matters” is three site-specific outdoor installations of land art on the Smithsonian Enid A. Haupt Gardens. Ghanaian sculptor El Anatsui’s piece “Ala” is a monumental pyramid-shaped structure composed of mirrors and rusted metal graters once used to harvest crops — a towering expression of the earth’s ability to both sustain and mesmerize us.

Our planet gives life, nourishes the soul and takes us back after death. Artists in Africa, which gave birth to mankind, have long used the earth’s riches to express identity, connect to ancestors and pose questions about modern-day life.

As Strijdom van der Merwe, a South African artist in the exhibit, put it: “The earth embodies history, culture, life. When you touch it, hold it and work with it you are united with your very own existence.”

Earth Matters: Land as Material and Metaphor in the Arts of Africa