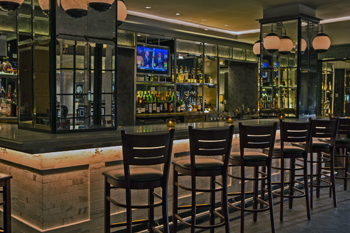 In the past few months, new and revamped bars and restaurants inside the city’s top hotels have complemented D.C.’s ever-expanding dining and social scene.

“Hotel bars create energy and the social environment,” said Ed Baten, a 20-year-veteran of the hospitality industry. He’s general manager of the W Washington D.C. hotel, a luxury chain known for being at the forefront of chic lodgings all over the world. The 2009 arrival of the W and its P.O.V. rooftop lounge, which commands striking views of the White House, cemented the red-hot reputation of the city’s hospitality market.

A D.C. native, Baten said the area wasn’t exactly known for nightlife years ago. But now, with a strong economy and a population spike, largely driven by young professionals in their 20s and 30s, the nation’s capital is no longer just a sleepy center of government — it’s a national trendsetter.

Hotels are following suit, tapping into the city’s growth with innovative drink and dining offerings. The hotel bars of yesteryear — staid, clubby watering holes for weary travelers — have become posh yet approachable destinations in their own right. And hotel restaurants are now expected to bring in world-renowned chefs to carve out a name for themselves in this competitive field.

Today, the city is home to a mix of classic establishments — from the Willard InterContinental’s Round Robin Bar to the Jefferson Hotel’s Plume Restaurant — and contemporary hotspots such as Bourbon Steak in the Four Seasons and the Park Hyatt’s Blue Duck Tavern.

But whether traditional or modern, hotels know they have to keep their food and beverage programs fresh to satisfy the discerning tastes of their clientele.

Here are some of the latest culinary and cocktail newcomers housed inside the city’s hotels:

The new Edgar Bar & Kitchen in the Mayflower Renaissance hotel is named after J. Edgar Hoover, the first director of the FBI and a lunchtime regular at the Mayflower for 20 years.

At the historic Mayflower Renaissance, power dining gets a facelift with this American-style brasserie. Edgar Bar & Kitchen opened last December, offering craft cocktails and inventive plates to guests of the 88-year-old hotel long known for being a hub among diplomats, out-of-town politicians, businessmen and Beltway elite.

J. Edgar Hoover, the first director of the FBI, was one of the regulars at the Mayflower for 20 years. The upscale restaurant is aptly named after the hotel’s most famous power luncher.

“This place returns to the original footprint of what the restaurant used to be, back in the day when J. Edgar Hoover used to dine here,” said Jason Richter, the restaurant’s food and beverage director.

For two years, Richter oversaw the redevelopment of the food and drink program at the Mayflower, with an eye on keeping up with the latest trends in the service industry. That involved the creation of the 166-seat Edgar following the demise of the Mayflower’s iconic Town and Country Lounge, a popular local watering hole that opened in 1948.

“The idea was to return that grand bar to Connecticut Avenue which fits the image of the Mayflower. Not only does it appeal to customers, but it also appeals to our local following here in downtown,” he said.

In recreating that grand bar, the Mayflower consolidated its sparse, disparate dining areas on the first floor — Café Promenade, Town and Country and the wine bar in the lobby.

Gone is the dark, old school ambiance of Town and Country in favor of an open, sleek eatery that serves as a contrast to the historic property in which it’s housed.

“As the travelers change, they’re not looking for a white tablecloth restaurant every night. They want something very casual and approachable — a place where they can network,” said Richter.

The hotel also recognized the need to balance privacy with the perception of importance while being inside Edgar. So they added booths along the windows to increase the exposure of the restaurant, which is attached to the Mayflower but also has a separate street-side entrance.

“You can have a very political private conversation in the context of the fun and energy around you,” said Keith McClinsey, general manager of the Mayflower. 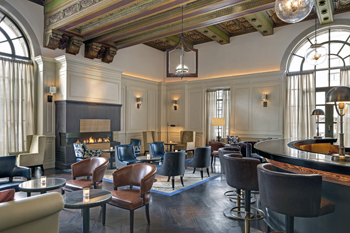 The bar at the St. Regis boasts a swanky new interior by award-winning architecture and design firm Rockwell Group.

St. Regis, another historical hotel built in 1926, has also been going under the knife in parts of its main floor. First, it renovated the bar and lobby for two months to open just in time for the wave of out-of-towners coming for this year’s Presidential Inauguration.

A few months later, St. Regis and its partner celebrity chef Alain Ducasse announced the closing of Adour, the award-winning restaurant that had been with the hotel since its renovation back in 2008. Replacing this minimalist, wine-focused power spot is Decanter, a Mediterranean-inspired venue that’s set to open this summer.

As the hotel puts the finishing touches on Decanter, guests can check out the redesigned bar just outside the restaurant. Kerem Kendigelen, the hotel’s food and beverage director, considers the bar one of the St. Regis’s most important attractions.

“We are located right on 16th and K,” he said. “K Street has some of the most powerful attorneys and D.C.’s strongest people. We definitely want to bring that wonderful clientele together at our bar for happy hour and have that cultural exchange.”

When hotel management contemplated a makeover of the bar last year, Kendigelen said one target audience was young professionals whose sophisticated taste in drinks would draw them to the St. Regis.

The bar now boasts a swanky new interior by award-winning architecture and design firm Rockwell Group, which put a modern twist on the traditional English club. The result is a clean, airy space punctuated by a leather and Swarovski crystal chandelier specifically designed for the bar, wooden herringbone floors, Chesterfield sofas with distressed leather, and other elements that echo the historical grandeur of the hotel. Among the features that were kept intact were the bar and lobby’s original 16-foot carved ceilings and arched windows.

The 1920s “pre-Prohibition” era-inspired cocktail menu, an ode to the days when the hotel first opened its doors, puts a heavy emphasis on bourbon and whiskey, with concoctions such as the Old Fashioned and Classic Red Snapper.

“Our clientele is more into the whiskeys and bourbon, single malts — more into hard liquor,” Kendigelen explained. “Even with our younger guests, we said, ‘Why don’t we lean more toward that?'”

The Bloody Mary, for which the St. Regis is widely known, is still on the menu, but there’s also a new twist called the Capitol Mary, made with gin instead of the classic vodka. Green Hat Gin, produced by the city’s first distillery to open following Prohibition, is the bar’s choice of poison for this signature drink.

“We want to put something out there that nobody knows about,” said Kendigelen. “It’s delicious. It’s different, sustainable and local. That’s what people are going to be attracted to.”

Another addition to the bar is the food menu created by the hotel’s executive chef, Sébastien Rondier, who helmed Adour’s kitchen and will play a prominent role in developing St. Regis’s new restaurant.

“Rondier made Adour very successful,” said Kendigelen. “Our chef is spreading his wings. Decanter is all about chef Rondier.” 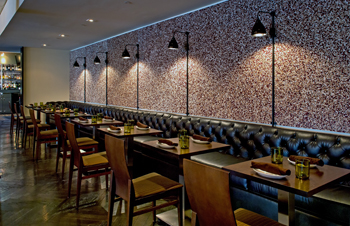 Art Smith’s Art and Soul features a wall adorned with a mosaic of beans to reflect the restaurant’s Southern hospitality theme and the chef’s farm-to-table approach.

Adour’s Alain Ducasse is not the only celebrity chef to part ways with Washington. Last year saw the departure of Eric Ripert from Westend Bistro at the Ritz-Carlton on 22nd Street as well as chef Susur Lee from Zentan at the Donovan House on 14th Street.

Turnover is nothing new in the restaurant industry, even in the world of haute cuisine, but as a few celebrity chefs headed for the exits, another was plotting to make his restaurant even better a few blocks away from the Capitol.

Art Smith, Oprah Winfrey’s former personal chef, reopened his restaurant Art and Soul in March after a complete renovation and rebranding. The sleek new space by the Seattle-based Hospitality Design firm plays up the Southern hospitality theme and the chef’s farm-to-table philosophy by creating “a contemporary urban market feel.” Carpeting has been replaced by herringbone wood flooring and playful rustic touches include walls adorned with a mosaic of beans, mason jars for drinking glasses, old doorknobs for the draft beer, hand-painted farm signs and local vintage furniture from Miss Pixie’s.

“The renovation exposes more of the art and soul of the restaurant,” said Patrick Chiappetta, the former general manager of Art and Soul who now oversees Smith’s company operations in New York.

Art and Soul, which, like Adour, was first unveiled in 2008, also started offering three options of ready-to-go picnic lunches that include house-made charcuterie prepared by the restaurant’s executive chef, Wes Morton. And now, every Wednesday evening, it hosts a “pig and oyster roast” on the patio that costs $35 per person. 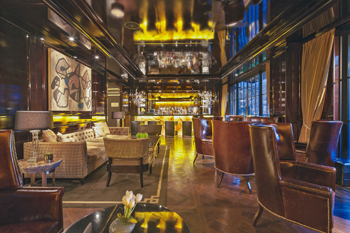 The Rye Bar in the new Capella hotel overlooks the historic C&O Canal in Georgetown.

When the international Capella Hotel Group decided to open its first U.S. location by planting roots in the venerable D.C. neighborhood of Georgetown (see main Hotels and Travel story), the luxury boutique chain also wanted to bring a new food and beverage concept to the nation’s capital.

That resulted in the Rye Bar and the Grill Room. The two venues, with floor-to-ceiling windows that overlook the historic C&O Canal in Georgetown, opened this spring (there’s also a rooftop bar and lounge, a rarity in the city).

Aptly named after the whiskey it specializes, the Rye Bar aims to attract a sophisticated following with its plush leather seating and collection of rare spirits. The audience is “anyone that has an appreciation for detailed service and a good cocktail,” said the hotel’s food and beverage manager, Will Rentschler.

Currently, the barrel-aged Manhattan, made with Dad’s Hat Rye and aged for six weeks, is in demand. It sold out in eight days after the bar’s opening, even with the hefty price: $22. Created by Rentschler, the new and bountiful 15-gallon batch will be available later in June.

The Rye Bar also offers a selection of rare rye whiskeys that include a 13-year Van Winkle Family Reserve and a 10-year Abraham Bowman, as well as a harvested ice program with hand-shaved ice cubes.

Adjacent to the bar, the Grill Room showcases the refined cuisine of Swedish executive chef Jakob Esko, whose background includes the Capella in Singapore and several Michelin star restaurants all over the world, including Sihlhalde in Zurich.

Some of the restaurant’s highlights include tableside preparations of American Wagyu Beef tartar and a champagne cart that has 10 labels by the glass, including champagne from the private collection of the exclusive Taittinger French winemaking family.