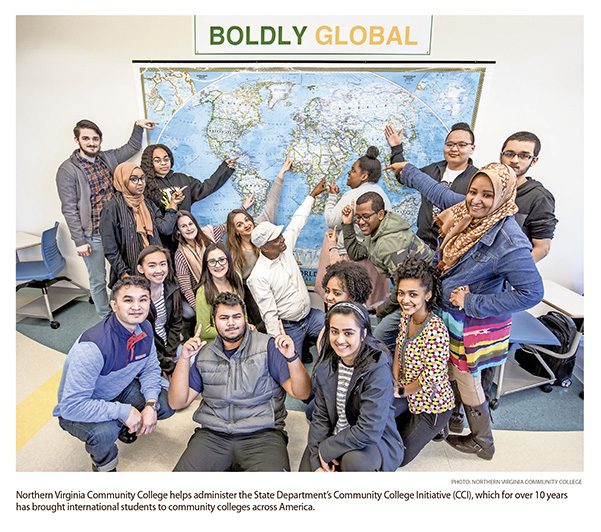 A renewed focus on America’s community colleges has emerged in education and policy circles over the last several years, especially as the cost of university tuitions continues to soar.

Starting with Democratic policymakers touting the prospects of free community college tuition, and continuing with the Trump administration’s emphasis on apprenticeship and the role of community colleges in vocational training, a tier of the U.S. higher education system that has stood in the shadow of “traditional” four-year colleges now finds itself in the spotlight.

A State Department program called the Community College Initiative (CCI) celebrated its 10th anniversary in 2017 and in many ways anticipated the current focus on the value and growing importance of community colleges. But it has added an international twist to a local phenomenon. Instead of encouraging more Americans to attend community college, CCI’s goal is to bring foreign students to experience the vast network of community colleges throughout the U.S.

Since CCI’s inception in 2007, the State Department’s Bureau of Educational and Cultural Affairs reports that over 2,800 students from 21 countries have enrolled at over 75 U.S. community colleges as part of the program. The students have studied such diverse subjects as agriculture, applied engineering, business management and administration, information technology, and tourism and hospitality management. 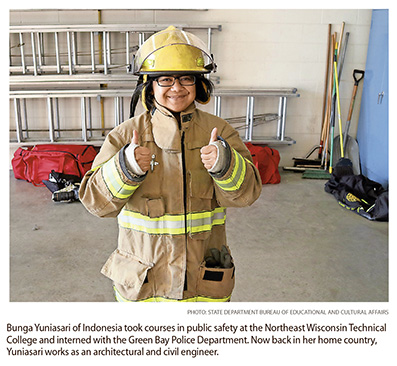 Given that community colleges now serve nearly half of all Americans pursuing a higher education, CCI offers international students a prime opportunity to interact with their U.S. peers, helping students learn from each other and build the networks and skills they need to succeed in a globalized world.

Moreover, CCI emphasizes real-world work experience in addition to academics. On top of a year of coursework, during which students obtain professional certificates where possible, CCI participants pursue hands-on internships with local businesses and organizations.

For example, during the 2016-17 school year, Bunga Yuniasari of Indonesia took courses in public safety at the Northeast Wisconsin Technical College and interned with the Green Bay Police Department. Now back in her home country, Yuniasari works as an architectural and civil engineer with PT Bhimasena Power Indonesia, where she touts the “valuable workplace skills from her CCI experience,” such as factoring evacuation route requirements into the design of building entrances.

Likewise, Muhammad Ferdaus of Bangladesh studied public safety in Boston, where he contributed over 600 hours volunteering for groups such as the American Red Cross. Now back in Bangladesh, he is pursuing a postgraduate degree in disaster management and also trains women and girls working in the garment and textile industries about environmental safety, worker rights and emergency management systems. Ferdaus’s community service led him to be selected as one of 1,000 Sustainable Development Goals (SDG) Talents for the global nonprofit initiative UNLEASH and as one of 200 Global Young Leaders Fellows with the organization Women Deliver.

Volunteering is a key component of CCI. Participants engage in “service learning,” which connects students to local civic organizations and community service activities to improve their leadership skills. “Through different service events, I learned that volunteering is not an act of charity, but it is an act of community,” Egyptian Amira Ahmed Mahmoud, who studied at Santa Rosa Junior College in California, said in a recent State Department report on CCI’s first 10 years. “The number of hours you spend volunteering is time you give to the future. 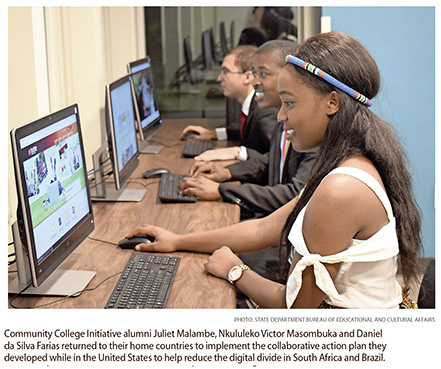 In addition, CCI teaches students practical skills such as English proficiency, resume writing and tips for working in a U.S. business environment. The goal is similar to what educators hope community colleges offer Americans: a pathway to better job prospects. Over 80 percent of CCI participants reported being employed about one year after completing the program, according to the State Department report, while 93 percent of CCI alumni said they “used the knowledge and experience gained in the program to introduce new ways of doing things at work.”

As part of this emphasis on the real-world application of academics, the program encourages students to develop an action plan they can implement back home. For example, “Juliet Malambe, Nkululeko Victor Masombuka and Daniel da Silva Farias returned to their home countries to implement the collaborative action plan they developed while in the United States to help reduce the digital divide in South Africa and Brazil,” the State Department’s CCI report said, noting that the three received a donation of 40 computers to help them provide hands-on computer training. “Their efforts also inspired the Global Education and Services department at their host college, Fox Valley Technical College, to consider a study abroad program for U.S. students to travel to South Africa and provide upkeep, teaching and other services for the computer labs,” the report said.

Another advantage of U.S. community colleges is their diversity. Because these colleges are often home to minorities, CCI participants are exposed to a range of Americans from different backgrounds.

While CCI embraces cultural exchange, its emphasis on practical experience mirrors the increasing recognition among U.S. policymakers that the traditional university system is leaving too many Americans behind and needs to be complemented by apprenticeships and vocational education to help young jobseekers. 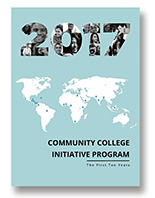 The skyrocketing costs of American higher education over the past several decades have priced out many students or left graduates who are already struggling to find jobs saddled with crippling student debt. According to the College Board, the average annual cost of tuition and room and board at a four-year, in-state public college rose over 3 percent to just above $20,000, while a private institution today will run students nearly $47,000 a year. Meanwhile, according to the U.S. Federal Reserve, outstanding student debt in the United States climbed to $1.5 trillion in the first quarter of 2018, compared to $600 billion just a decade ago.

These staggering loan burdens have prompted state and local governments to begin offering reduced or free tuition at community colleges.

The trend was already underway when, in his 2015 State of the Union address, President Obama said that Republican-governed Tennessee and Democratic-controlled Chicago showed that free community college was possible. In the speech, Obama said that he wanted “to spread that idea all across America, so that two years of college becomes as free and universal in America as high school is today.”

Sen. Bernie Sanders of Vermont elevated the issue further after winning the 2016 Democratic primary in New Hampshire, saying in his acceptance speech that in order to have the best-educated workforce in the world, “we are going to make public colleges and universities tuition-free.” 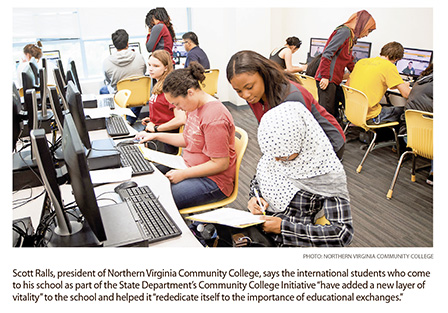 The idea has gained steam quickly, but it was far less prominent when CCI began in 2007. According to the State Department’s CCI report, then-Undersecretary of State for Public Diplomacy and Public Affairs Karen Hughes said the goal of the program was “to provide educational and exchange opportunities to a broader and more diverse segment of young people overseas, including women, minorities and those from financially disadvantaged backgrounds.” That in turn would allow students “to have a voice and serve as leaders in their societies,” which is “essential for future peace, security and prosperity of our world.”

CCI was created at a time when America needed to foster goodwill internationally. The U.S. under the Bush administration had spearheaded the invasion of Iraq in 2003, straining relations with key allies and damaging America’s international standing. While the range of countries involved in CCI spans the globe, large concentrations of students have come from countries in the Muslim world, where bulging youth populations face bleak job prospects and where the U.S. has a vested interest in promoting stability.

According to the Bureau of Educational and Cultural Affairs, of the 2,800 students who had participated in CCI as of 2017, the largest number came from Egypt (778), followed by Pakistan (432) and Indonesia (323). But CCI students hail from all over the world, with significant numbers from India (250), Brazil (262) and South Africa (212).

Business management and administration is the program’s most popular subject, with 38 percent of students pursuing it — perhaps not surprising given the broad scope of fields where business skills can be applied. It is closely followed by subjects that are also currently popular among U.S. students pursuing community college and vocational schooling, namely information technology (representing 17 percent of CCI students) and engineering (9 percent).

CCI’s benefits go both ways, with the program seeking “to internationalize and promote U.S. community colleges.”

Foreign students tend to be less susceptible to the perception many Americans have that community colleges represent a lower class of higher education, intended for students who didn’t perform well academically or who come from poor backgrounds. In reality, however, as U.S. employers increasingly prize technical skills in the STEM fields (science, technology, engineering, math), that perception is quickly changing, as many community colleges offer practical training in these areas at a fraction of the cost — and on schedules that are more manageable for working students. 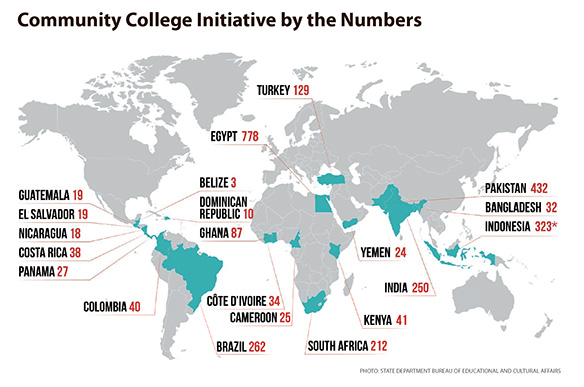 U.S. community colleges that have teamed up with CCI agree that it has served to highlight what they can offer to domestic and international students alike. Scott Ralls, president of Northern Virginia Community College, which administers the program, said participants “have added a new layer of vitality” to the school and helped it “rededicate itself to the importance of educational exchanges.”

These exchanges are especially critical at a time when the United States has found itself under fire for its isolationist policies under President Trump’s America First agenda.

“As CCI students return to their home countries, they become our best representatives and advocates, for they have come to understand who we are as Americans,” Ralls said. 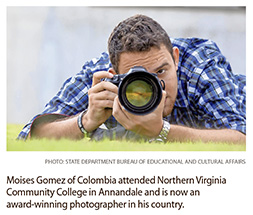 Mick Starcevich, president of Kirkwood Community College in Iowa, says the program has made his school “better able to create a global learning environment in the classroom that meets the reality of the world today.”

Similarly, Northampton Community College President Mark Erickson says that as a result of CCI, “our interest as a college both in bringing the world to us — attracting more international students — but also pushing our students out into the world increased significantly.”

At a time when the State Department has been in the news primarily for its retrenchment, CCI serves as a reminder of the variety of educational programs that the agency administers. Many of those programs are under threat by the administration’s proposed budget cuts and restraints on immigration.