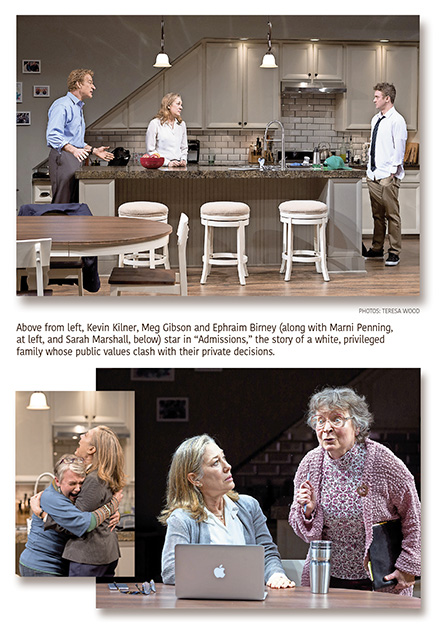 “When you’re accustomed to privilege, equality feels like oppression.” That’s a common adage activists have formulated over the years — and a sentiment that sums up the crux of the provocative play “Admissions” at Studio Theatre.

“This is a play that is less about race than it is about whiteness,” director Mike Donahue told The Diplomat. “It’s not about affirmative action, but about white privilege and white people grappling with their blind spots about it.”

“Admissions” follows the story of a family in a small town in New Hampshire. Bill and Sherri are the white, progressive and proud headmaster and dean of admissions at Hillcrest, a mid-tier boarding school. Together, they have worked tirelessly to diversify the school’s predominantly white population. Currently, 18 percent of their student body is of color, a reflection of their effort “to counter a foundational historical lack of equality in this county,” said Donahue.

The rub comes when their high-achieving son, Charlie, gets turned down for early admission at the Ivy League school, while his friend, who is one-quarter African American, gets accepted.

“Nobody in the play knows whether this friend checked a box that said African American” or whether he was accepted on the basis of affirmative action, Donahue explained.

“Charlie’s reaction blasts open a deep rift between the family’s public values and private actions,” Donahue said. “‘Admissions’ is a no-holds-barred look at privilege, power, the insufficiency of surface-level advocacy and the perils of whiteness.”

However, none of the characters in the play is immoral, Donahue cautions.

“As [playwright] Joshua Harmon captures so richly, even when people have the best intentions, there’s the difficulty of them actually examining and interrogating themselves and seeing their privilege they have as white people. The play grapples with how difficult it is for most people to talk about race; it serves up all the blind spots, the toxicity when people grapple with that.”

“Nobody in the play is a bad person,” echoed actress Sarah Marshall, who plays a provincial woman who works in Hillcrest’s development office. “My character, for example, has lived an isolated life, is naïve and hasn’t been exposed to many things outside her small town. She’s not stupid; she is educated, has a college degree.

“I don’t think my character is racist. I’m a townie in a predominantly white town. One of her lines in the play is that she doesn’t see color,” continued Marshall. “Well, if you don’t often run into people of color, you don’t see color.”

What makes the play even more stimulating is that the characters’ set of circumstances changes who they are, Marshall said.

“It’s about their journey to learn about how their liberal idea of race maybe really needs reexamination,” she said. “Their previous ideas about liberalism get smashed. Their ideas are good in theory until they have to practice them. Their struggles are within themselves. It’s a good dilemma.”

Donahue emphasized that even though “Admissions” deals with a touchy topic, Harmon presents it with grace and humor.

“Josh captured with such nuance, warmth and compassion the relationships between people,” he said. “All the characters are complicated; they have their own hypocrisies and blind spots. But there is incredible humor in the play. Josh is serving up an interrogation of white entitlement but uses humor to help that medicine go down. He uses clever, sharp language that is revealing and uncomfortable. But it’s both an incredibly funny, provocative evening and deeply troubling at the same time.”

Marshall said that Studio Theatre, which doesn’t shy away from confrontational scripts, tries to produce shows that are culturally relevant to the times. “We’re in a tricky moment now in history. This play includes an all-white cast — WASPs — talking about race, [which is applicable]. This show does this well,” she said.

“I hope the play is a call to arms for people to continue to have these conversations…. It’s easy in this country to avoid talking about these issues,” Donahue said. “Being called a racist is the worst thing in the world, so to be respectful, people talk around it. Nothing can ever move forward — there’s no way to explore and understand how things still are. People need to keep talking, make mistakes, continue to educate themselves and listen more.”