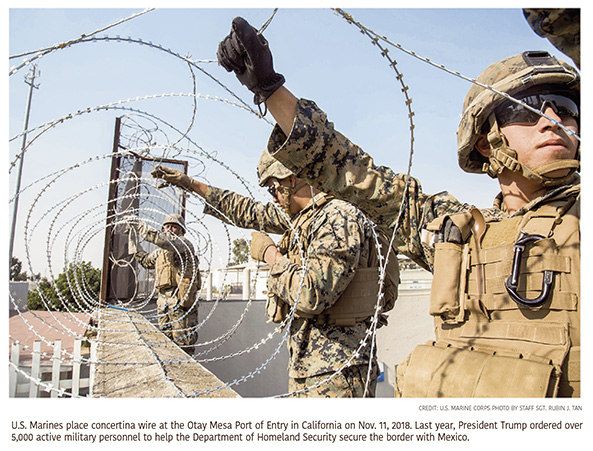 Mexican President Andrés Manuel López Obrador took office Dec. 1 after promising to do in three years what his predecessors couldn’t do in 12: end the horrendous violence and corruption that are pandemic in Mexico.

Yet his plan for doing so is inchoate at best, according to experts.

López Obrador, also known as AMLO, “has created such high hopes for swift results that public trust in state institutions could nose-dive if he fails to deliver. Yet neither he nor his team has fleshed out his proposals,” said an October 2018 report by the International Crisis Group.

“We will carry out a peaceful and orderly, but also deep and radical, transformation,” AMLO said in his inaugural speech to Mexico’s Congress. “We will put an end to the corruption and impunity that are blocking Mexico’s rebirth.”

Rooting out corruption was a centerpiece of AMLO’s campaign. Shortly after his landslide victory, the 65-year-old leftist opened the presidential residence to the public, began driving around in an old Volkswagen and pledged to sell the presidential plane and travel commercially instead.

AMLO says he will fund his programs with the money recouped from his corruption purge. But experts doubt that eradicating corruption, even if it were possible, would generate enough money to pay for such costly social initiatives. There are also concerns that AMLO will govern as a firebrand populist in the mold of Venezuela’s Hugo Chávez.

But AMLO’s supporters point out that as mayor of Mexico City from 2000 to 2005, he was a pragmatic centrist who launched popular welfare programs and improved the local economy.

His overtures to Washington — despite President Trump’s anti-Mexico tirades — have also calmed nerves that U.S.-Mexico relations would deteriorate further under the two nationalist leaders.

Notably, AMLO supported his predecessor’s efforts to renegotiate NAFTA. Now that a revamped deal has been ironed out, he comes into office without having the threat of an imminent trade rift with the U.S. hanging over him.

AMLO also agreed to allow migrants seeking asylum in the U.S. to remain in Mexico while their claims are processed, a major win for Trump and his efforts to curb Central American migration to the U.S. (also see related story on page XX). The Mexican president has floated the idea of a “Marshall Plan” for Central America by devoting $30 billion over the next five years to develop the region. His plan received a boost from the U.S. with the announcement of a $10.6 billion assistance package made up of existing aid money and new loans.

But like his Marshall Plan, AMLO’s promises to tackle the rise of drug-related violence are long on rhetoric and short on details.

“Those are worthy goals, but they are unrealistic, and certainly given the scope of the problems facing Mexico, he’s enormously overselling what he can actually accomplish,” said Vanda Felbab-Brown, a senior fellow at the Brookings Institution in Washington.

AMLO “is inheriting a level of violence that we haven’t seen before in Mexico,” said Tony Payan, director of the Mexico Center at Rice University’s Baker Institute for Public Policy in Houston. “Clearly, the numbers are through the roof.”

Since 2002, when the military was unleashed to fight organized crime in Mexico, more than 200,000 people have been killed and over 37,000 disappeared, mostly at the hands of drug cartels. Mexico is on track to reach a record high number of murders in 2018 — 32,000 — the overwhelming majority of which go unsolved.

“Government officials participate in corruption by benefiting enormously from a standard of living paid for by the government,” Payan said. “They fly jets, live in mansions and palaces and travel luxuriously, paid by government accounts.”

They further enrich themselves by “embezzling money through inflated contract costs and by taking bribes from businesses in exchange for access. We know, for example, that Emilio Lozoya, who was [CEO of state-owned oil company] Pemex, was actively charging hundreds of thousands of dollars to energy companies just to give them a hearing in his office.” 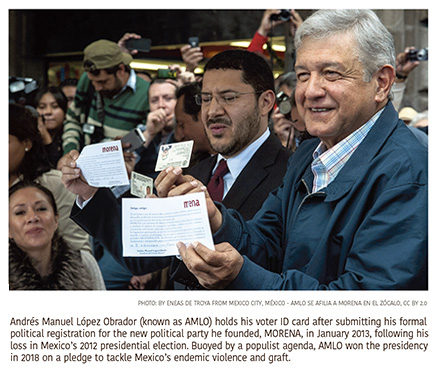 It’s not just senior government officials who enjoy the fruits of corruption.

“Corruption in Mexico is systemic, it’s ingrained,” Payan said. It ranges from senior government officials taking bribes from corporations that break laws and regulations to mainstream Mexican citizens who “pay the cops to let them off from a traffic violation or a building permit violation…. So, the entire society participates in it.”

Known for his frugality, AMLO, the son of an oil worker-turned merchant, became an advocate for the poor early in his career. Decrying the “mafia of power,” he helped oil workers demand better wages from Pemex and railed against the oil giant for polluting indigenous communities.

During his presidential campaign, AMLO promised to aggressively fight corruption, in part by investigating current and former government officials and bureaucrats.

As part of his anti-corruption drive, he’s capped the salaries of public officials. In December, he created a truth commission to re-examine the 2014 disappearance of 43 students allegedly abducted by police and handed over to a local drug gang. And while he’s vowed to promote free trade and foreign investment in the newly liberalized oil sector, AMLO has warned international companies that he would scrutinize all energy contracts.

“There is almost an assumption that now that he is president, corruption will just go away,” Felbab-Brown said. “He wants to create a number of layers to tackle corruption” and to appoint “specially designated officials, but that assumes these officials themselves aren’t already or will not become corrupt.”

It also remains to be seen how far AMLO will go with his anti-corruption campaign.

“This was one of his more important promises,” Payan said. Then, after taking office, he reversed course. In his inaugural speech, he said that “the best approach was forgiveness and forgetfulness and he was not going to go back and dig in the past. That actually drew a boo from the crowd.”

As for the crime wave overwhelming Mexico, AMLO also has sent mixed signals. He initially proposed taking soldiers out of the drug war, eschewing a militaristic approach by emphasizing economic development, peaceful reconciliation, possible amnesty for low-level offenders and the legalization of certain drugs. But legislators from his left-wing Morena Party introduced a bill to create a national guard combining existing military and civilian police under a single command.

AMLO supports the idea and lawmakers recently approved the creation of a new 60,000-member national guard by an overwhelming margin, but there are a lot of unanswered questions.

“Even if he can somehow pull off creating a national guard, what are they going to do? What is it that needs to happen right now?” Felbab-Brown asked. “How will they be deployed? What areas will they focus on? How are they going to make sure that if homicides go down, they won’t come up again?”

What AMLO is doing, she said, is “what every Mexican president has done since the early ’80s, which is trying to deal with crime by creating new institutions by renaming and relabeling old institutions.”

In 2006, the government deployed the Mexican military to battle drug cartels that routinely bribed or intimidated local police and politicians. Despite the military crackdown, drug violence has surged in recent years. While organized crime in Mexico is no longer dominated by a handful of big drug cartels, criminal groups have splintered into smaller, brutal gangs. There are now more than 300 small but ruthless criminal enterprises in Mexico and they have their hands in all manner of crime, including casinos, money laundering, illegal logging, kidnapping and extortion, Payan said.

Under the just-ended presidency of Enrique Peña Nieto, the government expanded the military’s authority, sparking criticism that the move would lead to more human rights abuses.

The Mexican armed forces asked Congress to pass a law spelling out what their law enforcement powers were. Congress complied, but the Supreme Court quickly overturned the law, saying it failed to stipulate what soldiers could and could not do.

AMLO hopes to get around this ruling by deputizing 50,000 soldiers and sailors as police officers without training them as such.

AMLO “inherited a security apparatus that is completely unable to tackle violence and crime in the country,” Payan said. However, he added that “letting 50,000 loose on the streets” of Mexican cities and towns is a formula for more corruption and human rights abuses.

Upon AMLO’s inauguration, White House spokesman Hogan Gidley said in a statement: “President Trump has developed a strong relationship with the incoming López Obrador Administration, and we look forward to working with them on a wide range of issues.”

Somewhat like Trump, AMLO “likes to run things as his own man, very much on an individualistic leader basis, as opposed to institution-building. That is the very opposite of what Mexico needs,” Felbab-Brown said. “His legacy must not be just about him, but must be about institutions.”