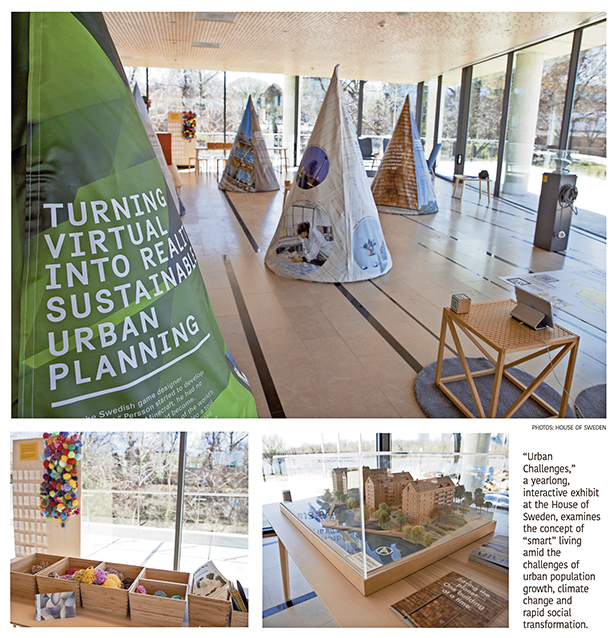 When it comes to designing the city of the future, it’s little surprise to find the Swedes in the lead. The nation that revolutionized modern home furnishing with the sleek lines, blonde appeal and eminent practicality of IKEA has set its sights on the urban landscapes of 2019 and beyond.

“Urban Challenges,” a yearlong, interactive exhibit at the House of Sweden, which incorporates the Embassy of Sweden on the Georgetown Waterfront, proffers suggestions for “smart” living amid the challenges of urban population growth, climate change and rapid social transformation.

The exhibit offers a window onto some of Sweden’s answers to these issues through mixed media, computer graphics and a miniature replica of Sweden’s largest housing complex built entirely of wood. While the use of wood is not surprising, the fact that wood is the world’s only completely renewable construction material is unexpected. The forest-loving Swedes would have us all start using our trees and our urban spaces more wisely, and this exhibit intends to show us how.

Curated by the Swedish Institute in partnership with Swedish business and nongovernmental organizations, “Urban Challenges” reflects the Swedish Embassy’s 2019 public diplomacy theme exploring creative and inclusive “smart” societies. According to the U.N., 2.5 billion people are expected to live in cities by 2050. “Urban Challenges” presents ideas to adapt to this tremendous growth while preserving the environment. As exhibition materials note, the Swedes are justly proud of the ways they have employed (and are employing) technology to answer contemporary urban concerns, including resource consumption.

The house at Sundbyberg depicted in miniature is effectively the world’s most eco-friendly high-rise; it employs no artificially created materials such as steel or concrete. As its developer, Arvet, notes, the global construction industry accounts for 40 percent of worldwide carbon dioxide emissions. Buildings made entirely of trees, such as those like Sundbyberg, do just the opposite and take half the time to construct. They also encourage reforestation and provide a range of eco-friendly jobs. Cities of the future, Arvet argues, will start out as trees, or so we should hope.

But “Urban Challenges” doesn’t just focus on the Nordic romance with wood. Anyone who has owned an Ericsson phone, driven a Volvo, Skyped with a friend, danced to music on Spotify or played Minecraft knows something about Swedish technological innovation. “Urban Challenges” suggests a holistic, more democratic approach to urban planning that puts cutting-edge design technology in the hands of ordinary citizens.

At one of the several interactive stations in the exhibit, visitors can use software developed through Minecraft — the brainchild of Swedish gaming pioneer Markus Persson — to explore the redevelopment of neglected urban spaces. They can place virtual reality “buildings” into landscapes much as they would in the game itself. Similarly, Swedish communications giant Ericsson is working with UN-Habitat to simulate “mixed reality” design scenarios by which users can place virtual buildings into existing cityscapes. The idea behind both initiatives is to democratize future urban planning, giving ordinary citizens a voice in reshaping the places where they live.

Of course, green building and democratic design will mean little if transportation — one of the greatest sources of global carbon emissions — does not become more eco-friendly. “Urban Challenges” offers a response to that, too, in the form of electrified roadways, extending the traditional idea of the electric streetcar to the modern transportation highway. Visitors can study an interactive highway map illustrating Sweden’s implementation of the “Elways,” described as the world’s first stretch of electric public road for heavy commercial trucks. Begun in 2016, the “Elways” experiment is now being studied by the Swedish transportation authority with an eye to electrifying more of the nation’s transportation infrastructure.

One cannot explore the small “Urban Challenges” exhibit without being struck by its own surrounding environment, the gleaming glass-and-wood House of Sweden standing above the confluence of Rock Creek Park and the Potomac River. In many ways, the building reflects the ideas and values that the exhibit wishes to promote, with its linear design, blonde wood, intricate waterfalls and wide windows looking out onto some of Washington’s most beautiful natural vistas. Transparency, openness and respect for the environment seem to be its calling cards, as the “Urban Challenges” exhibit suggests. What better design could there be for the future?