Artist Rirkrit Tiravanija grew up in a diplomatic family — and with that morsel of insight, his thrilling exhibition combining food and protest at the Hirshhorn takes on an even deeper layer of meaning.

Tiravanija is the son of a Thai diplomat who was born in Argentina but raised in Thailand, Ethiopia and Canada. Today, he lives between New York, Berlin and Chiang Mai in northern Thailand.

His nomadic, cross-cultural background defies easy classification — as does his art. For over 30 years, Tiravanija has used communal food-based experiences and protest imagery to break down the barriers between object and spectator while encouraging interaction and exchange in real time.

“Rirkrit Tiravanija: (who’s afraid of red, yellow, and green)” bustles with energy. On Thursdays through Sundays at lunchtime, the Hirshhorn transforms into a canteen, with free food from Washington’s Beau Thai restaurant on offer in the gallery. Visitors can grab bowls of red, yellow or green curry — I can vouch for the red, the spiciest on offer — and sit down amid stark black-and-white drawings of protests in Thailand and the United States.

Two or three artists are in the gallery every day of the exhibition, propped up on scaffolding or crouched in corners adding charcoal pictures of violence and defiance directly on to the walls.

“They’re in a weird way kind of collaging the history together, and the images,” curator Mark Beasley told The Washington Diplomat. “And the idea is that if this ran for a year, the walls would be entirely covered in charcoal. It’s the addition and erasure of images over time, so it builds up to a critical mass of images. As an acquisition, it’s not painting or sculpture. It’s very much a lived work.”

The colors in the title do reflect the curry, but they ultimately refer to the colors worn by the competing factions in recent Thai government protests. That history of protest is infused here with our own notable protest culture on the National Mall, with images of suffragettes, Civil Rights-era demonstrators and protesters from recent gatherings layered upon the wall. It’s a striking, unsettling display.

With a bowl of curry in hand and wooden stools scattered around the exhibition space, visitors are encouraged to sit down and eat. The food is a great, delicious draw — I overheard one person comment that they were relieved they wouldn’t have to track down lunch in the food desert that is the National Mall — but it’s also a smart tool. It demands that museumgoers stay in the space, eating, chatting and looking at the art. It even prods communal behavior that might not fly in a normal restaurant outside the confines of a museum, as visitors, myself included, started conversations with strangers in the gallery.

“It’s very social. It’s kind of like performance — it’s socializing the artwork. We all get eating and chatting, and I think that’s how Rirkrit sees it. It’s this kind of glue that keeps stuff together. And it means that people stay with it maybe a bit longer than they normally would,” Beasley said. 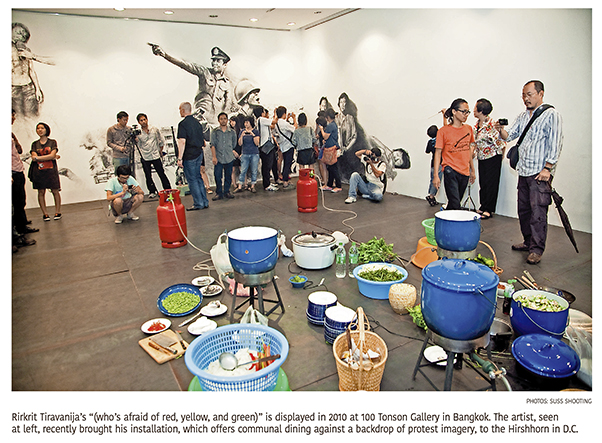 “You never know how a work like this is going to play out until you’re in it,” he added, noting that in the exhibit’s first week, he said he was struck by how you could be casually eating and talking one moment, and then look up and become transfixed by the art surrounding you.

“There are pretty strong images here. And it’s kind of interesting how the work operates on you. You get caught up by it. You start to relax and to chat and then you go, ‘Wow.’”

When the food isn’t in the space, the exhibition takes on a more “contemplative” vibe, the curator said. But it’s with the clinking of utensils and the sensory explosion of delicious smells emanating from the curries being served that the exhibition emerges into its most fulfilling form.

“When the food’s not here, it’s a very different atmosphere. Personally, this is the environment where the work comes alive for me. You feel it. It’s a different energy,” Beasley said.

He told us that when he first talked to Tiravanija and learned that he was the son of a diplomat, the artist’s personality and the communal environment he creates instantly clicked for the curator.

“So, I realized all this kind of hosting, all the courtesy, it’s really the tidemarks of his background. He’s an incredibly generous host,” Beasley said. “When I met him, I was like, this is it — you put people at their ease and you set up a space. And sometimes he trips them up. He was saying that all of his friends are all diplomats. And he kind of vowed early on that he wasn’t going to do that, but he was going to think through that in another way.”

And his way — interactive dining mixed with protest art — has been unconventional but effective. Beasley described it as “relational aesthetics.”

“It’s a very unwieldy term, but with Rirkrit it makes total sense. It’s like us, together, makes something. That’s diplomacy.”