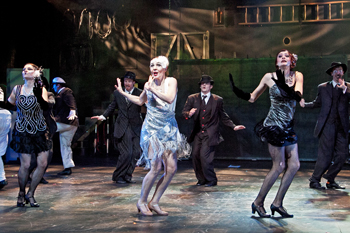 Irina Tsikurishvili stars as Viola, above, in Synetic Theater’s production of “Twelfth Night.”

Synetic Theater should be riding high. Not only does the eclectic thespian company knock it out of the park with its surprisingly different and clever adaptation of Shakespeare’s “Twelfth Night,” but Washingtonian magazine last month put the icing on the artistic cake by naming co-founders Paata and Irina Tsikurishvili “Washingtonians of the Year.”

The award is well deserved, especially in light of the entertainment value of its recent genius.

With its current production, which happens to be Synetic’s 10th “silent Shakespeare” adaptation, the company takes a well-calculated and clever risk. While thinking outside the box is not new for Synetic, whose trademark is wordless versions of theater classics, after seeing this collaboration of “Twelfth Night,” one might forget the metaphorical box ever existed.

This attempt is perfectly timed, as Synetic was falling prey to too much repetition. The Tsikurishvilis, Georgian artists who moved to the United States in the 1990s, have carved out a unique niche for themselves in the vibrant D.C. theater world by being a “physical theater company,” which retells tales through a dance lens. “Twelfth Night” strays from the group’s usual heavy-handed diet of serious, intense modern dance and acrobatics and takes a chance on mime, slapstick comedy and swing by placing the Bard’s tale in a silent movie during the roaring ’20s. This decision firmly secures Synetic’s foothold as a theater company to be reckoned with, and not one content with being classified as merely a dance ensemble.

This crazy idea — the marriage of 17th-century “Twelfth Night” and a silent ’20s film — is not that far-fetched. The Bard’s comedy is the madcap tale of brother-and-sister duo Sebastian and Viola, who are the sole survivors of a shipwreck and find themselves entangled in the frivolous and incestuous lives of the rich and narcissistic Lady Olivia and the dashing but shallow Duke Orsino. Staging the play as a slapstick silent movie is merely taking Shakespeare’s satire a couple of steps further and more deeply exploring its comic dimensions.

Paata Tsikurishvili writes: “The play’s mixture of uproarious humor and touching pathos is at once baffling and beguiling, much like the films of some of my great artistic heroes, Charlie Chaplin and Buster Keaton. Even more, the play’s structure — a series of brief, tightly constructed farcical scenes and subplots — has always caused me to think of ‘Twelfth Night’ as one of the most cinematic of Shakespeare’s plays, much in keeping with Synetic’s own style, which has been described as similarly lean and cinematic.”

The Tsikurishvilis are trained in innovative dance, theater and film, after all. It was only a matter of time until they combined all three talents into one production.

The result is that “Twelfth Night” explodes anew on stage in a sort of dreamlike transformation — a theme Shakespeare experiments with in many of his comedies. The script is now a wordless screenplay, run by the resident “fools,” Feste and Fabian, who have transformed into clowns (albeit more flexible than the average circus ones), holding the projectors and directing the chaos on stage. This all takes place on Phil Charlwood’s rudimentary set — dark and minimalistic, resembling an industrial basement — with a scrim for projecting bits and pieces of the final project, as well as some of Shakespeare’s lines from “Twelfth Night,” just as lines would appear to guide the action of a silent film. 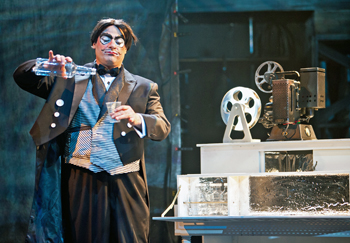 Feste (Ben Cunis) and Fabian (Vato Tsikurishvili) waddle silently on stage before the lights dim and commence their amusing antics while ushers are still seating the patrons. Even before the play’s action officially begins, fans of lampoonish caricatures are whetting their appetite for what’s to follow.

Perhaps the most impressive makeover is Irina Tsikurishvili as Viola, our heroine. Irina, usually tersely powerful in a dramatic lead, is almost unrecognizable as the perfect embodiment of Chaplin’s tramp, disguised as a male servant to be near her new heartthrob, Orsino. Irina is lithe and seamless in her dance movements and miming and perfects the wistful animation of silent, unrequited love. In her hands, a simple balloon becomes a heavily weighted object, and she shows off her Jitterbug and Charleston prowess with Orsino (played deftly by Philip Fletcher).

Another stage stealer is the character of Olivia, the apple of all men’s eyes, played hilariously by Kathy Gordon in a flapper dress and black veil, as she is in deep, self-important mourning over her dead brother (catch the symmetry to Viola and Sebastian, who are fraternal twins?). Olivia spends most of her time replaying the film reel of her dramatics during her brother’s funeral, to the distraction and dissatisfaction of her drunkard uncle, Sir Toby Belch (Hector Reynoso); his foolish friend Sir Andrew Aguecheek (Dallas Tolentino); her ditsy maid Maria (Irina Kavsadze); and last but not least, her prudish butler Malvolio (Irakli Kavsadze).

No one in the cast is weak; it’s just a matter of deciding who is funnier at a given moment. That verdict changes often as this rapid-fire show — which alternates between pranks, comic bits and incredible dance numbers — speeds along to a satisfying finish.

Leaving the theater, with a smile on your face and hands that are sore from clapping, you’ll likely vow to sign up for that swing class you’ve been meaning to take. At the very least, all will concur that it don’t mean a thing if it ain’t got that swing.