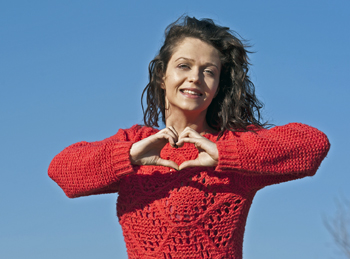 Feb. 7, 2014, marks 50 years since the Beatles first set foot in America, 110 years since the Great Baltimore Fire of 1904, and the inauguration of the XXII Winter Olympic Games in Sochi, Russia.

But for many Americans, the first Friday of this month stands out as a red-letter day for an entirely different reason: It’s National Wear Red Day, when both men and women across the United States plan to wear red in unison to call attention to women’s heart health. While breast cancer and its related pink campaigns often attract national attention, heart disease kills more women than all forms of cancer combined.

The program is sponsored by the Heart Truth, a project of the Bethesda-based National Institutes of Health. Since its founding in 2002 by NIH and the American Heart Association, the program’s symbol has been a stylized red dress. It’s aimed primarily at women ages 40 through 60, though younger women are also at risk for heart disease — especially if they’re of African or Hispanic descent.

In fact, says the American Heart Association, on average, Hispanic women are likely to develop heart disease 10 years earlier than other women. Despite that heightened risk, most are still unaware of the threat to themselves and their families. That’s why the campaign has lately been making a concerted effort to reach women in Spanish-speaking communities and tell them about this “silent killer” lurking in their midst.

“We hope this sea of red across our country leaves a lasting impression on every woman, communicating the hard truth that she may be at risk for heart disease, the number-one killer of women,” said Ann Taubenheim, chief of health campaigns and consumer services at the National Heart, Lung and Blood Institute, a division of NIH. “We also want this day to remind women that they can control their risk and protect their hearts, starting with a visit to the doctor to learn about their personal risk factors.”

“Most women think their biggest risk of dying is from breast or ovarian cancer. But a post-menopausal woman is much more likely to die of coronary heart disease,” said Grossberg, a board-certified, noninvasive cardiologist with a special interest in preventive cardiology, risk factor modification, coronary artery disease, and treatment of high cholesterol and other lipid disorders.

However, other risk factors like obesity, high blood pressure, diabetes and high cholesterol can be modified through common-sense dieting and exercise. Smoking and a sedentary lifestyle should be avoided at all costs, he said.

“Obviously, if you’re 30 years old and you smoke four packs a day, you already have a problem. But the risks are much higher after menopause,” he said. “With exercise, your goal should be at least 30 to 40 minutes of brisk walking four to five times a week. And the cigarette smoking has to stop.”

Evidently, women are starting to listen to their doctors — and the red dress may have something to do with that.

In the 12 years since NIH introduced the Heart Truth, heart disease deaths among American women have declined, while awareness of heart disease among women has nearly doubled. The government agency says more than half of women now know that heart disease is their leading cause of death, up from 34 percent in 2000. Furthermore, awareness is leading to action. In 2009, 48 percent of women reported discussing heart disease with their doctors, up from 30 percent in 1997.

According to the American Heart Association, 34 percent fewer women died from heart disease in 2013 than in 2003, which translates into 330 lives saved every day. Moreover, 37 percent of women are losing weight, 43 percent are checking their cholesterol, 50 percent now exercise more than before, and 60 percent have improved their diets. In addition, 15 percent have quit smoking, while registration for the association’s Go Red For Women campaign exceeds 1.75 million people.

Other factoids: More than 25 million Red Dress Pins have been worn to support the cause, at least 185 cities now host Go Red For Women events and luncheons — and more than 2,000 landmarks across the nation light up in red on National Wear Red Day.

Meanwhile, the NIH says that, “Women who reported recently seeing or hearing about the red dress or the campaign were substantially more likely than other women to take at least one risk-reducing action as a result. More women are living longer, healthier lives, and fewer are dying of heart disease.”

That’s why so many first ladies have gotten in on the act. Laura Bush served as the program’s national ambassador from 2003 to 2009 as part of her Women’s Health and Wellness Initiative. And the First Ladies Red Dress Collection — featuring red dresses and suits worn by 14 of America’s first ladies, including Michelle Obama, Hillary Rodham Clinton, Barbara Bush, Nancy Reagan, Pat Nixon, Lady Bird Johnson and Jacqueline Kennedy — has been exhibited everywhere from Washington’s Kennedy Center to the National First Ladies’ Library in Canton, Ohio.

After that, Dr. Gary Gibbons, director of the NHLBI, participated in a Twitter chat with U.S. Surgeon General Dr. Regina Benjamin that “trended” nationwide, meaning it was one of the most-followed topics on Twitter that day.

National Wear Red Day is so popular that it’s now spread to the United Kingdom, where it’s celebrated annually on Feb. 26 and sponsored by the British Heart Foundation.