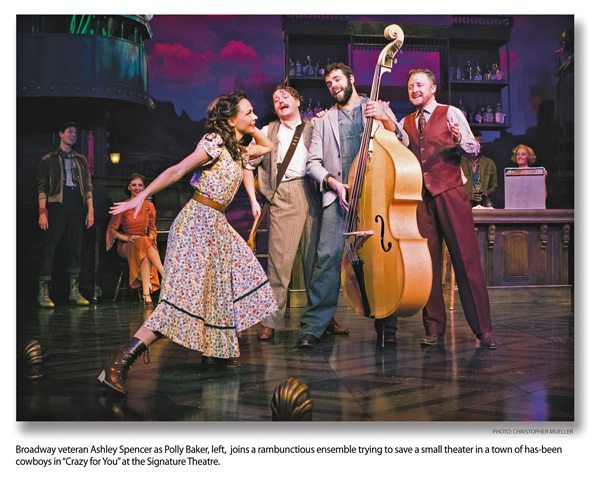 Tap dancing and Gershwin – what’s not to love?

Humming the prolific composer’s iconic tunes with plans to finally learn how to dance like Fred Astaire and Ginger Rogers would be a normal response after witnessing the genius that is Signature Theatre’s production of “Crazy for You.”

Even compared to the overabundance of remarkable plays and musicals brought to life under associate artistic director Matthew Gardiner’s leadership, this high-octane gem is close to perfect.

Signature made a clever choice to reward likely downtrodden Washingtonians who’ve been otherwise saturated with political scandals with this feel-good production in time for the holidays.

It would have been hard to go wrong with a play featuring music by George Gershwin; lyrics by his brother Ira Gershwin; and book by Ken Ludwig, which rightfully won the 1992 Tony Award for Best Musical.

With a show largely based on the Gershwin team’s 1930 musical “Girl Crazy,” adapted into a movie starring Judy Garland and Mickey Rooney, one can expect sentimentality, heartfelt timeless tunes and, yes, a dash of welcomed corniness. This, my friend, is the perfect blend for holiday cheer. 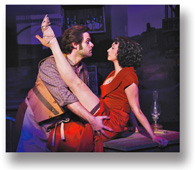 Let’s start with Broadway veterans and triple-threats Danny Gardner and Ashley Spencer, who portray Bobby Child and Polly Baker, respectively. Gardner, who has a lengthy resume as an actor and choreographer, plays Bobby, a musical-loving, trust-fund New York banker ordered by his overbearing mother (a delightfully feisty Sherri L. Edelen) to travel to the Wild West and foreclose on a small theater in a town named Deadrock. There awaits Polly, the only lass left in a forlorn town of has-been cowboys, who threatens to get even with Bobby because she is the daughter of Everett Baker, the owner of the once thriving Gaiety Theater — Bobby’s target.

As one can imagine, the plot follows the well-worn formula of boy meets girl, boy falls for girl, girl hates boy and so on, with an ending that isn’t exactly a surprise. But that’s the beauty of it all. Make no mistake: this play is far from trite. In fact, it parodies its own triteness, as well as numerous other infamous references, keeping audiences poised and alert for the next satirical joke.

Bobby loudly exclaims, “Let’s put on a show!” in an effort to save the Gaiety Theater and win Polly’s affections, referencing Mickey Rooney’s hackneyed line of in “Girl Crazy.”

The townsfolk lament their show’s ability to attract only two customers: Eugene and Patricia Fodor, quirky British tourists writing a guidebook on the American West. The reference to the popular travel manuals is obvious. The Fodors’ song “Stiff Upper Lip” to the dejected cast makes fun of the barricade scene from “Les Misérables.”

Meanwhile, the Zangler Follies — a bevy of scantily clad, tap-dancing and high-kicking chorus girls from the New York Zangler Theater where Bobby flubs his dance audition — riff on the real-life Ziegfeld Follies of the 1930s, which featured beautiful chorus girls in elaborate theatrical revues. 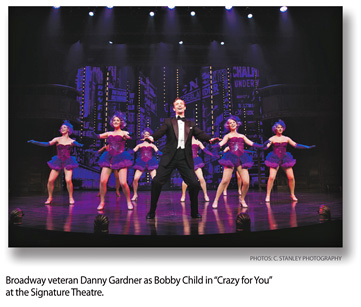 The show’s vigorous pace is propelled by intricately difficult and expertly executed tap dancing (via choreography by Denis Jones). The razor sharp slapstick and fast and furious one liners, mixed with infectious charm, seem effortless from this talented cast.

Spencer as Polly executes a red-hot “I’ve Got Rhythm” number with the company, and croons the lovesick “Someone to Watch Over Me” and “But Not for Me” with an innocence that will melt the biggest cynic in the house.

Gardner and Spencer glide their way through the classic “Embraceable You,” transporting us back to the glorious days of Fred and Ginger Hollywood glamour.

Other cast talents include Bobby Smith, as the crotchety and lecherous Bela Zangler, owner of the Zangler Theater, and Natascia Diaz, the wealthy and demanding Irene Roth, Bobby’s jilted fiancé.

The show is topped off with period costumes by Tristan Raines and elaborately detailed sets by Paul Tate dePoo III.

If joyful escapism is what the doctor ordered, run, don’t walk down to the Signature Theatre and see what a little farce and fluff can do for you.