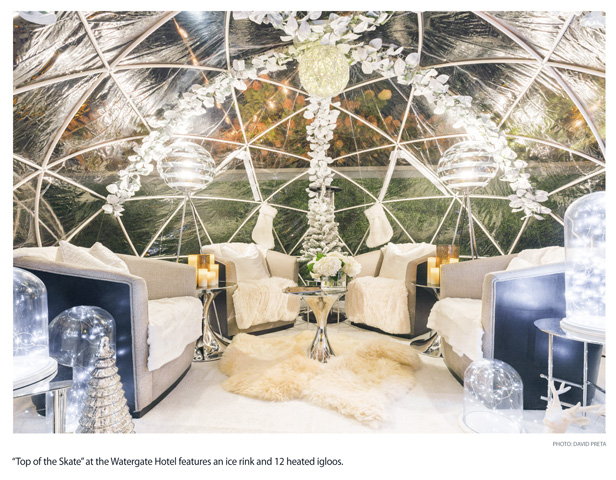 This time of the year can be dark and dreary, but that doesn’t mean wintertime in Washington doesn’t have its bright spots. We put together plenty of interesting ideas for you to get out and enjoy the season based on local advice, including the hotel experts who are some of the most reliable insiders around town. You may even discover that winter may be the best time of year to explore a snowy — and sleepy — nation’s capital.

Elliott L. Ferguson, president and CEO of Destination DC, says that D.C. is a wonderland of options, “whether your ideal winter getaway includes a family photo at the Martin Luther King Jr. Memorial; an afternoon of ice skating at the National Gallery of Art’s rink and a Michelin-star dinner; or a matinee in a plush theater followed by an exhilarating ride on the water taxi to The Wharf and high-octane night at The Anthem.”

Even though the holiday season is technically over at the start of 2018, there are still plenty of ways to soak up the festive spirit in late December and early January.

Head over to the Ritz-Carlton on 22nd Street to see a 30-foot-tall edible gingerbread replica of the Washington Monument. The outer structure is made of baked goods and candy while the entire creation incorporates 900 pounds of icing, 600 pounds of white gingerbread sugar dough and 251 layers of stacked gingerbread stones.

At the St. Regis, every Thursday and Friday in December features holiday-inspired live jazz music by Christopher Linman in the lobby, where guests can indulge in some hot cocoa and cookies by the fire.

Or kick off the season with a staycation at the Rosewood Hotel in Georgetown. Its Winter in Washington package includes a two-night minimum stay; hot chocolate and cookie-decorating for two; breakfast for two; an ice-skating experience at the Washington Harbor; and a selection of two seasonal cocktails at the Rye Bar. The package runs through the end of February.

Speaking of cocktails, POV, the rooftop bar of the W Hotel, boasts a quirky seasonal cocktail menu with concoctions like “Andy’s Harvest Punch,” made with Cointreau, allspice dram, cranberries, cinnamon, brown sugar and lemon, as well as “The Side Chic,” made with Martell VSOP, maple and lemon.

If you prefer exercise over imbibing, the Watergate Hotel recently debuted an ice skating rink on its roof. Dubbed “Top of the Skate,” the rink offers a one-of-a-kind synthetic skating rink with plenty of amenities. One that sounds particularly intriguing are the Next Whisky Bar Igloos, actual 12-foot heated domes on the Watergate’s outdoor terrace that are available for parties of two to eight. There are four different experiences you can add to your “igloo” experience: a three-course dessert tasting menu and pairing of wine, cordial or tea; a whisky flight, burger and cigar; or a “romantic night out.” The rink and igloos will be available all winter long.

“We wanted to create fun, yet upscale winter offerings you can’t find anywhere else in Washington, D.C. at the Watergate Hotel,” said Rakel Cohen, the co-owner and senior vice president of design and development for Euro Capital Properties. “The igloos, for example, are meant to make guests feel like they are in a winter wonderland snow globe. As far as the Top of the Skate, it’s just good old-fashioned fun. You can skate around on the synthetic ice rink or enjoy s’mores and mulled wine by our rooftop fire pits, all while taking in our unparalleled 360-degree views of D.C. Between our two new winter venues, we offer activities for the whole family … and definitely some amazing photo opportunities at each, too.”

For a more classic D.C. ice rink experience, head over to the National Gallery of Art, where you can glide around the Sculpture Garden surrounded by contemporary masterpieces through March 11.

Meanwhile, the Potomac-side rink at the newly opened Wharf along the Southwest Waterfront joins the party of neighborhood rinks in Georgetown and the Capitol Riverfront. The massive $2.5 billion development project also features 20 trendy new restaurants and shopping at about 15 stores, including a 2,300-square-foot Politics and Prose Bookstore and Harper Macaw, the first store of a local chocolate manufacturer. Other highlights of D.C.’s newest hotspot include the 57,000-square-foot Anthem concert and events venue, as well as a cozy fire pit and a cobblestone street lined with intimate music venues (also see “$2.5 Billion Development Project Set to Transform Southwest Waterfront” in the December 2017 issue). 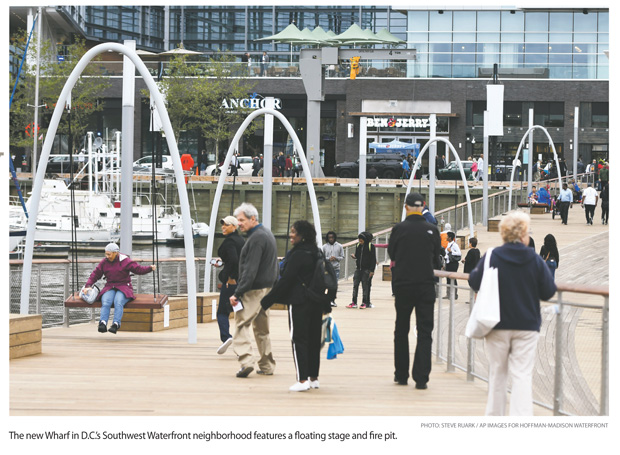 “Washington has a brand new Wharf. It is an opportunity to relish in the newest amenity D.C. has to offer, take in a show at the Anthem, a drink or meal at one of the fab new restaurants or stroll down the promenade,” said Hector Torres, general manager of the Beacon Hotel & Corporate Quarters, which is offering various complimentary perks for winter meetings booked through March 31. “One comment I heard from a friend was, ‘Is this really Washington?’ It puts D.C. in a very different light, creating a new paradigm of hipness and pride in our city from a local perspective, not to mention a new amenity that is great for visitors from out of town to explore.”

Torres added: “The only issue is I miss the quiet that was once Southwest D.C.”

If the weather isn’t cooperating and outdoor activities aren’t an option, there are plenty of indoor diversions. You won’t want to miss the 2018 Women’s Voices Theater Festival, running from Jan. 15 to February 15. The second edition of this citywide festival, chaired by actress Allison Janney, unites 26 theater groups across the region to present works by women playwrights and cast a light on the issue of gender parity in American theater.

Other local theater offerings in January include “Hamlet” at the Shakespeare Theatre from Jan. 16 to Feb. 25 and Synetic Theater’s take on Franz Kafka’s “The Trial” from Jan. 17 to Feb. 18.

More in the mood to admire a Lamborghini Spyder than Shakespeare or Kafka? Then check out the Washington Auto Show, which runs from Jan. 26 to Feb. 4 at the Washington Convention Center. Expect to see hundreds of production models and unique cars from 35 manufacturers. There will also be a contest sponsored by Hyundai and celebrity appearances.

This year, plan to celebrate Mardi Gras unlike any year before. Union Market’s Dock 5, a popular spring and summertime spot, is going to be transformed into the largest Fat Tuesday block party to ever hit D.C. The extravaganza, which begins at 6 p.m. on Feb. 28, includes Southern-inspired street food and cocktails from the city’s top chefs and mixologists.

If you need ideas to celebrate Valentine’s Day with a loved one, Destination DC’s “Date Nights DC” campaign offers a plethora of romantic date options with discounts on area hotels, restaurants and more. One quirky excursion: Check out the love letters at the National Postal Museum.

If you’re looking to take your relationship to the next level, the Hay-Adams is offering an elaborate Proposal Package. Sweep your sweetheart off their feet with a meticulously planned proposal experience at the stately hotel that includes fresh flowers, chocolate-covered strawberries and champagne. You’ll also be able to indulge in a two-hour tour of private monuments by night and a relaxing breakfast the next morning.

If you’re looking to plan a staycation this winter, the Hay-Adams also has a Discover D.C. Family Package. It includes a full American breakfast and a backpack full of fun for the young ones, with a baseball cap and lots of goodies.

For a more grown-up outing, revel in the classic tale of love and fate with The Washington Ballet’s rendition of John Cranko’s “Romeo & Juliet,” set to Prokofiev’s dynamic score, from Feb. 14 to 18 at the Kennedy Center.

For an all-out extravagant experience to celebrate another couple’s modern-day love story, Kimpton’s Hotel Monaco in Penn Quarter is offering a Royal Engagement package in honor of newly betrothed Prince Harry of Wales and American actress Meghan Markle. At $10,000 a night, the package includes a one-night stay in the luxurious 810-square-foot Robert Mills Presidential suite; a private consultation with a local jeweler; a bespoke suit in honor of Markle’s show “Suits”; dinner courtesy of Dirty Habit; in-room couple’s massage; champagne; flower arrangements; the use of a private car; and a donation to United Nations Women, Markle’s favorite charity. Plus, you can imbibe on two “When Harry Met Meghan” gin and Earl Grey tea cocktails crafted by bartender Sarah Ruiz.

Are you looking for something simpler in the form of a nice, cozy fireplace? A variety of D.C. restaurants and hotels offer dining by a warm fire, including 1789 Restaurant; Plume in the Jefferson Hotel; Bourbon Steak at the Four Seasons; Blue Duck Tavern in the Park Hyatt Hotel; Dirty Habit at the Hotel Monaco; the Dignitary at the Marriot Marquis; Quadrant Bar & Lounge at the Ritz-Carlton; and Art and Soul in Capitol Hill.

At the Hirshhorn, visitors can travel back in time with “Brand New: Art and Commodity in the 1980s (Feb. 14-May 13), the largest museum exhibition to explore the collision of art and commerce in the 1980s, an iconic decade when artwork emerged as a product and the artist became a brand.

At the Arthur M. Sackler Gallery, “The Prince and the Shah: Royal Portraits from Qajar Iran” (Feb. 24-Aug. 5) highlights the importance of painted portraits and studio photographs in 19th-century Iran.

Finally, throughout the month of February, Buttercream Bakeshop on 9th Street, NW, is bringing back its #RemembertoBeKind campaign. For the entire month, customers can buy any bakery item and gift it to another customer, with a handwritten note that will hopefully brighten their day. 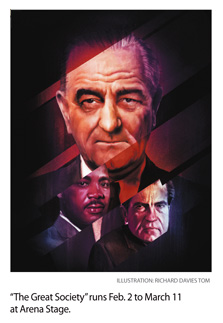 The National Gallery of Art is hosting a wide-ranging slew of shows throughout the winter and spring, including: “Michel Sittow: Estonian Painter at the Courts of Renaissance Europe (Jan. 28-May 13); “Outliers and American Vanguard Art” (Jan. 28-May 13); “Sally Mann: A Thousand Crossings” (March 4-May 28); and “Cézanne Portraits” (March 25-July 1).

Arena Stage is spotlighting two timely politically themed shows: “The Great Society” examines how President Lyndon B. Johnson tries to maintain his relationship with Martin Luther King Jr. while completing a raft of impossibly ambitious social projects. And “Hold These Truths” tells the true story of Gordon Hirabayashi, the American son of Japanese immigrants who defied an unjust court order to uphold the values on which America was founded.

On a lighter note, sports is always a great way to ease into spring. Beginning March 7 at Capital One Arena is the 2018 Atlantic 10 Men’s Basketball Tournament Championship. There will be 14 teams competing, including local ones like the George Mason Patriots and George Washington Colonials.