Home The Washington Diplomat January 2018 International Students in U.S. Surge to Over 1 Million for Second Year in a Row 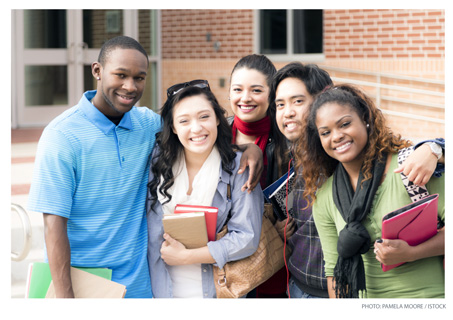 For the second year in a row, more than 1 million international students came to study in the U.S., but the 2017 Open Doors Report on International Educational Exchange also reveals a mixed bag when it comes to America’s global appeal.

At the same time, much of the recent growth came from foreign students already in the U.S. who chose to continue their studies here, as opposed to a surge of fresh arrivals. In fact, the number of new students enrolled at a U.S. institution in fall 2016 declined by nearly 10,000 students to about 291,000, a 3.3 percent decrease from the previous year. This is also the first time that these figures have dipped in the 12 years since Open Doors began reporting on new enrollments.

IIE attributed this flat-lining to various factors, including expanded higher education opportunities at home, declining populations and the scaling back of popular Saudi and Brazilian government scholarship programs that brought droves of students to the U.S.

A smaller snapshot of 500 colleges and universities revealed a similar trend. That separate online IIE survey, conducted in the fall of 2017, reported a decrease of 7 percent in the number of new enrolled students. But these numbers were not evenly distributed: 45 percent of campuses reported declines in new enrollments for fall 2017, while 31 percent reported increases and 24 percent reported no change from last year. 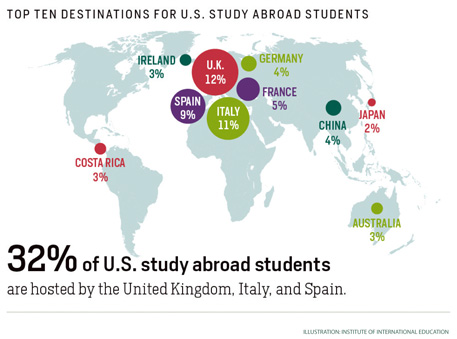 “Institutions attributed this decline to a range of factors, which include their concerns about growing competition from other countries and institutions, their concerns around visa processing delays and their concerns around the continuing rising cost of U.S. higher education,” said Rajika Bhandari, director of IIE’s Center for Academic Mobility Research and Impact, during a briefing on the report’s launch on Nov. 13.

Another looming worry is President Trump’s immigration policies, which include a controversial travel ban and more extreme vetting of foreign travelers. “We did hear from some institutions that they are concerned about both the social and political climate in the U.S. this year, and they’re particularly concerned about students from the Middle East, but also students from Asian countries like China and India,” Bhandari said.

She added that experts will be better able to assess the ramifications of Trump’s tightened border policies later this year. “We’re really only going to know the full picture in fall 2018. Some [institutions] will see increases, some will see declines, others will be flat,” Bhandari said.

An official from the State Department Bureau of Consular Affairs who was in the audience pointed out that despite the increased scrutiny under Trump, “legitimate travelers should have nothing to fear from the new screening procedures.” He added that “American campuses are sending out strong messages of welcome,” citing efforts such as the #YouAreWelcomeHere campaign to attract international students.

The outreach is crucial to many schools’ bottom lines. In 2016, international students contributed $39 billion to the U.S. economy through spending on tuition, room and board and living expenses, according to the Department of Commerce. 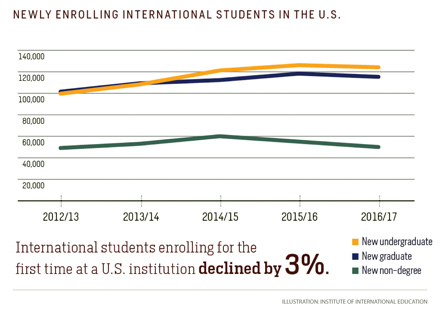 IIE also notes that international students often serve as teaching and research assistants that support many campus departments, especially in the critical STEM fields (science, technology, engineering and math). In fact, nearly half of international students in the U.S. are STEM majors. Their diverse backgrounds also enrich the classroom experience for U.S. students — which in turn helps young Americans compete in a globalized world.

“Countries and multinational employers around the world are competing to attract top talent. As more countries become active hosts of international students and implement national strategies to attract them, the competition for top global talent in higher education and the workforce will only intensify,” IIE President and CEO Allan E. Goodman said in a press release. “Students continue to be attracted to the high quality and diverse opportunities offered by U.S. colleges and universities. But it is critical for U.S. institutions to set strategic goals and be proactive in reaching out to students and families in a wide range of countries in the coming year, and for the United States to keep its academic doors open to students from all over the world.”

“The good news is that institutions reported working very hard to keep their doors open,” Bhandari said, noting that China continues to be a big recruitment draw for U.S. institutions, along with Vietnam, India, South Korea and Japan.

China by far ranks as the top host country for international students in the U.S., with over 350,000 Chinese students coming last year. The largest growth, however, was from India, which came in second place with 186,000 students. Together, China and India alone account for roughly 50 percent of the total enrollment of international students in the United States. Rounding out third and fourth place were South Korea (58,000) and Saudi Arabia (52,000). There’s also been strong growth from South Asian countries, including Pakistan, Bangladesh and Nepal.

International students currently make up 5.3 percent of all students in the U.S., with California, New York, Texas and Massachusetts being the top destinations for them. 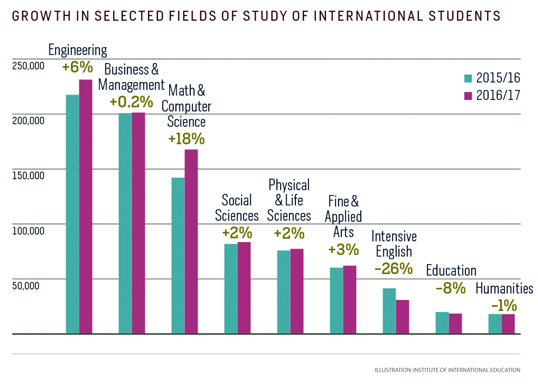 Throughout the world, today’s students are increasingly mobile in seeking higher education opportunities outside their home countries. According to IIE, there were a total of 2.1 international students in 2001. Today, that figure is 4.6 million. While Bhandari said that America’s overall share of these global students has somewhat decreased, that is not necessarily a poor reflection on the U.S. education system, but rather a sign that other nations’ education systems are improving. She also notes that the U.S. has far more capacity than similar countries such as the U.K., Canada and Australia, with over 4,000 institutions of higher learning.

Like their international counterparts, Americans, too, are increasingly going abroad to broaden their horizons. In the 2015-16 school year, over 325,000 American students received academic credit for study abroad programs, an increase of 4 percent over the previous year. Study abroad by American students has more than tripled in the past two decades, although the rate of growth had slowed following the financial crisis in 2008.

The top host destinations for Americans studying abroad were the United Kingdom, Italy, Spain, France and Germany. Europe, in fact, was the top host region, attracting more than 50 percent of Americans who studied abroad. China dropped out of the top five host countries, as the number of U.S. students studying there slipped by 9 percent. 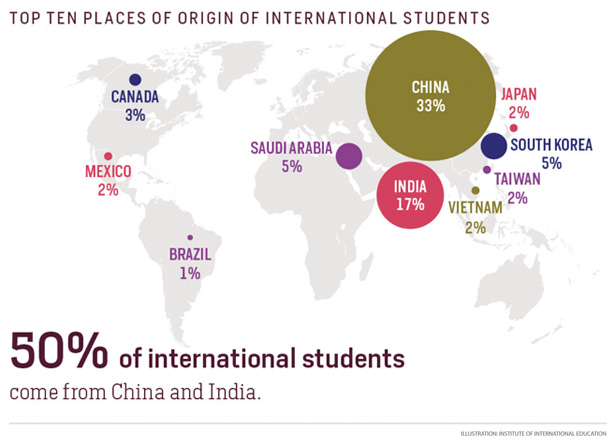 While the number of American students going abroad is at an all-time high, IIE points out that only one out of every 10 U.S. undergrads will ever study abroad by the time they graduate. That’s something IIE and the State Department are hoping to change.

“When individuals go abroad to study, they make connections that broaden their worldview. They become part of an international network of people who share the experience of navigating new and unfamiliar landscapes, languages, cultures and institutions, gaining knowledge and skills and developing resourcefulness and critical-thinking abilities. This experience is crucial for young people who compete and interact in an increasingly interconnected world,” Alyson L. Grunder, deputy assistant secretary of state for policy in the Bureau of Educational and Cultural Affairs, said at the Nov. 13 briefing, which coincided with International Education Week, a joint initiative between the State and Education Departments.

Grunder also noted that the State Department continues to promote its flagship Fulbright and Gilman Scholarship programs, as well as a global network of EducationUSA advising centers in more than 170 countries.

“International student exchange is an essential contributor to America’s economic competitiveness and national security. The U.S. higher education sector remains the global leader in welcoming students from around the world, and at the same time, we are committed to increasing opportunities to study abroad for Americans,” she said.

Education Secretary Betsy DeVos, speaking via video link, echoed that sentiment. “For example, a student in Wisconsin may need to communicate with their German counterparts about the latest auto industry technology, or perhaps a young person in South Carolina will have to understand Korean practices to successfully interact with her colleagues in a new manufacturing plant. The work our students will pursue, even in fields we can’t imagine yet, will be increasingly technical and global in nature. We must prepare them for what lies ahead,” she said.

“Students help keep America safe when they learn other languages, are exposed to other cultures and, most importantly, know the principles that make America great,” she added.

The 2017 edition of Open Doors surveyed over 2,100 U.S. institutions. The report is published by IIE, a nonprofit that has conducted an annual statistical survey on international students in the U.S. since its founding in 1919 and in partnership with the State Department’s Bureau of Educational and Cultural Affairs since 1972.