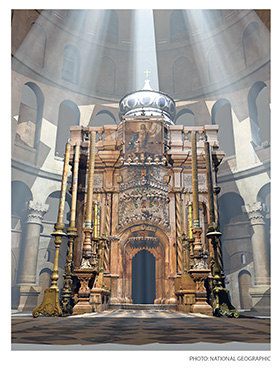 In the Christian quarter of Jerusalem’s Old City sits a domed church. Modest in its appearance, the tasteful, ancient architecture of the cathedral’s nondescript stone walls imbues it with an air of quiet immutability. This innocuous exterior, however, belies the extraordinary history of the church, which is purportedly the site where Jesus Christ was crucified and where his body was buried. Inside is an expansive and well-appointed shrine that spans multiple stories, through which hundreds of thousands of Christian pilgrims pass every year.

The church’s broad front doorway leads right into its large mezzanine area, which encircles a cavernous, multistory dome. Sunken into the heart of that dome’s rotunda floor is an ornate crypt, the marble exterior of which seems to glow softly in the dimly lit room. Through a narrow, arched entryway, one can actually squeeze inside and see the stone slab upon which Jesus’s body is said to have been laid just under 2,000 years ago. The tomb is also where Jesus is said to have risen from the dead, which is why the tomb now sits empty. It is impossible not to contemplate the tiny space’s vast cultural and religious significance.

Afterward, one is guided swiftly back to the exit, at which point the virtual tour reaches a somewhat abrupt conclusion. As the screens flicker off and the lights raise, it can be a bit jarring to find oneself standing in a small, round room on the first floor of the National Geographic Museum in downtown D.C.

This immersive 3-D tour is the main feature in the exhibition “Tomb of Christ,” which opened last November to rave reviews. An ambitious work of innovation, “Tomb” dexterously blends several different forms of media, including virtual reality (VR), and uses them to transport viewers to one of the world’s most sacred sites: the Church of the Holy Sepulchre in Jerusalem.

“It’s just a wonderful opportunity to be able to showcase the incredible magic of Jerusalem — this very complex city which is of such importance to really everyone in the world,” Kathryn Keane, the museum’s vice president of exhibitions, said.

One obvious fact about “Tomb of Christ” is that its execution would not have been possible without recent breakthroughs in technologies like VR. Keane said such modern technology plays an integral role in National Geographic’s mission “to educate diverse audiences about the cultures of the world.”

“We have a long history in photography and visual storytelling,” she explained. “I think what makes our exhibitions special is that we are able to do that kind of storytelling using all that multimedia that we’re so well known for all around the world.… There are all sorts of new tools for storytelling now, and I think we’re as fascinated as all museums are with the possibilities that things like virtual reality present, these immersive technologies and new ways to project media and new ways to experience media.”

Work on the exhibit began in earnest during the summer of 2016, when the Church of the Holy Sepulchre was closed for restorations — the first such renovation in more than 200 years. The renovation revealed that bedrock from a part of the original cave still exists within the walls of the shrine. National Geographic was invited to document the restoration process, and it took the opportunity to assiduously map out the inside of the church using 3-D imaging equipment like LIDAR, which can model objects digitally by scanning them with a rapidly pulsing laser light. 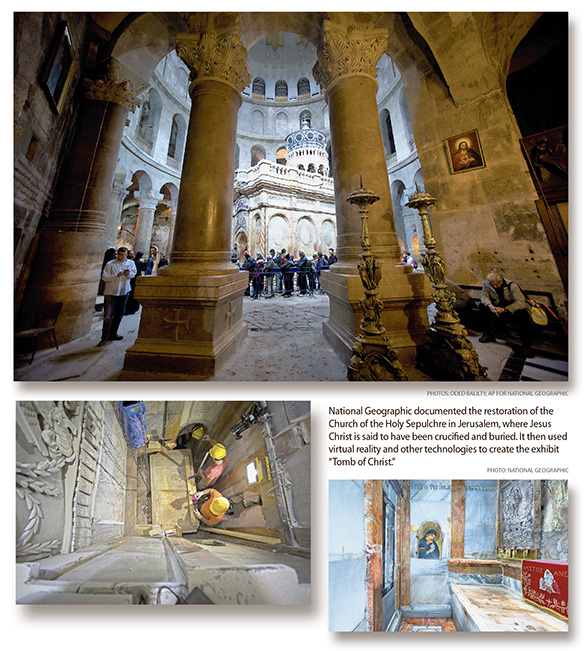 “To hear that [the church] was going to be restored for the first time in 200 years, it was sort of like the chance of a lifetime for us to cover,” said Fredrik Hiebert, archaeologist-in-residence at the National Geographic Museum, who participated in the effort. On the phone, Hiebert talked nostalgically about “the wonder of being in a place that I’d never been to and the wonder of discovering this amazing piece of history,” adding that he “wanted to bring that experience here to National Geographic, because it was absolutely unique.”

They way to do that, he said, “was this unique idea of having a virtual exhibit.”

“Tomb” offers a chance for people to experience a destination they might not be able to otherwise. In fact, at the end of February, the exhibit by default became the only way to tour the Holy Sepulchre, when the actual church in Jerusalem closed to protest a proposed Israeli plan to tax church-owned commercial properties. (It reopened days later after Israeli Prime Minister Benjamin Netanyahu announced that his government would suspend the tax plan.)

The exhibition will remain open until Dec. 31st, 2018. After that, says representative Lexie de los Santos, National Geographic hopes to “bring people to even more iconic locations in the future, locations that are in need of conservation, and get people to really care about saving these incredible places.”

In an increasingly globalized and interconnected world, it can still be difficult to appreciate the rich cultural histories of foreign places, even those of tremendous import to widespread religions like Christianity. Ironically, modern-day technology may be the key to preserving ancient sites threatened by manmade development or simply the passage of time. And immersive experiences like “Tomb of Christ” are an excellent venue for appreciating and inhabiting, however briefly, another time and place.

Tomb of Christ: The Church of the Holy Sepulchre Experience

Austin Mistretta is an editorial intern at The Washington Diplomat.