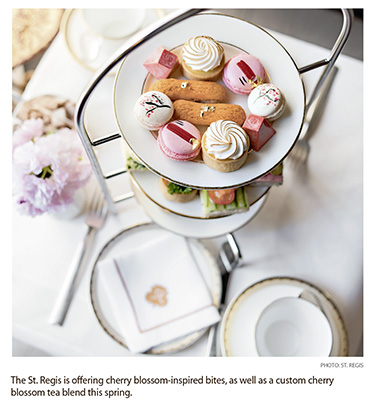 Spring is one of the best seasons to visit Washington, D.C., and not only because of the famous cherry blossoms turning the nation’s capital pink. The weather is warming up and events are starting to move back outside. Foodies excitedly watch for restaurants to change their menus to match the season, and Washingtonians head to the spa to slough away dry winter skin and prep for building heat and humidity.

Locals and visitors alike have much to look forward to in Washington this spring. The waterfront will be a particular draw this year, said Kate Gibbs, senior manager of domestic media relations at Destination DC, thanks to the Wharf, which officially opened in October 2017 (also see “$2.5 Billion Development Project Set to Transform Southwest Waterfront” in the December 2017 issue). For instance, it’s hosting the first Petalpalooza on April 7 from 1 to 9:30 p.m., including a fireworks display at 8:30. Formerly the Southwest Waterfront Fireworks Festival, Petalpalooza will include interactive art installations, games and activities, live music on three outdoor stages, a roller rink and a beer garden.

With water taxis and jitneys between the Wharf and East Potomac Park crisscrossing the Potomac River, “I think it’s going to be that serious invitation both for visitors and Washingtonians to engage in the Wharf as a transportation hub for the first time,” Gibbs said.

The Capitol Riverfront Business Improvement District is another waterfront area gaining attention. It’s home to Nationals Park, which will host the D.C. Beer Festival on April 21 from noon to 3 p.m.

Not-to-miss art exhibits now on display include “Sally Mann: A Thousand Crossings” and “No Spectators: The Art of Burning Man.” The first, at the National Gallery of Art through May 28, portrays what it’s like to be identified as a Southerner through haunting photographs of the American South. The latter, at the Renwick Gallery through Jan. 21, 2019, is “going to be a jaw-dropper,” Gibbs said. “It’s the art of Burning Man, that radical, participatory festival in the Nevada desert.”

Staycationers and vacationers also have plenty to choose from when it comes to hotel options this spring. Several new properties have opened since last year, and about 15 are in development now, Gibbs said, but the competition isn’t getting too steep.

“D.C. still has a relatively small hotel footprint compared to our reputation as a must-see place to visit, and the more hotels we have in the District, the more people will stay in the District,” she said.

To differentiate themselves, the hotels cater to different tastes and needs.

“The hotels that are in development and those hotels that just opened are addressing so many different kinds of visitors,” she said. For instance, there’s the 245-room Pod DC in Chinatown targeting guests “who don’t need their hotel to also be their living room. These are millennials, highly engaged, highly active travelers.” The Hyatt House Washington DC/The Wharf, which opened last fall, is a better bet for long-term stays because it has in-room kitchenettes and sleeper sofas. 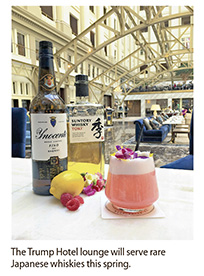 Hotels don’t have to work too hard to attract visitors this time of year, Gibbs added, but many still tout seasonal amenities. Here’s a look at some of the springtime specials:

In February, the 17-month-old hotel became one of fewer than 200 properties worldwide to earn the Forbes Five Star award. “We are now the only hotel in downtown Washington, D.C., to have this distinction,” hotel spokeswoman Patricia Tang wrote in an email. Housed in the Old Post Office Building, the hotel is offering several cherry blossom-related specials.

Through May 31, the Spa by Ivanka Trump will have the Blossom and Bloom Ritual ($350), a two-hour treatment inspired by Japanese relaxation techniques. It starts with a warm exfoliating cream followed by a cherry blossom and rice powder hydrating mask. A Thai-inspired foot massage and a full-body massage round it out. 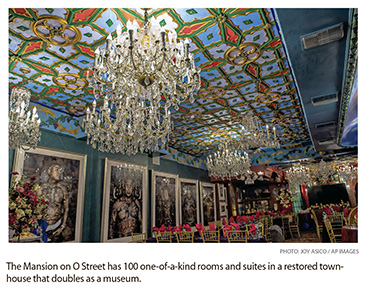 Recently named on Booking.com’s “Book the U.S.” List featuring the most unique properties nationwide and the only U.S. property ranked as a top five historic venue to explore by the Smithsonian, this hotel offers 100 one-of-a-kind rooms and suites in a restored townhouse that doubles as a museum and artist’s residence. Antiques and furnishings from around the world adorn the eclectic interior spaces, including teakwood soaking tubs from Italy and a shower made from an English telephone booth.

This season, catch concerts by Eric Taylor (April 10), the Leni Stern African Trio (May 16) and Judith Owen (May 17). Magician Richard Bloch performs monthly through August. Or book a team-building scavenger hunt ($40) to encourage teamwork, creative thinking and better communication as you search themed rooms and behind secret doors. For little ones 16 and under, there are O’Playdates ($52), which take kids on a treasure hunt through at least 60 of the mansion’s 100 rooms. Keep an eye out for its 70 secret doors.

Year-round, the hotel offers two programs. Rosa Parks stayed at the mansion on and off from 1994 to 2003 as part of the Heroes Program, which gives eligible guests a “safe sanctuary to replenish themselves.” There’s also the artist-in-residence program, which gives “anyone with a creative vision to rediscover their art and muse” a free place to stay. 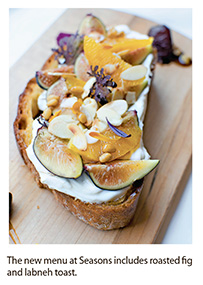 Meanwhile, Bourbon Steak Executive Chef Drew Adams is taking guests on a series of educational urban and rural foraging nature walks to look for wormwoods, fiddleheads and edible flowers. His passion for foraging informs the kitchen, where he uses local products, such as meat from Virginia’s Shenandoah Valley.

And in honor of the royal wedding of Britain’s Prince Harry and Meghan Markle on May 19, Seasons will serve London Bridges, a traditional English breakfast with two eggs, baked beans, sausage, Canadian bacon, portobello mushroom and grilled tomato ($30), as well as a soft-boiled egg with toast “soldiers,” grilled asparagus and Virginia ham ($14). Dressed as a Welsh guard, Seasons’s manager will greet diners while the wedding ceremony is streamed live. 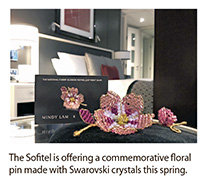 Through April 16, this 237-room hotel is welcoming cherry blossom admirers with the National Cherry Blossom Hotel Package, which starts at $279 per night. It’s partnered with Mindy Lam, a local jewelry designer, who designed a commemorative floral pin made with Swarovski crystals. Guests also receive a cherry blossom candle votive by Bernardaud, a French porcelain maker since 1863, and a Blossomtini drink on arrival. The Blossomtini is made with Absolut Elyx vodka, cherry blossom green tea, fresh lemon and honey produced from the hotel’s rooftop beehives.

Additionally, Opaline, a French bar and brasserie, is opening at the hotel this month and is participating in the 2018 Cherry Picks by the Restaurant Association Metropolitan Washington. Special dishes include beet hummus, tuna niçoise and cherry macaroons. 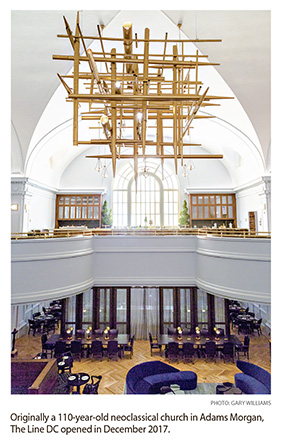 Originally a 110-year-old neoclassical church in Adams Morgan, this architecturally striking 220-room hotel opened in December 2017 with an internet radio station called Full Service Radio broadcasting from the lobby. New during its first spring in Washington is the opening of Spoken English, a Tachinomiya-style restaurant at which diners stand while they eat and drink. Featured dishes include hand-cut udon, tea-lacquered Peking duck and tempura.

To mark cherry blossom season, local D.C. artist and activist Robin Bell has created a series of projections titled “Peak Bloom” that will be on display between 8 p.m. and 10 p.m. This is the second time the property has partnered with the multimedia artist — the first being a series of projections on the hotel’s façade to celebrate Gay Pride last year.

The display complements a Cherry Blossom Package (starting at $219 a night until April 15) that features a cherry blossom cake by James Beard-recognized pastry chef Pichet Ong upon arrival, as well as two cherry blossom-inspired cocktails at the hotel lobby bar and restaurant, Brothers and Sisters, helmed by Erik Bruner-Yang. The drink, Peak Bloom, was created by mixologist Todd Thrasher and is made with gin, cherry herring, cold-pressed cherry juice and lime. 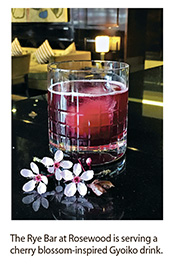 Perched on the C&O Canal in Georgetown, this hotel is going all out for the National Cherry Blossom Festival. Through April 20, guests who stay at least two nights can get the Cherry Blossom Package ($680 a night), which includes welcome cocktails from the Rye Bar, a Segway tour around the iconic Tidal Basin, daily breakfast for two at the Grill Room, a bike excursion with a catered lunch and a custom picture frame.

The Grill Room will serve blossom-inspired dishes such as red sea bream sashimi with cucumber, sakura and cherry ponzu, as well as Japanese cheesecake with cherry blossom tea ice cream. The Rye Bar’s Gyoiko drink is made with rye, cherry syrup, Benedictine and lime juice, garnished with an edible cherry blossom flower.

Chefs from the Ritz-Carlton’s Osaka and Tokyo locations teamed with the chefs here to celebrate the cherry blossom season. Available dishes include clear Japanese sakura soup made with a crispy rockfish filet in a cherry blossom broth and wagyu beef striploin with pan-fried bamboo shoots and brussels sprouts. The icing on the cake, so to speak, is a chocolate bonsai tree dessert ($42) that serves two to four people. It includes sesame shortbread, cherry blossom panna cotta, fresh raspberries, espresso marshmallow, bittersweet ganache, 24-karat espresso beans and mango passionfruit truffle.