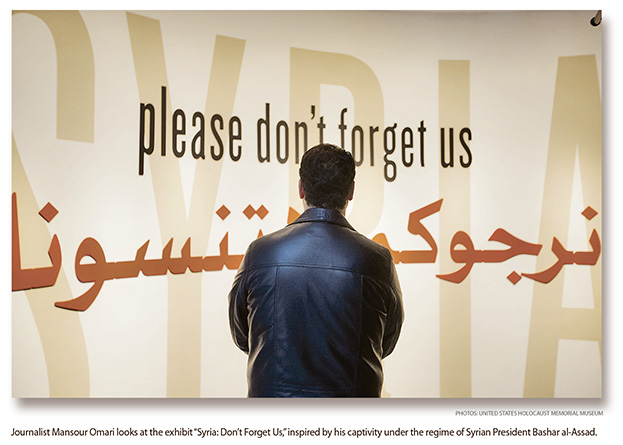 Five scraps of cloth with names written in ink made from blood and rust are the striking focal point of a somber, poignant exhibition on the Syrian conflict at the United States Holocaust Memorial Museum.

These artifacts serve as powerful evidence to highlight the impact on millions of Syrians who have suffered from the tragedy of seven years of brutal violence. Cameron Hudson, director of the museum’s Simon-Skjodt Center for the Prevention of Genocide, said a goal of the museum has been to highlight the atrocities committed by the Bashar al-Assad regime, and the story of Mansour Omari provided a way to delve into one man’s journey to help elucidate the crisis to visitors.

“What we’ve tried to do is tell the story of what’s happening in Syria through one individual,” Hudson told The Washington Diplomat of the exhibition, “Syria: Please Don’t Forget Us” — a reference to what Omari’s fellow prisoners whispered to him when he was finally set free.

Omari had been a journalist in the early days of the revolution when he was picked up by military police, detained and held in an underground Syrian prison and torture facility. With chicken bone as a quill, Nabil Shurbaji, a fellow Syrian journalist, wrote the names of the 82 prisoners incarcerated in the small cell. A tailor then inserted the pieces into the cuffs and collars of a shirt, and a pact was made: Whoever was the first to be released would wear it out and tell the families and the world of those still detained.

Omari’s was the first name called, and he shares the story of his incarceration and the creation of the cloths in a powerful video at the start of the exhibition. Tragically, Shurbaji died in prison. Of the 82 names on his list, Omari has only been able to track down what happened to about a dozen of the men. 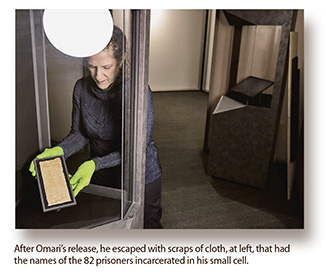 The simplicity and starkness of the exhibition is what makes it so effective. For all the destruction tied to the Syrian conflict, people’s stories — and the artifacts of their experiences — endure beyond the headlines that have numbed the world to the ongoing tragedies in the war-torn nation.

Omari’s story offers personal insights into the conditions that some 100,000 detained Syrians — many of whom have disappeared without a trace — suffered through, including beatings, starvation and cells so small that men had to take shifts to sleep.

The exhibition ties in with the museum’s mission to apply the lessons of the Holocaust to contemporary settings, Hudson said.

“For the past seven years, we’ve been keenly interested in the situation in Syria, trying to understand what could have been done to prevent these crimes, and now that these crimes are at the level they’re at, asking the question and trying to prompt policymakers to think about what we can do to end the atrocities and mitigate the atrocities on civilians,” Hudson said. “Because we’ve really seen in this conflict in particular it’s really the civilian population that’s being explicitly targeted by the Assad regime.”

As the museum does with its permanent exhibition on the Holocaust, this display focuses not on scale, but on individuals. “The numbers are just so big that the typical visitor, the typical person, would say, ‘Well, how do I impact that situation? It’s sort of hopeless,’” Hudson said. “This is a way to go past all the numbers and really go into one man’s story.”

“Syria: Please Don’t Forget Us” begins across the hallway from the end of the permanent exhibition on the Holocaust. “You walk out of 1945, you walk out of a world in ruins that is seeking justice for the crimes of the Holocaust, and you walk down the hall and here you are encountering the world we live in today. You want people to ask the questions of, ‘How is the world different today than it was then? How are these crimes different today than they were then? What are my responsibilities today versus then?’” Hudson noted. 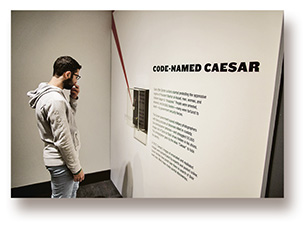 People who ask the questions of what they might have done had they lived during World War II can ask the same things of themselves in the Syria exhibit, he pointed out. “The idea is many of these crimes are going on today — in a different way, a different context, a different capacity. But it’s really about just trying to talk to people about what are their responsibilities in the world that we live in today,” he said.

And the museum has already had key officials come to grapple with those questions. Earlier this year, a delegation of the permanent representatives of the United Nations Security Council, led by U.S. Ambassador to the U.N. Nikki Haley and National Security Advisor H.R. McMaster, toured the exhibition.

“An exhibit like this is a way of keeping it both in the public consciousness, but also in the consciousness of policymakers who might say the conflict is too far gone for us to impact it now. The point here is that these are all individuals, human beings, behind the conflict that’s going on today,” Hudson said. “Whether or not we’ve forgotten about them or we’re prioritizing a response, there are huge communities of people in Syria that are looking to us, to the outside world, to respond in some way. This needs to be, and our hope is, that this keeps the issue as a very live policy conversation.”

Mackenzie Weinger is a contributing writer for The Washington Diplomat.