Home The Washington Diplomat September 2012 Thanks to Scholarship, Saudi Students Return to U.S. in Droves 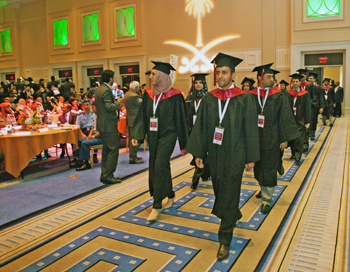 In October: The Diplomat Education section will focus on China, home to the largest group of foreign students making an impact on U.S. universities and colleges.

After living in the United States for six years, Hani Aljuaid has developed a taste for American coffee.

“Every morning, I go to Starbucks. It’s a habit I picked up” while studying at Nova Southeastern University in Fort Lauderdale, Fla., said the 25-year-old from Jeddah, Saudi Arabia. “But at night, I have to have Arabic coffee.”

Along with a newfound penchant for caffeine, Aljuaid recently completed a bachelor’s degree in computer science and mathematics, one of nearly 68,000 Saudis studying this year at more than 1,200 universities and colleges across the United States as a participant in the King Abdullah Scholarship Program (KASP).

Photo: www.PhotographyByAlexander.com /
Cultural Mission of the Embassy of Saudi Arabia

At an estimated cost to the Saudi government of nearly $5 billion since its inception in 2005, the program provides Saudi nationals who are pursuing their bachelor’s, master’s or doctorate degrees, as well as medical residencies and fellowships, with full tuition, a monthly stipend for living expenses, full medical and dental insurance, and an annual round-trip ticket back to Saudi Arabia. In addition, there are financial incentives for maintaining a high grade point average and dependants of accepted students can also receive the benefits of health insurance and tuition coverage.

The majority of the nearly 130,000 KASP recipients are studying in the United States; however, there are currently Saudi students at more than 30 universities around the globe, namely in the United Kingdom, Canada, Western Europe, India, Australia and Japan.

With this tremendous investment in the education of these students, it is not surprising that much is expected of them as well.

The objective of the scholarship program “is all encompassing: educationally, economically, politically and socially,” said Dr. Mody Alkhalaf, director of cultural and social affairs at the Cultural Mission of the Embassy of Saudi Arabia based in Northern Virginia.

Each student is assigned an academic advisor through the Cultural Mission and they must provide the advisor with a class schedule as well as copies of their transcripts.

While there is no formal contract that must be signed between the students and the government, it is more of a “gentleman’s agreement,” said Alkhalaf, that when they are finished with their studies, students will return to Saudi Arabia and help the country progress and develop into the 21st century.

The aim of the scholarship program is to create an educated middle class that can sustain the kingdom beyond its vast but gradually declining oil reserves. (Another unspoken goal is that the Western influence may help tame religious extremism back home.)

Not surprising, the areas of study that are most encouraged by KASP are in the fields of engineering, medicine or business. But Alkhalaf said there is increasing flexibility in this.

“The only thing we say they can’t do is take Arabic 101 as an elective,” she said. It is also not uncommon for students to apply to the program again so that they can pursue an additional degree or continue their educational training.

Aljuaid recently relocated to Washington, D.C., to continue his studies at the George Washington University, where he will begin a master’s degree in finance.

“My whole journey in the U.S. has been wonderful,” he said. “I had a golden opportunity with this scholarship, a once-in-a-lifetime chance to pursue my education. And it is better to have two degrees than one before going home.”

Yet the expectations of the students go beyond just academics and acquiring book knowledge. Alkhalaf tells incoming KASP students that “you’re here to learn not just facts and figures but also other cultures and take back things [to Saudi Arabia] that are positive.” 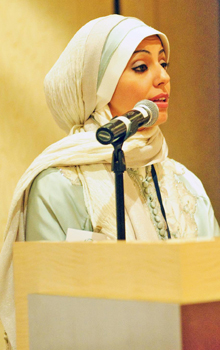 Photo: Cultural Mission of the Embassy
of Saudi Arabia

Dr. Mody Alkhalaf, director of cultural and social affairs at the Cultural Mission of the Embassy of Saudi Arabia, speaks at a graduation ceremony in Virginia in 2010. The objective of the King Abdullah Scholarship Program, she says, “is all encompassing: educationally, economically, politically and socially.”

For his part, King Abdullah has expressed his hope that the Saudi students will also serve as “ambassadors” for the kingdom — “for them to know the world and for the world to know them,” Alkhalaf said.

To that end, the students are encouraged to become involved on campus and within the communities where they are living to promote cultural outreach, forming Saudi student clubs, for instance, and holding regular events. Presently, there are more than 200 registered clubs around the country, Alkhalaf noted.

During his time at Nova Southeastern, Aljuaid started and served as the president of his university’s Saudi student club, which he said held events for Ramadan and Saudi National Day, in addition to hosting fundraisers for disaster relief in Haiti and a blood drive at a local hospital.

“Conducting these events and showcasing all the beautiful things about our culture and our country really gives you this ambassadorial feeling,” said Aljuaid. “Being exposed to many cultures and different types of people is a really important part of your life as a student.”

With Saudi students spread across the United States and in nearly every state, Alkhalaf acknowledged that sometimes students have complained about racism, but she is quick to add that sometimes “the Americans complain that the students aren’t paying their rent.”

“But more often than not,” she said, “it’s positive relations that are being built.”

Students from Saudi Arabia have been coming to the United States to study for decades, increasing rapidly in the late 1970s and peaking in the early ’80s, according to the Institute of International Education (IIE). The number dropped significantly in the years after the Sept. 11, 2001, attacks to only 1,000 Saudi students in 2004, when greater restrictions were placed on visa applicants after it was discovered that 15 of the 19 hijackers were from Saudi Arabia.

In 2005, however, after an agreement to ease these restrictions was brokered between King Abdullah and President George W. Bush, universities from California to Alabama began to see a sharp rise in Saudi students applying to academic programs on their campuses. According to the IIE, today, Saudi Arabia ranks sixth in the number of students that it sends to the United States — behind only China, India, South Korea, Canada and Taiwan. (More than 720,000 foreign students enrolled in the United States during the 2010-11 school year, up 32 percent from a decade ago.)

While the notion of allowing more Saudi nationals into the United States has raised alarm bells for some U.S. policymakers wary of the possibility that these students might import terrorism, others say the experience could lead to greater moderation in a country where religious conservatives maintain a powerful grip over the education system.

“If anybody is going to modernize [Saudi] society, it’s going to be people” exposed to the West, Elliott Abrams, a conservative analyst with the Council on Foreign Relations, told Ellen Knickmeyer of the Wall Street Journal. “In that sense, I’m all in favor of it.”

Unlike decades ago, the students are not just coming from the wealthy classes, but across all economic sectors in Saudi Arabia. The scholarship program has also been a golden opportunity for many Saudi women, who live in one of the world’s most gender-restricted societies, to get a Western education.

Nearly 30 percent of KASP recipients this year are female, said Alkhalaf. And the majority of these women are pursuing advanced degrees. 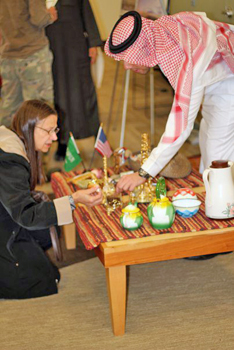 Photo: Cultural Mission of the Embassy
of Saudi Arabia

Saudis studying in the United States under the King Abdullah Scholarship Program are encouraged to become involved on campus and within the communities where they live to promote cultural outreach, forming Saudi student clubs and holding regular events.

It is a trend that Fanta Aw, the assistant vice president of campus life and director of international student and scholar services at American University in D.C., has been observing on her campus.

American University has always had students from Saudi Arabia, said Aw, but since the KASP began in 2005, that number has noticeably increased. With the exception of one or two students, she said that all of the 62 Saudi students enrolled at the university this fall are recipients of the scholarship and a third of those students are female.

“That is significant. It’s very telling about where the society is at and the role of women in 2012, both the importance of women in the Middle East and education,” said Aw.

For 25-year-old KASP recipient Zahra Alwazir, “this is the time to go in. Not that many women my age are working [in Saudi Arabia]. I’ll be able to climb the [professional] ladder a lot faster.”

Another noticeable change that Aw has witnessed in her 20 years on campus is the diversity in the areas of study for the Saudi students. In addition to the traditional fields of engineering, business and medicine, the students are enrolling in programs like law and government, public communication, psychology and education, she said.

To help prepare the students for the academic, social and cultural transitions that they will experience on campus, her office holds an orientation before the semester begins. While the university has the infrastructure in place to support many of the religious needs of the Saudi students, Aw also emphasizes the importance of a shared community and “peer-to-peer support.”

“Knowing that someone understands you is a very important piece for a successful transition,” she said.

For Alwazir, who recently finished her master’s degree in finance at American University after completing a bachelor’s degree at the university in May 2011, a shared cultural community was an important part of her experience on campus.

“At American, there are so many different cultures and I took advantage of this,” she said, noting that, however, her closest friends still hailed from the Middle East.

Alwazir plans to return to Dhahran, on the eastern coast of Saudi Arabia, later this fall and hopes to begin her professional life in business consulting.

“I’m looking forward to starting my career. I see it as an opportunity to go back,” she said. “They need us, our opinions, in the workforce to help develop the country and bring back our skills. I’m so excited for it and I’m so ready.”