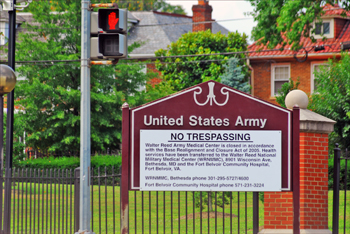 Pity the foreign government official tasked with finding usable space for an embassy in Washington, D.C. With a virtually recession-proof real estate market and office space costing $94 per square foot (second only to Midtown Manhattan in the United States), what offerings are available are bound to be expensive.

Add the usual concerns of security and diplomatic reciprocity, and it quickly becomes evident that land for new embassies isn’t simply found by perusing the classifieds section of the local newspapers.

The U.S. government is hoping to make the process easier, though, at least for a few countries. The State Department has recently outlined plans for the Foreign Missions Center, a 43.5-acre embassy campus that will be located on a former military base in Northwest Washington. By setting aside the land and offering it to select countries on favorable terms — especially considering Washington’s notoriously pricey real estate — the State Department hopes to make it easier for foreign governments to maintain a presence in Washington while also allowing Washington to better negotiate favorable terms for new U.S. embassies abroad.

Located between Georgia Avenue and 16th Street in Northwest Washington, near the District’s border with Silver Spring, Md., the Walter Reed Army Medical Center served as the U.S. Army’s flagship medical care facility for more than a century. In 2011, though, the closure and consolidation of military bases across the United States left the 113-acre campus empty, its purpose and personnel moved only a few miles north to Bethesda.

The State Department recently outlined plans for a new 43.5-acre embassy campus known as the Foreign Missions Center that will be housed on the former Walter Reed army base, located between Georgia Avenue and 16th Street in Northwest Washington.

With available land becoming more and more scarce in D.C., the State Department jumped at the opportunity to appropriate the western portion of the center’s campus for use as the Foreign Missions Center (the remaining 70 acres go to the city for local development). If all goes to plan, over the next five years the State Department hopes that more than 20 embassies will move into new digs on the campus, offering them reduced rates on rent and the ease of being on a single, secure plot of land.

The Foreign Missions Center won’t be the first embassy enclave of its kind in Washington. In 1968, Congress created the International Chancery Center, a 47-acre site in the Van Ness neighborhood of Northwest Washington that now houses 17 chanceries, including Austria, Bahrain, Bangladesh, Egypt, Israel and Nigeria. (The center was formally inaugurated in 1972.) The most recent addition to the center was China’s I.M. Pei-designed chancery, which opened in 2008.

The legislation that created the center charged the State Department with finding another site for a second campus. According to Cliff Seagroves, director of the Office of Diplomatic Property, Taxes, Services and Benefits in the State Department’s Office of Foreign Missions, a number of new sites were considered over the intervening 40 years.

They included the Old Soldiers’ Home, the St. Elizabeths Hospital campus, the site that currently houses RFK Memorial Stadium, and the Columbia Hospital for Women near the State Department’s Foggy Bottom headquarters. Ultimately, though, the Walter Reed site was chosen as being most appropriate for a second embassy enclave.

According to Jane Loeffler, an architectural historian and author of “The Architecture of Diplomacy: Building America’s Embassies,” such campuses are standard practice in cities across the world, from Beijing to Brasilia. “There are enclaves. There’s historically been embassy centers in many cities,” she said.

The benefits of the campuses are undeniable. First, they spare foreign governments from having to compete for office space in Washington’s pricey and incredibly crowded real estate market.

“There were a lot of small countries that couldn’t afford to buy into D.C. real estate,” said Loeffler about the original International Chancery Center. “They couldn’t get anything decent, and they needed office space. This was a way to accommodate the demand in a very expensive real estate market.”

That demand only increased over the last decade, according to the State Department, with more and more new countries requiring land in what is one of the smallest capital cities in the world.

“Just as a large number of new countries were created in the years following World War II, the collapse in the 1990s of both the Soviet Union and Yugoslavia resulted in the creation of 21 new countries, all of which quickly moved to establish diplomatic missions in Washington, D.C.,” says a State Department fact sheet.

But even more important, said Seagroves, is the very principle that drives diplomacy: reciprocity.

“When the State Department has land that it controls in Washington to effectively trade with other countries for lands our chancery needs abroad, it improves our ability — in some cases where you have challenges getting land — to move those issues forward and move on to the next stage of building new, safe and secure facilities for our personnel and operations in countries abroad,” he said.

Those considerations, he added, will help determine which countries get the coveted former Walter Reed space — and which ones might not. “We expect to use this asset wisely. It’s a limited resource [and we] want to make sure that any assignments are well thought out and in the mutual best interest of the U.S. government as well as the government that would be receiving the land.”

In some cases, he noted, that reciprocity would extend as far as the particulars of lease agreements that a foreign country receives. According to Loeffler, the deals can be quite good. Countries that secured spots at the International Chancery Center were able to sign 99-year leases for a fraction of the cost of renting or buying in Washington.

Seagroves says that while the process of preparing the land at Walter Reed for use has only just begun, he hopes to see countries starting construction by 2015. And while he said that he’s not yet sure how many plots will be available, 25 countries have expressed interest in the land, and the State Department had led 10, if not more, tours of the site.

So which countries are interested in setting up shop on the new campus? The perennially reticent State Department would not discuss the details, and Seagroves cautioned that any decision on who can build on the site is still a ways off.

“We haven’t gotten into serious discussions yet with countries that have expressed interest so far in possibly relocating or locating their operations at the center, nor have we been able to have a lot of serious discussions internally because we have to get through these initial stages first,” he explained. 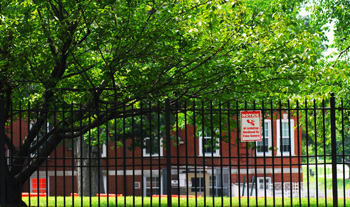 The western portion of the now-abandoned Walter Reed Army Medical Center will possibly house some 20 embassies in the near future, while the rest of the site will go to the city for local redevelopment.

It’s not only foreign governments that will be pleased with the new enclave. While the Foreign Missions Center will take up a portion of the Walter Reed site, the remaining 70 acres have been turned over to the D.C. government for redevelopment. And for a city that has long complained that much of its land — occupied by embassies, churches, hospitals and the federal government — is un-taxable, the opportunity to develop a prime chunk of real estate along Georgia Avenue has elicited praise and excitement from city officials.

A mixed-use community is being planned that could include an anchor retailer, residences and commercial space, according to Jose Sousa, the spokesman for the Office of the D.C. Deputy Mayor for Planning and Economic Development. City officials estimate they could gain $20 million in annual tax revenues from their portion of the Walter Reed site.

The plans aren’t without criticism, though. The process to develop the site could take a decade or more and is sure to be filled with bureaucratic wrangling among residents, businesses and city officials on the best way to revitalize the downtrodden stretch of Georgia Avenue. In the meantime, area businesses fear an economic vacuum.

On the embassy side of the equation, much like the International Chancery Center before it, some have said that the Walter Reed site is too far removed from downtown Washington to be convenient. (There is no Metro access to the site, unlike the center at Van Ness.) Additionally, the creation of these enclaves shuts off chanceries from the general public — a similar complaint that has been made about new, fortress-like U.S. embassies abroad.

Loeffler understands those concerns and wonders what it might say about some of the countries that choose to move to the new Walter Reed enclave. Still, she adds, many visitors to Washington rarely know that they could be standing next to a chancery to begin with, so the change won’t likely be widely noticed.

As for city officials, the change could be an economic boon. For foreign governments, it could mean a brand new home for their embassies at a bargain cost. And for the State Department, it could help secure new sites for America’s own missions abroad — all in all, not a bad deal for everyone involved.