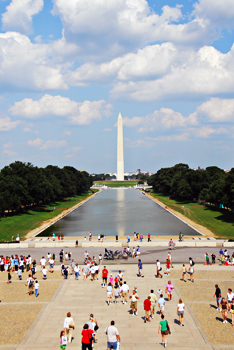 If political ambitions in D.C. run high, the buildings do not. The city’s iconic skyline is dotted with historic monuments and plenty of blue sky — thanks to strict height restrictions that have kept the city from building up. But with little room left to build out, critics say residents and businesses are getting shortchanged by the dearth of tall buildings in the U.S. capital.

So officials and ordinary citizens in Washington are once again mulling whether a law passed in the 19th century and amended in 1910 that limits the height of most city buildings to 130 feet (40 meters) should be relaxed. (Buildings along a 15-block stretch of Pennsylvania Avenue can reach 160 feet.)

On one side of the argument, opponents of the law say it’s outdated, keeps rents artificially high and stymies development. On the other side, supporters of the law say it has given Washington its unique character and sweeping vistas unobstructed by skyscrapers. In what other city can you watch fireworks, a few miles away, from the roof of your apartment building and actually see most of the sparkle?

Earlier this spring, D.C. Mayor Vincent Gray, D.C. Delegate Eleanor Holmes Norton and Rep. Darrell Issa (R-Calif.), who chairs the House Oversight and Government Reform Committee, which has jurisdiction over Washington, floated the idea of slightly raising the city’s height limits. The move would possibly add a story onto some buildings or convert non-inhabitable rooms on top floors into livable space. Though the changes would be relatively minor, unlike in other city jurisdictions, they require the approval of Capitol Hill — a tall order in today’s politically paralyzed Congress — and they are sharply opposed by preservation groups.

Laura Richards, a trustee of the 90-year-old Committee of 100 on the Federal City, which is “dedicated to safeguarding and advancing Washington’s historic distinction, natural beauty and overall livability,” told a July congressional hearing on the issue that doing away with building height limits would “alter irretrievably the District’s historic, welcoming scale.” She called for the 1910 Height Act to remain “undisturbed and be enforced vigorously.”

And the National Park Service, which manages Washington’s centerpiece, the National Mall, and many of its monuments, also has words of praise for the height restrictions, saying on its website that the “limit of 160 feet has preserved the broad, horizontal Baroque nature of the city, allowing light and air to reach the pedestrian level, and resulting in a picturesque skyline pierced by steeples, domes, towers and monuments.”

But others argue that the restrictions have promoted suburban sprawl, pushing people who work in D.C. out to the suburbs to live. That, in turn, has led to overcrowding on the Metro and huge traffic jams. In 2006, then Washington Post staff writer Michael Grunwald wrote that the Height Act has “inflated office rents, deflated the municipal tax base, limited affordable housing, contributed to the region’s hideous traffic jams and generally helped keep Washington a second-tier city despite the unrelenting growth of its major industry — the government.”

Today, office rent in the District remains among the highest in the United States (second only to Manhattan, in fact), a financial burden some say keeps businesses away — or makes current ones less profitable.

D.C. Chief Financial Officer Natwar Gandhi said at the congressional hearing in July that relaxing the height restrictions in the capital would help to increase tax revenues, allow population growth and bring in business.

Contrary to popular opinion, the height restrictions were not enacted to keep buildings lower than the Capitol building or U.S. Monument. Congress passed the original Heights of Buildings Act in 1899 in response to the construction of the Cairo Hotel, which rose more than 160 feet and sparked public outrage for towering over other city landmarks. 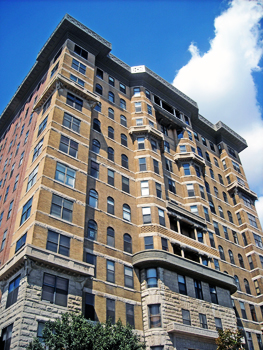 When it was built at the end of the 19th century, the 14-story Cairo Hotel in D.C. sparked such outrage over its height that the city enacted strict height limits on all of its buildings — restrictions that still stand today.

The height restrictions stemming from the Cairo backlash, which remain on the books despite various efforts over the years to change them, are a complicated formula based on the width of the street that a building sits on, and the building’s intended usage. Christopher Collins, counsel to the District of Columbia Building Industry Association, summarized the law at the July congressional hearing:

“Buildings on ‘business streets’ … may be erected to a height equal to the width of the adjacent street plus 20 feet, with an overall maximum height of 130 feet, except for the north side of Pennsylvania Avenue between 1st and 15th Streets, NW, where a height of 160 feet is permitted. On residence streets, the maximum height is 90 feet but is further limited by the width of the adjacent street minus 10 feet.”

D.C. Delegate Holmes Norton said she isn’t sure how or why anyone came up with that formula and argues that D.C. residents should have a say in whether the restrictions are relaxed.

Collins said his association, which represents some 500 commercial and residential real estate groups, proposes modifying the law to remove the restriction on “human occupancy” above the top story of a building, allowing top floors to be used as restaurants, for instance, health clubs, community rooms, green gardens or living areas.

“We believe that this proposal will have a positive benefit on the quality of life of those using those facilities and will also help to enhance the beauty of the skyline of our ‘horizontal city,'” he said.

Washington might want to consider taking a leaf out of the books of other world capitals that have seen their landscape altered over the past half century.

The Polish capital of Warsaw was an architectural jewel, much like Washington, before World War II, with low-rise buildings, wide boulevards, expanses of green and a river running through it. The city was almost entirely flattened during the war and while the historic old town was meticulously rebuilt, most of the reconstruction afterward produced the faceless concrete buildings favored by the Soviet communist regimes of the time.

The builders had their reasons, including expediency — the need to house lots of people quickly — money and dictates from the Soviet occupying power.

To add insult to what many residents openly called an ugly city with just a few beauty marks, Joseph Stalin had one of the few neighborhoods in downtown Warsaw that survived the war razed to make way for the 42-story, 768-foot-tall Palace of Culture. It’s one of five skyscrapers that the Soviet leader had built, allegedly because he was jealous of the Empire State Building. Poles were not fond of it and almost tore it down in 1989 when the Berlin Wall crumbled.

But today, the palace still stands and has become an accepted landmark of the city sightline, which is also dotted with gleaming skyscrapers, newly constructed buildings featuring historic charm, and the remnants of those faceless Soviet-era tenements. The result is a hodgepodge of architecture but also a city that has clearly adapted to the times — something critics say Washington, with its squat, boxy look, has failed to do. 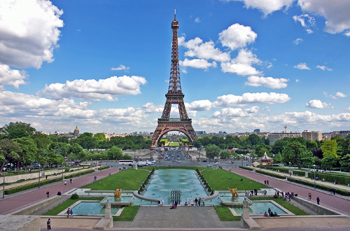 The Eiffel Tower, which beat out the Washington Monument to become the world’s tallest man-made structure after its construction for the 1889 World’s Fair, remains the tallest structure in Paris today.

Then again, perhaps Washington prefers the model of the French capital that inspired so much of its own character. Paris was largely spared the devastation of World War II and is considered to be one of the most beautiful cities in the world, thanks largely to Baron Georges-Eugène Haussmann, who modernized the city in the mid-1800s. Haussmann’s name has been given to one of Paris’s main shopping thoroughfares and to the architectural style of the buildings that line the city’s streets. He is also credited with introducing the long, grand avenues in the French capital that frame Parisian treasures like the Arc de Triomphe.

If that sounds familiar to Washingtonians, it’s because the U.S. capital was also designed around “grand avenues” with sweeping vistas by Frenchman Pierre L’Enfant. His vision was complemented 100 years later by the addition of the National Mall and many of the city’s monuments.

Paris has another thing in common with D.C. The Eiffel Tower beat out the Washington Monument to become the world’s tallest man-made structure after its construction for the 1889 World’s Fair.

Today, the iconic tower remains the tallest structure in Paris. The second tallest, the Tour Montparnasse, was completed in the 1970s and rises 689 feet above a train station. The Tour Montparnasse is an office building that Parisians were initially in favor of, seeing it as a symbol of modernity. But once it was built, they looked at it as an intrusion on the skyline.

Most high-rise buildings in Paris are now erected on the outskirts of the city, primarily in a business district called La Défense.

However, unlike the Washington Monument, which stands at 555 feet, the Eiffel Tower rises more than 1,000 feet, roughly the height of an 81-story building. It’s exactly the kind of building that would be heresy in Washington, D.C., whose growth, depending on one’s perspective, has either been stunted by an arcane law or saved by it.