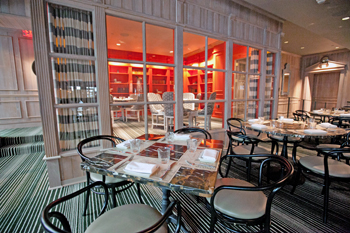 The Federalist, an extension of the renovated Madison hotel, pays homage to the hotel’s historic character by incorporating elements of 18th-century American cuisine.

When the iconic Madison hotel was purchased last year by Atlanta-based real estate investment firm Jamestown Properties, the new owners set out to restore the property to its former glory as the hotel of choice for statesman, politicians and celebrities alike. The plan included a complete makeover of the interior and a new restaurant that would link the hotel to its historical referents.

It was the latest reincarnation of a hotel that seemed to be experiencing an identity crisis of sorts — the type that periodically afflicts many of the city’s historic properties as they find themselves tugged by the desire to preserve their traditional appeal on the one hand, while keeping up with the changing times on the other.

In particular, the Madison, opened in 1963, has sometimes struggled to balance its historic character with its modern leanings (most evident in the building’s contemporary façade), but a $20 million renovation seems to have struck the right blend of old and new.

For the new look, noted New York interior designer Dominick Coyne melded the hotel’s 1960s modernist architecture and design with an 18th-century sensibility reflected in the pastoral scenes in the paper wall coverings. He relied on understated shades of gray, brown and taupe in his color palette, as well as octagonal shapes in many of the interior accents — as seen in the clean elegance of the new lobby.

Coyne also redesigned the restaurant alongside the hotel — previously occupied by Palette, a sleek dining space that didn’t always mesh with the centuries-old James and Dolley Madison-inspired style of the hotel.

So Coyne resurrected the name of an earlier incarnation of the restaurant, the Federalist, in a nod to the fourth U.S. president’s important role in the ratification of the Constitution, and introduced a concept intended to mirror the hotel’s marriage of contemporary themes with its historical roots.

At the Federalist, chef Harper McClure brings together local foods with the culinary traditions of the 18th century to create a contemporary re-envisioning of early American cuisine.

Chef McClure brings to the project unique qualifications. After graduating from the Culinary Institute of America at Hyde Park, New York, McClure spent six months at the Cobblestone Valley Farm learning about heirloom produce and source-verified meat and developing a passion for using local, seasonally appropriate ingredients in his work. With this solid beginning, McClure went on to stints as executive sous chef at Bacchanalia in Atlanta, the southern-inspired Vidalia and notable French restaurant Marcel’s, the latter two in Washington, D.C. 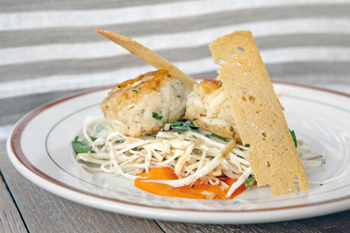 In crafting the Federalist menu, McClure focused on the Mid-Atlantic region, offering a balanced choice of the meats and fish that would have been available to cooks at public taverns several centuries ago. Among the seafood options, the crab, scallops, rockfish and cod all receive interesting treatments, though the interpretations seem more modern than historical.

The rockfish filet, prepared with perfectly crisped skin, is served atop a mound of jumbo lump crabmeat and risotto-like Carolina gold rice bathed in an elegant lobster-dominated shellfish essence. Three large scallops are pan seared with brown butter until they have an almost caramelized crust, and then served on top of small slices of thick braised bacon and a sweet puree of Hubbard squash. Small chunks of compressed apple and a garnish of frisee round out the dish. The sweetish squash puree is a subtle touch, and while the same ingredients were probably around 300 years ago, this particular combination feels decidedly up to date.

The charcuterie board in particular offers a broad selection of housemade items such as amazingly thin slices of cured duck, as well as bresaola, spicy sausage, pork lard, coarse pâté de campagne and smooth liver pâté with pork gel. These are laid out and dressed with perfectly maple-toasted pecans, tiny florets of pickled cauliflower and a quince jelly. While many of the items reflect a strong continental influence, the sum total very much evokes an elegant ploughman’s lunch.

Also honing to the traditional, the veal pot pie is a white stew medley of veal, root vegetables and pearl onion covered with a flaky puff pastry. It’s robust but not heavily spiced. Turtle soup also makes an appearance, with barley and a sherry-tomato broth that’s strongly evocative of times gone by, perhaps simply because it is so seldom served.

But as with the fish, several of the meat dishes feel distinctly contemporary, such as the Amish chicken roulade served with a black truffle mousse, baby carrots, potato puree and a Madeira jus. Others, such as the steaks, with their simpler preparations — grilled with a wild mushroom fricassee, potato sticks and an herb butter — seem more timeless.

The meat dishes at the Federalist differ from their forbearers in that they are less heavily seasoned. Where clove, mace, allspice and nutmeg are now associated mostly with sweet dishes, in the 18th century they were dominant flavorings in many savory meat dishes, for practical reasons. Prior to refrigeration, spices were an important way of covering up the taste and smell of meats that had begun to go bad, and these heavier spices were particularly effective. Spices are no longer necessary for this reason, but we still have an expectation that dishes should carry notes of this flavor, and some dishes at the Federalist fall short on the spice front. 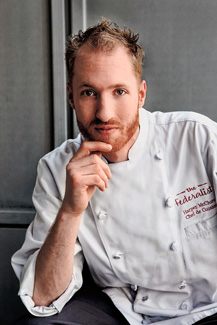 While some of the savory dishes may seem a bit bland, desserts do not suffer from any lack of flavor. The menu offers an intriguing combination of historic and contemporary choices. Rarely seen syllabub, a whipped concoction of wine and cream paired with caramelized bananas, offers a glimpse of simpler times. The lemon verbina panna cotta melts on the tongue with a floral citrus burst. Served with bits of honeyed amaranth bar, roasted pineapple and a peppery sweet lime-espelette granita, this dish is superb — deceptively light yet rich and refreshing.

In a nod to the historical importance of drinking chocolate, the Federalist features a very strong Valrhona hot chocolate. Rich and not too sweet, it shares the plate with a delightfully doughy fresh yeast doughnut and honey-sweet housemade marshmallows. For a fruity dessert, the blood orange bavarian is an excellent choice, with the semi-frozen bavarian cream served over a macaroon-like vanilla sponge cake and encircled by a passion fruit coulis and milk crumb.

The reconfigured space at the Federalist evokes the era it showcases, with nice touches such as gas lamps and vintage oak woods. And some of the challenges diners experienced when the restaurant first opened seem to have been worked out. The timing works well and food arrives at the table with no undue delays or pauses. The service is excellent — and there is a lot of it, so on occasion it can feel overly attentive. Servers do a good job explaining the menu, but it would be an added benefit if they could provide more information on the historical inspiration of the dishes and the chef’s take on them. It seems a pity to miss the opportunity to learn a bit about the historical underpinnings of American cuisine.

McClure’s talents are strongly in evidence at the Federalist. His visual presentation is outstanding. Each dish is thoughtfully developed and well executed without being overly staged. And many of his preparations are fascinating and unusual as well as delicious. But what seems to be lacking is clarity of vision in the restaurant’s concept.

Given the distribution system of food in the 18th century, local sourcing of ingredients is a logical step in resurrecting the era, but that alone does not create a link to the past. Some of the dishes depart so far from more traditional versions that it’s difficult to discern the connection or understand the context of the dish. So while the idea behind the Federalist is certainly appealing, its execution isn’t living up to the promise. It’s still in the early days though, and perhaps in the same way that some of the earlier glitches have been addressed to good effect, this too can change. Until then, you can expect a decent meal, but not necessarily one that transports you to a different place and time.