Also See: ‘The Two Faces of January’ and ‘Pride‘ and Repertory Notes

Kevin Kline, left, is surprised to find Maggie Smith living in the Parisian apartment he inherited from his father in Israel Horovitz’s “My Old Lady.”

Renowned American playwright Israel Horovitz (“Author! Author!” “The Indian Wants the Bronx”), who lives in both France and the United States, makes an assured transition behind the camera by directing the touching, bittersweet comedy-drama “My Old Lady.” Horovitz made a wise decision in sticking to material he knows best, cleverly adapting his own acclaimed play to the big screen, resulting in a highly polished screenplay.

The initial thing he did correctly was to pen a well-structured, witty script that is full of linguistic treasures for actors. He then succeeded in recruiting star players to bring his words to life on camera. The novice narrative film director coaxes vivacious performances out of his supremely talented cast, headlined by American movie star Kevin Kline (“The Ice Storm,” “A Fish Called Wanda”), British leading lady Kristin Scott Thomas (“The English Patient,” “Sarah’s Key”) and British living legend Dame Maggie Smith (television series “Downton Abbey,” “The Best Exotic Marigold Hotel”). The accomplished thespians have a field day chewing up the scenery with Horovitz’s juicy dialogue.

Middle-age American ne’er-do-well Mathias Gold (Kline) comes from New York to Paris after the death of his father, from whom he was long alienated, to claim his inheritance, a spacious apartment with a courtyard in a prime location. Anticipating that his windfall will turn his life around, Mathias is dismayed to discover that the apartment is classified under French law as a viager. In this French real estate deal, the previous owner, elderly Englishwoman Mathilde Girard (Smith), is entitled to live in the entire flat until her death. Not only that, Mathias’s father — and now Mathias — is legally obligated to pay Mathilde a monthly sum.

As Mathias is suddenly stranded without a place to stay, Mathilde offers to rent out a room in the unit to him, a peculiar arrangement for reasons yet to become clear. As he schemes of a way to take legal possession of and sell the property, he clashes with Mathilde and especially with her spirited, resistant daughter Chloé (Scott Thomas). Living all together under the same roof, they unexpectedly learn some surprising truths about each other — and themselves.

Credit goes to Horovitz for keeping ample doses of high energy flowing throughout the running time. Though the motion picture’s theatrical roots are obvious, the film manages to avoid seeming too terribly stagy, a common cardinal sin of plays turned into movies. And French cinematographer Michel Amathieu’s authentic footage photographed on the streets and interiors of Paris definitely provides a solid foundation for the mise-en-scène’s realism. 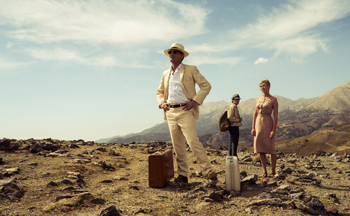 Viggo Mortensen stars as a con man stockbroker trekking through Europe in the classy thriller “The Two Faces of January.”

The classy thriller “The Two Faces of January” proves to be an impressive directorial debut feature for distinguished Iranian-British screenwriter Hossein Amini (“The Wings of the Dove,” “Drive”), 15 years in the making. His intelligent, layered script is adroitly based on the novel by best-selling American mystery author Patricia Highsmith, whose other books “The Talented Mr. Ripley” and “Strangers on a Train” were previously turned into memorable films as well.

Amini’s taut screenplay elegantly drives the plot’s twists and turns as well as the intense psychological character development worthy of a Greek tragedy: the mythical story of Athenian national hero Theseus, whose legendary feats including slaying the Minotaur, and his despondent father, King Aegeus. American actor Viggo Mortensen (“A History of Violence,” “The Lord of the Rings” trilogy), American movie star Kirsten Dunst (“Marie Antoinette”) and Guatemalan-Cuban-American rising star Oscar Isaac (“Inside Llewyn Davis”) are at the top of their acting game starring as the story’s troubled protagonists.

As “The Two Faces of January” opens, Chester (Mortensen) and Colette MacFarland (Dunst) — a rich, fashionable American husband with his much younger, beautiful wife — are taking a holiday at the Parthenon in Athens. Colette insists on hiring charismatic Rydal (Isaac), an American tour guide who speaks Greek, to show them around. Rydal tries to swindle his fellow Americans in an exchange at the market, but the small-time crook may be in over his head.

It turns out that Chester is a con man stockbroker whose appearance of refinement is a pretense; he is on the lam from the United States with stolen cash stuffed in his luggage. Fueled by Chester’s similar appearance to Rydal’s late father, Rydal ends up becoming friends with the tourist couple. The trio’s ties grow closer under duress after they leave a murder scene at the MacFarlands’ hotel, fleeing together on a journey that takes them across southeastern Europe.

The epic scope of “The Two Faces of January” is reminiscent, in an old-fashioned good way, of the earlier classic film adaptations of Highsmith’s works. Danish director of photography Marcel Zyskind, a frequent collaborator with versatile British filmmaker Michael Winterbottom, shoots gorgeous photography on postcard-perfect locations ranging from across Greece to Istanbul, Turkey. Maverick Spanish auteur Pedro Almodóvar’s regular composer Alberto Iglesias delivers a sweeping, but measured, score that propels the action along with purpose. 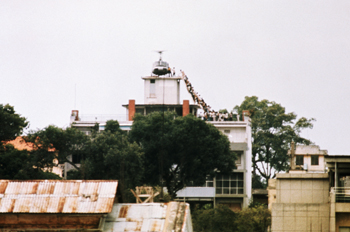 A CIA employee helps Vietnamese evacuees onto an Air America helicopter a half-mile from the U.S. Embassy during the Fall of Saigon in 1975, pictured in the documentary “Last Days in Vietnam.”

In 1999, rising British theater director Matthew Warchus made a disappointing film debut as a screenwriter-director with a failed adaptation of Sam Shepard’s play “Simpatico.” Fifteen years later, Warchus seems to be finally reviving his film career with “Pride,” a feel-good, historical comedy-drama. Winner of the Queer Palm at the 2014 Cannes Film Festival, the critically acclaimed crowd-pleaser is currently being rolled out in theatrical releases internationally.

Warchus can also look forward to the appearance of his anticipated film adaptation of his Broadway musical “Matilda.” In the last decade and a half, he has steadily built his theater career to dizzying heights, garnering major laurels.

In 1984, during Tory U.K. Prime Minister Margaret Thatcher’s tenure as “the Iron Lady,” the National Union of Mineworkers (NUM) went on strike against her government’s harsh free-market policy prescriptions, including the planned shuttering of scores of coalmines. Against the backdrop of the Gay Pride March in London, gay activist leader Mark (Schnetzer) and his deputy Mike (Gilgun) see parallels in the gay community’s struggle against Thatcher with that of NUM. After their offers of help are declined by NUM’s national leadership, they form LGSM (Lesbians and Gays Support the Miners) and go directly to support miners in the small village of Onllwyn, Wales. The two sides overcome their initial prejudices to find common cause.

The smart screenplay written by Stephen Beresford soundly structures the film’s stirring events. Warchus’s lively, assured direction keeps the action moving while maintaining a sense of verisimilitude. Admittedly, “Pride” is not the most original of films. The viewer probably knows what’s coming and what to expect. However, unlike many other Hollywood or British comedies based on real stories that are easy on audiences — and readily manipulate their feelings — the raw emotions of “Pride” always feel genuine, never saccharine. “Pride” is the real deal.

The IndieCapitol Awards Ceremony (Sun., Oct. 12, 1 p.m.) will be presented at the Angelika Film Center at Mosaic.