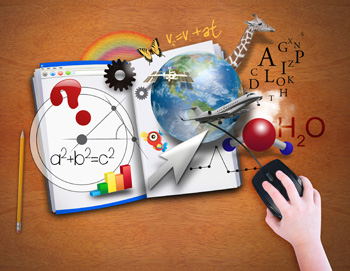 When it comes to the all-important STEM studies (science, technology, engineering and math), the statistics for American kids are sobering: The United States ranks 52nd in the quality of its mathematics and science education, according to the World Economic Forum.

Among the 34 nations in the Organization for Economic Cooperation and Development (OECD), the United States got below-average marks in mathematics test scores on a test given every three years to 15 year olds. American teens ranked just 27th on the tests, called the Programme for International Student Assessment (PISA). In science, the United States did a little better, but still not well. It ranked 20th out of 34 in the OECD-administered test, and unlike other countries that improved their scores from previous years, U.S. performance rates were flat.

And while more students are getting bachelor’s degrees from U.S. universities, fewer of those degrees are in the so-called STEM subjects. A report compiled by the U.S. Congress Joint Economic Committee (JEC) in April 2012 found that while 24 percent of bachelor’s degrees awarded in the United States in 1985 were in STEM disciplines, the share had fallen to 18 percent by 2009, even though the relevance of those fields has surged in recent years.

That same report says U.S. employers are frantically looking to fill STEM positions and often turn to foreign talent to do so because the United States simply is not churning out enough science, technology, engineering and mathematics degree-holders.

The source of the problem, says the JEC report, is how the United States prepares its kids for a STEM career.

“American students’ performance on international standardized tests suggests problems earlier in the STEM pipeline,” the report says. In fact, problems may be starting “as early as elementary school and continue through students’ secondary and post-secondary education.”

This is the point where Charlie Brown would heave a sigh in the “Peanuts” comic strip.

James Brown — no relation to Charlie — is not ready to throw in the towel on Americans’ success at STEM just yet.

Brown is the executive director of the STEM Education Coalition, an alliance of more than 500 educational, business and professional organizations that has been quietly working for the past 15 years to promote STEM education as a national priority in the United States.

Since the coalition was set up — ironically around the same time as the OECD was launching its PISA tests — Brown has noticed a change in the way schools and companies approach STEM education. 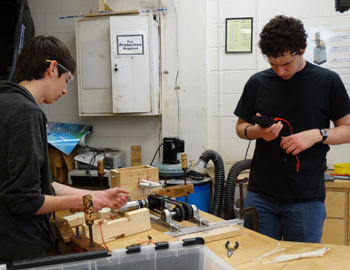 “An awful lot of groups have adopted the message that STEM education is important to the future of our country,” he told The Washington Diplomat. “Almost every school district has some component that deals with STEM education, and over the past 10 years, we’ve sensitized educators and parents to the importance of STEM.”

One local school that has reaped the benefits of STEM education is Wheaton High School in Silver Spring, Md. Once considered a public school to avoid at all costs, even if it meant lying about where you lived — one Wheaton alumnus said most of his 1980s graduating class ended up in jail — the school leapt from the depths of the U.S. News and World Report high school rankings to 16th place out of 244 high schools in the state of Maryland last year and 589th out of more than 19,400 nationwide.

It started to turn its ship around in 2004, when it introduced the first of its “academies” in bioscience, engineering and information technology. Then, in 2012, the school took an even bigger step when it welcomed its first intake of freshmen to application-only magnet programs in biomedical sciences and engineering. (The school also offers a liberal arts and humanities academy “because we recognize that not everyone has great passion for STEM,” Carias said.)

“Students are pushing themselves more to take advance-level classes and the inception of the application-based [magnet] program has brought to us a cohort of high-achieving students that are having a tremendous impact on the high school,” Carias said.

Currently, around three-quarters of students at Wheaton are enrolled in the school’s STEM academies or magnet programs, and more than half the student body is enrolled in courses developed by the Project Lead the Way (PLTW) nonprofit, the largest provider of STEM education programs in the United States.

Project Lead the Way launched in 1997 — the same year the OECD launched its PISA tests that the United States did so badly on last year. Three years later, PLTW expanded into middle schools and in 2013 launched a program for kindergarten through fifth grade, meaning it now covers STEM education all the way to children’s early school years. 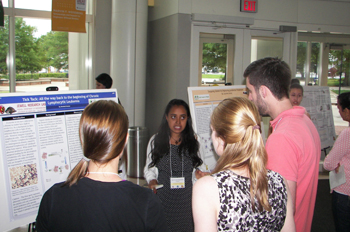 A Wheaton High School student presents her research to an audience of scientists at the University of Maryland.

Research shows that the best time to give kids the STEM bug is somewhere between third and fifth grade, Brown said. But companies that fund STEM education have not always recognized that.

“Fifteen or 20 years ago, most companies that were actively involved in STEM education were only involved in university-level programs,” Brown said. “But if you ask them today — the ExxonMobils, the Microsofts, the Intels, the really large companies that are making large investments in STEM education because their workforce depends on it — they are increasingly supporting programs at the elementary school and middle school level, even early childhood.”

Maybe when that change trickles down, the United States will start scoring better on the PISA tests.

Brown said that more schools should be following the lead of Wheaton and focusing on STEM education, because science, technology, engineering and math touch just about every job out there these days. And ultimately, the reason parents send their kids to school is so they can get a job that pays well one day.

“STEM skills are important not just to the Ph.D.-track university researcher, to the brainy kid who goes to a lot of science fairs and wants to be a rocket scientist, but also to the auto mechanic and the person who works in aircraft manufacturing and to your nurses and all sorts of people in the economy who we haven’t always thought of as STEM workers,” Brown said.

He cited today’s automobile mechanics as a classic example of the importance of teaching our children the right skills.

“A generation ago, an auto mechanic had no interface with electronics at all. He worked with his hands, with tools. He took your car apart and put it back together,” Brown said. “But now, the first thing an auto mechanic does is plug your car into a software system and to fix your car, he or she has to interface with the car’s computer. The best mechanics now get jobs for $70,000 to $90,000 a year and need a certain amount of math and science to even enter trade school.

“That’s how STEM education has changed,” Brown added. “It’s not just the best and brightest — every kid needs at least a level of literacy in the STEM subjects, not just the future rocket scientist.” 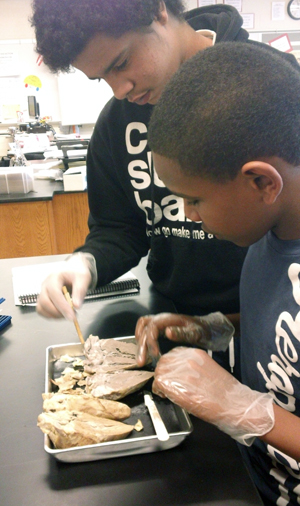 Asia-Pacific countries and regions dominated the most recent PISA rankings, released in December last year, taking the top seven places in math and six of the top 10 places in science literacy. Rounding out the top 10 in both rankings were European countries: Liechtenstein, Switzerland and Belgium made the math top 10, while Finland, Estonia, Germany and the Netherlands made the science top 10. The United States finished way out of the rankings’ upper echelons.

Different groups, including schools, have been trying to right the U.S. education ship for several years now. But it’s not that easy. Simply doing what the successful PISA countries and regions do is not the solution. For a start, it’s impossible to compare the massive U.S. education system to the system in, say, Estonia, the country that gave us Skype. Recently, Estonia started teaching simple computer programming languages to every child in pre-school. But how do you compare Estonia, with its population of 1.33 million, to the United States, a population of over 300 million?

Even though direct comparisons are not possible, the United States could take a page out of the books of other countries and regions (the top PISA scorer is the China-Shanghai region, which is why that designation keeps coming up). According to Brown, other countries have made “a high-level commitment to emphasize the math and science skills because that’s where they see their economies going.” He thinks the United States should do the same.

But there are obstacles to going to the head of the PISA class. One of them is the lack of qualified STEM teachers.

Not only is the pool of graduates in STEM subjects declining in the United States, but well-qualified graduates who would make great STEM teachers are often quickly snapped up by big STEM companies, which offer better salaries than American public schools can. So something has to be done to woo good teachers and then keep them.

Carias said Wheaton’s teaching staff has contributed to its success in climbing up the state and national rankings. Many teachers at Wheaton have been there for years and are “passionate about growing these STEM programs,” she told us.

“The notion of focusing on the STEM field requires a lot of thoughtful work by policymakers over time and a lot of changes in education laws,” Brown said. “We have policies for teacher recruitment, for accountability in schools and so on. Those all have to be re-crafted to make STEM subjects more of a priority.”

The best STEM high schools in the D.C. area, according to U.S. News and World Report, are:

1) Thomas Jefferson High School for Science and Technology in Alexandria, Va., topped the STEM list not only locally, but nationally as well. Open to students who reside with a parent or legal guardian in Arlington, Fairfax, Loudoun or Prince William counties in Virginia, the school boasts more than 10 specialized research labs, ranging from astrophysics to oceanography.

2) Poolesville High School in Poolesville, Md., offers science, math, computer science and ecology magnet programs. Magnet information night is scheduled for Oct. 6 at the school. Entrance is based on application (due Nov. 7) and successful completion of a magnet entrance exam for Montgomery County. The exam will be held on Sat., Dec. 6, with a snow date of Dec. 13.

3) Thomas S. Wootton High School in Rockville, Md., is in the heart of Montgomery County; students must live in catchment area to attend.

4) Richard Montgomery High School in Rockville, Md., not far from Wootton, was also an early adopter of the International Baccalaureate program; students must live in catchment area to attend.

6) Montgomery Blair High School in Silver Spring, Md., offers magnet programs on application and successful completion of entrance exam, as well as STEM academies. Applicants must live in Montgomery County. Magnet test date is the same as for Poolesville.

7) Wheaton High School in Silver Spring, Md., did not make it onto the U.S. News and World Report’s listing of the top 250 STEM schools in the country. But with the listing based on student scores on the math and science Advanced Placement (AP) tests, we reckon it could be on there soon. The magnet programs are based on application and students must live in the Downcounty Consortium catchment area.