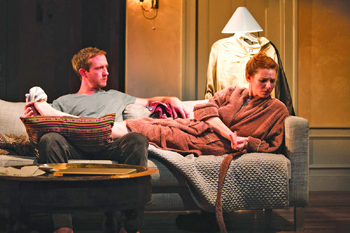 The awkward tension begins to simmer a couple of minutes into “Belleville,” Studio Theatre’s edgy production of Amy Herzog’s dark and twisted play about relationships, deception and dejection.

Jacob Knoll, left, and Gillian Williams portray a newly married couple whose Parisian life isn’t all it’s cracked up to be in “Belleville.”

In the play’s opening scene, Abby, newly married to Zack, an expat American working as a physician for Doctors Without Borders, enters their apartment in the trendy Parisian neighborhood of Belleville.

As Abby (Gillian Williams) unloads her bags and coat and removes her iPod earbuds she hears some unmistakably sexy sounds coming from the couple’s bedroom. Surprised that her husband isn’t at work, Abby barges into the room to find Zack (Jacob Knoll) alone — well, except for the company he’s keeping on the internet. Flustered, Zack professes his embarrassment but Abby seems to take it in stride and simply zings him with a funny little barbed joke.

The tense moment is among the lightest in a play that gradually delves into much darker terrain where everything is most definitely not what it seems.

The couple quickly allows the internet indiscretion to fade as they plan a date night in the City of Love. But as they banter, their comments start to reveal fractures in what seems, at least on paper, to be an idyllic domestic arrangement. Abby — portrayed by Williams with an irksome, almost uncomfortable energy — is ambivalent about her life in France, as evidenced by her professed disinterest in even attempting to learn the French language, as well as the fact that her acting career is going nowhere.

“To be an actor you have to love to suffer,” she proclaims. “I only like to suffer.” She’s also doing a middling job at teaching yoga. The reason Abby came home early to find Zack alone with his computer is that no one showed up for the class she was supposed to teach.

Meanwhile, Knoll’s squirrely, nervous Zack is a doctor researching ways to prevent unborn children from contracting AIDS from their mothers. He also likes to smoke pot, which he does first with his neighbor and landlord Alioune, and later with increasing frequency when he is alone or anytime he seems to get stressed, which is often. 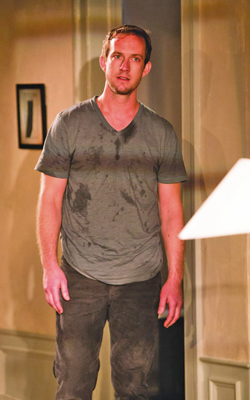 Alioune, played with a sincere charm by Maduka Steady, stops by to inquire about rent that is four months overdue, but because of his nice-guy tendencies he ends up smoking a bowl of weed with Zack. It does seem a bit odd that this doctor is four months overdue on his rent, doesn’t it? Herzog’s play, while featuring two grating main characters, shows an especially impressive ability to foreshadow problems and conflicts that lurk just beneath the surface of congeniality.

While Zack repeatedly self-medicates with marijuana, Abby is fresh off of her own anti-anxiety pills and it shows. She’s touchy, irritable and self-absorbed. But Williams is an attractive actress with a long, lithe physique that she constantly drapes and contorts over couches, beds and chairs in the course of delivering her dialogue. The overt physicality distracts a bit from the dialogue and adds to the character’s generally insufferable demeanor.

“I can have all the trappings of a person I hate and still be a person I like,” she says.

The two young characters seem to genuinely like each other, or at least they did at some point in their young relationship. But as the play wears on, their sniping heats up. The couple’s interactions have the believable quality of two people who, once enamored with each other, now have come to know each other too well. Petty resentments continually bubble to the surface. They love each other but they also tend to get on each other’s last nerve. 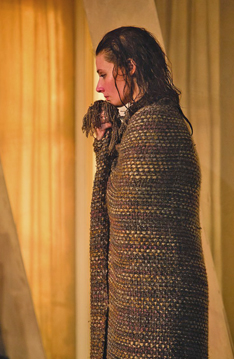 Herzog has a natural feel for dialogue between two upwardly mobile, educated and erudite young people — or at least those who perceive themselves that way.

When Zack playfully suggests that Abby had dressed in a certain outfit one night to impress another man in their social orbit, she bristles.

Meanwhile, he contends she might be happier with someone without such international ambitions.

“You wish you had a corporate job and a husband who shops for lawn furniture online,” he says.

Their big date night ends with Abby drunk and slung over Zack’s shoulder as they re-enter their apartment. As more secrets spill forth, the couple enters dangerous territory, literally and figuratively.

“Do you see how impossible it is for me to love you when you lack an actual core?” Abby rages.

“There are some things about you that are pretty hard to love but I do it anyway,” Zack retorts.

“Belleville” was also hard to love, but the acting was solid, the pacing brisk and the Studio Theatre’s production, as always, excellent.