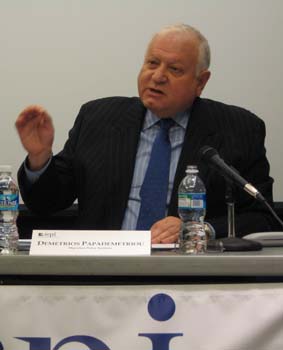 Demetrios Papademetriou, a longtime scholar and expert on international immigration, launched the Washington-based Migration Policy Institute on Sept. 1, 2001, with very definite ideas about movement of people worldwide and the future of the immigration debate.

Ten days later, terrorists slammed airplanes into the World Trade Center and the Pentagon. Suddenly, Papademetriou was forced to reconsider the issue of immigration — at least through the prism of U.S. policymaking.

“It changed the way Washington talked about immigration,” Papademetriou, a native of Greece, said in a wide-ranging interview with The Diplomat. “It put security issues and security language front and center. It also created a new analytical discipline, sort of a new field as it were of security studies. But I’m not sure it necessarily changed the way people think about immigration other than to add a new complexity.”

Thinking about immigration, borders and large-scale global migration — in a pragmatic, nonpartisan way — has consumed Papademetriou for years. He has published more than 250 books, articles, monographs and research reports on migration topics and advises senior government and political party officials in more than 20 countries, including numerous European Union member states.

Papademetriou — who has taught at the universities of Maryland, Duke, American, and New School for Social Research — left the Carnegie Endowment for International Peace, where he had been a senior associate and co-director of the International Migration Policy Program, to co-found the Migration Policy Institute, an independent think tank. The immigration scholar has also held a wide range of senior positions, including convener of the Transatlantic Council on Migration; chair of the World Economic Forum’s Global Agenda Council on Migration; chair of the Migration Committee of the Paris-based Organization for Economic Cooperation and Development; director for immigration policy and research at the U.S. Department of Labor; as well as executive editor of International Migration Review.

As heated and emotional immigration-related rhetoric swirls around the Beltway and across the country, Papademetriou prides himself on leading an organization that takes a disciplined and relentlessly scholarly approach to the subject.

“The institute has made a commitment to what we think is good-governance immigration,” he said. “The institute has succeeded because we tell the truth to the best of our knowledge at a time when everybody has an opinion about immigration and everyone attacks everyone else. The work that we do doesn’t get attacked, except by the extremes. We’re really thought of as essentially thoughtful interpreters and advisors to governments. People come to us to test ideas, to understand what other countries are doing and what the options are.

“They know we play fair. Our point of view is that if you get immigration right in the 21st century, you have done one of the more important things about how economies work and how societies are organized,” he added.

Indeed, the Migration Policy Institute (MPI) has become something of a go-to group for international immigration policymakers seeking objective data and analysis.

The group’s work is guided by four main propositions:

— Sound immigration and integration policies result from balanced analysis, solid data and the engagement of a spectrum of stakeholders, ranging from community leaders and immigrant organizations to the policy elite.

Before starting MPI, Papademetriou had worked in the worlds of government, consulting and teaching, but always “had an international bent” and spent a lot of time writing about immigration. Working in the academic realm in the 1970s though, there were virtually no immigration programs in which to explore topic.

“I would try put in a couple of weeks of study on international migration,” he recalled with a chuckle, describing his time teaching comparative public policy or political science. “Now there are probably hundreds of such programs.”

A couple of decades later as a scholar at the Carnegie Endowment, he and a few colleagues decided that Washington could use a full-fledged immigration policy institute.

“We took a bet that the topic had finally arrived,” he said.

While the Migration Policy Institute’s focus is international — looking at both forced and voluntary migration, including issues such as refugee protection — its presence in Washington at a time when immigration has been a top-tier domestic challenge makes it a natural information resource.

Unlike many in Congress, Papademetriou advocates a piecemeal, rather than comprehensive, approach to immigration legislation. He said extremely powerful special interests, which have become even more entrenched and emboldened since 9/11, make comprehensive reform virtually impossible in the United States today.

“They can bring an awful lot of political pain on individual members of Congress to vote one way or another,” he said.

Some groups emphasize securing the border; others are pushing for some kind of citizenship pathway for illegal workers already in the United States; while others want to make work visas more freely available to highly skilled workers.

“The interest groups are to a very large degree holding the issue hostage,” Papademetriou argued. “The political calculus is if you give Microsoft what they want, they will no longer work with us to fix immigration. The only thing they are interested in is the high-tech visas. If you give agricultural interests what they want, then you peel off those interests away from that coalition that argues for comprehensive immigration reform. If you do it this way, you force everyone to take an offensive model that says it’s all of nothing — and nine years later it’s nothing.”

However, he said, “If you move on and start taking care of one piece at a time, then all these other things become liberated from this all-or-nothing approach.”

“Some people see a political advantage to maintaining the status quo,” he continued. “There are regional interests, various economic interests that don’t see eye to eye, and there are a lot of ideological differences about immigration. You have people who feel the country is going in the wrong direction on immigration policy. When you add all of those things together, basically you have Congress all twisted up like a pretzel … and it’s very difficult to get the 60 votes required [in the Senate to overcome a bill-killing filibuster] to pass a policy that makes sense for the United States.”

He added: “I am not convinced that right now — in July of 2010 — that the Congress has the capacity to pass any immigration bill.”

Frustrated by the paralysis in Washington, some Americans are applauding Arizona’s recent crackdown on illegal immigrants that authorizes police to detain suspected illegal immigrants if they cannot produce documentation — a controversial state campaign that’s touched off a national firestorm and is being challenged by the federal government.

Papademetriou calls it a “horrible piece of legislation” that may actually have positive unintended consequences if the Supreme Court declares the law unconstitutional.

“It could force the hand of Congress to actually do something,” Papademetriou said. “If the administration wins this lawsuit and the Supreme Court comes out clearly and says this is indeed the exclusive authority of the federal government, [that] effectively means the Arizona law and all the copycat laws and other things that have preceded it essentially disappear. Then, there is no choice but the Congress to act. If something good actually comes out of this horrible piece of legislation, so be it.”

Meanwhile, Papademetriou says the United States continues to suffer the consequences of an outdated and outmoded system of immigration.

According to Papademetriou, part of the problem is a lack of flexibility to meet challenges, whether it’s retaining skilled foreign workers to help the country maintain its competitive edge or providing temporary visas for migrant farm workers who do the backbreaking labor that many Americans won’t.

“All that matters is that we have a smart system that protects American workers and at the same time acknowledges there are certain jobs at the low end that are not going to be done by Americans,” he said. “Industrial societies in a very fundamental way have moved beyond these jobs. The Europeans do a much better job of it because they have a much more flexible legal immigration system. The United States does not manage its immigration policy actively or in any other way.

“We need to put the immigration system to the service of the economy,” he added.

Papademetriou said he suspects that President Obama (as well as former President Bush) is sincere about wanting to tackle immigration reform, although he hasn’t been able to suggest a viable path forward.

“I do believe this president, just like Mr. Bush, actually believes that this issue should be resolved,” he said. “President Bush found out either he did not have the political capital or there is not enough political capital in the world to make the difference if the principals in the Senate do not want to make the deal.

“You can have the bully pulpit at your control, but unless you have something very concrete to offer Congress, and unless you can piece together a coalition of interests that will support whatever bill moves forward … then it’s not worth putting your capital behind,” he added. “So far, there isn’t really anything for the president to push forward.