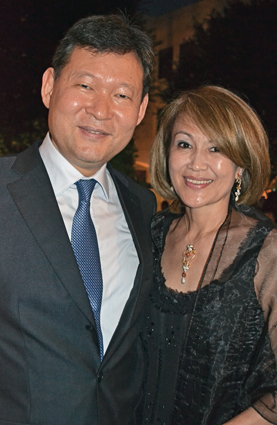 The first time she accompanied her husband to his post in Washington, D.C., their son Gaini attended John Eaton Elementary School; the second time, as a 14-year-old, he went to Sidwell Friends; and now, as a graduate of the University of Essex, 24-year-old Gaini is working as an international consultant back in Kazakhstan.

“We have been very lucky to have had three postings in Washington. It’s a great honor to be back,” said Galiya Umarova, the wife of Ambassador Kairat Umarov of Kazakhstan.

Galiya Umarova and her husband, Ambassador of Kazakhstan Kairat Umarov, met in school during English class. They’ve now been posted to D.C. three times since the early 1990s.

As empty nesters in their roomy residence close to Rock Creek Park, they are no longer needed to help with homework or attend parent-teacher conferences, although these days, Umarova is on the road more than ever. “This time I started driving in Washington,” she told us. “Drivers are so patient here.”

Some native Washingtonians, of course, might be surprised by her flattering assessment of area drivers. But Umarova has had plenty of opportunities to experience D.C. living.

She initially came here when her husband served as first secretary and counselor from 1994 to 1996. They returned from 1998 to 2003 when Umarov was appointed minister counselor at the embassy. In between his stints in the United States, Umarov also served as an ambassador-at-large in the Ministry of Foreign Affairs, ambassador to India and Sri Lanka, as well as the country’s deputy foreign minister — the post he held before returning to Washington earlier this year.

The two met long before the ambassador’s diplomatic career took off. “We were in school together, in English class,” Umarova recalled. “He always told funny stories in English. There were 500 girls at the school and I was the lucky one. I’m so happy that he chose me.”

As familiar as the couple is with American life, most Americans are probably far less familiar with Kazakhstan, even though Umarova says the two countries share some similarities.

Both are large — Kazakhstan, the ninth largest country in the world, is roughly the size of Western Europe, although it is far less populated, with barely 18 million inhabiting its mountains and vast flat steppes.

“Kazakhstan,” Umarova said, “is otherwise much like the United States, with multiple cultures of 140 nationalities living in peace.”

Nearly two-thirds of the country is Muslim, with Christians making up much of the remainder, and is home to a mix of Kazakhs (63 percent), Russians (23 percent) and a smattering of Uzbeks, Ukrainians, Uighurs, Tatars and even Germans.

This former Soviet republic still cherishes its heavily nomadic traditions but since gaining its independence in 1991, it has worked at breakneck speed to build a modern society, including a new capital city, Astana, under the direction of Kazakhstan’s longtime president, Nursultan Nazarbayev. The country’s growing economy is driven by its enormous energy reserves and supplies of minerals and metals such as uranium.

The biggest city in Kazakhstan though is not the capital but Almaty, about a 12-hour drive from Astana. “Almaty is well known,” Umarova said. “It is where I grew up and it is the foremost historical, financial and cultural center.”

“Astana,” she said “is growing rapidly” and is known as “the city of the younger generation. Thirty percent of the city’s population is under 25.”

That’s partly why Kazakhstan has tried to make a name for itself in education. Each year the government gives high school students college scholarships to study outside their country — in the United States, the United Kingdom or in Europe — for the full four years. Recently, Kazakhstan added a program for college graduates to pursue their master’s degrees at the new Astana University, free of charge.

“This was one of the smartest decisions of our president,” Umarova said. “He understands the importance of raising intellectual generations and has made education a top priority for Kazakhstan.”

The image of Kazakhstan as an up-and-coming nation contrasts sharply to the fictional, sarcastic portrayal in “Borat: Cultural Learnings of America for Make Benefit Glorious Nation of Kazakhstan,” the “mocumentary” comedy by British actor Sacha Baron Cohen.

The government of Kazakhstan at first denounced the popular film, angry that it ridiculed the Central Asian nation as an ignorant backwater. Eventually, though, Kazakhs learned to laugh at the satire and realized that any publicity is good publicity. 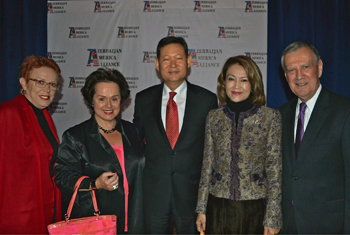 For her part, Umarova chuckled at the film. “We benefited from this movie. It has brought tourists from all over the world and increased interest in my country. The movie is a comedy. As long as it is a comedy, we can laugh. Why not? In the movie, there is nothing similar to Kazakhstan.”

That’s because the Kazakh portion of the satire was actually filmed in a rural Romanian village, which bears little resemblance to the gleaming skyscrapers that punctuate the booming skyline of Astana.

The shiny new capital stands in stark contrast to the dome-shaped, portable tents (called “yurts”) built by Kazakh nomads that have dotted the vast steppes for centuries.

Despite the progress of the last two decades, Kazakhs continue to revere their nomadic past, which some say dates to the days of Genghis Khan, as well as their other traditions. The country is also renowned for its beautiful felt designs, apples, equestrian sports and kefir, a fermented yogurt drink that is now sold in our grocery stores. “We make a lot of milk products. From cow and goat milk, we make cheese, cottage cheese and our own yogurt,” Umarova said.

That’s not the only delicacy Kazakhstan specializes in. “Because of the purity of our water from our wonderful lakes, we have one of the best vodkas in Central Asia. It’s the quality of the water that makes the difference in vodkas,” Umarova proudly declared.

“Apples come from Kazakhstan and we were the first to domesticate horses,” she added. “I don’t ride but my husband and son do.”

Instead, she enjoys playing tennis and golf with her husband and practicing yoga. She also loves to grow and cook her own food, much like she did back home, where she tended her own garden. This summer, Umarova started a new garden in D.C. “I grew them from seeds,” she said, “tomatoes, cucumbers, which lasted until the end of October, eggplants, onions and greens. I love fruits and vegetables.”

Her lean figure certainly does not betray a love of food. I asked how she keeps so trim when the two of them have so many receptions and elaborate sit-down dinners on their schedule every week? Besides fruits and vegetables, she has one other secret: “It’s not what you eat but how much you eat. If you take care of quantity, you don’t have to go on a special diet.”

Although she appreciates Washington, Umarova said that New York City is her favorite town. “I just like being there. New York is modern, dynamic, fast paced, the food is so good and the people are so fashionable,” she said. “You can see fashion trends on the street by just being there.”

While she tries to go to New York at least every month to shop, Umarova, one of the best-dressed diplomatic wives in town, also showcases her native Kazakh felt outfits during the country’s National Day celebration and Nowruz, the Persian New Year that is celebrated throughout Central Asia.

She’s proud of Kazakhstan and equally proud of her countrymen.

Umarova notes that in early November, boxer Gennady Golovkin won the middleweight title against American Curtis Stevens at Madison Square Garden, where the crowd waved Kazakh flags to cheer Golovkin on. She also points out that writer, poet and activist Olzhas Suleimenov has been called one of the greatest thinkers in the world. “He is one of our great Kazakhs.”

Suleimenov was a leader in the movement to close the Soviet Union’s primary nuclear testing site, Semipalatinsk, where hundreds of nuclear tests were conducted by Moscow in Kazakhstan. That legacy is why, upon gaining its independence, Kazakhstan made the bold move to voluntarily rid itself of its nuclear weapons (it held the world’s fourth-largest atomic arsenal) and has since been a vocal proponent of nuclear disarmament.

Umarova said that Kazakhstan’s potential is limitless, given its investment in its people bolstered by its natural oil and gas wealth, as well as sound economic management. “We are the world’s leader in uranium and magnesium, the largest producers of lead and tungsten, and the second largest in chromate, silver and zinc,” she also notes.

And as a crucial link along the ancient Silk Road, Kazakhstan understands the importance of being a conduit for trade — not only of economic goods, Umarova said, but “for progressive scientific and cultural ideas.”