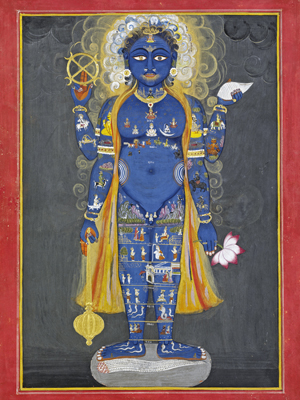 Paintings such as “Vishnu Vishvarupa” are among thr more than 130 objects on display in “Yoga: The Art of Transformation,” the world’s first exhibition about the discipline’s visual history that explores how its meaning changed over centuries as yoga became a global phenomenon.

Many Washingtonians flock to yoga classes to escape the stress of daily life, but few know about the roots of this trendy yet ancient discipline. That’s partly why the Arthur M. Sackler Gallery recently unveiled the world’s first yogic art exhibition, “Yoga: The Art of Transformation,” to showcase the origins and evolution of the practice over the past 2,000 years.

“This exhibition looks at yoga’s ancient roots, and how people have been trying to master body and spirit for millennia,” said Julian Raby, the Dame Jillian Sackler director of the Sackler and Freer Gallery of Art. “By applying new scholarship to both rarely seen artworks and recognized masterpieces, we’re able to shed light on practices that evolved over time — from yoga’s ancient origins to its more modern emergence in India, which set the stage for today’s global phenomenon.”

The first of its kind, the exhibition brings together more than 130 objects from 25 museums and private collections in India, Europe and the United States. The pieces include three monumental stone yogini goddesses from a 10th-century south Indian temple; 10 folios from the first illustrated compilation of asanas (yogic postures) that were made for a Mughal emperor in 1602; and the first movie ever produced about India.

Various activities surrounded the high-profile launch of the exhibit, including the gala “Some Enlightened Evening,” with none other than actor Alec Baldwin and his wife Hilaria (a yoga devotee), and, for the masses, a free public festival to celebrate Diwali, the Indian festival of lights. Other highlights include tours, yoga-inspired art workshops, musical performances and free yoga classes throughout the day — all of which was made possible thanks in part to the Smithsonian’s first major crowdfunding campaign. Called “Together We’re One,” the appeal for funds was launched in May and raised more than $174,000 over six weeks — a reflection of yoga’s enduring mainstream popularity. 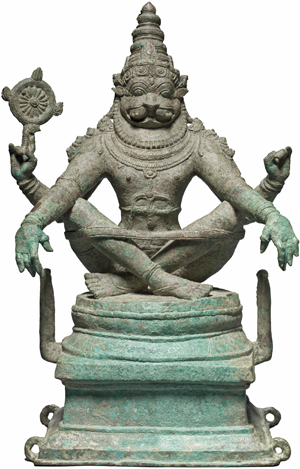 Photo: The Cleveland Museum of Art

Yet long before “downward dog” and “namaste” became household terms, Indian spiritual leaders were exploring physical, mental and spiritual states as early as 500 BC. Over time, the practice became encompassed in various schools of thought, including Hinduism, Buddhism and Jainism. While yoga today is commonly associated with a series of physical movements, the yogic poses — “asanas” in Sanskrit — did not emerge until the mid-18th and 19th centuries. Yoga in ancient India consisted of deep meditation and ascetic practices to relieve the mind and body of misery associated with the endless cycle of reincarnation.

While yoga is a transformative experience for those who practice it, the tradition itself has undergone various reincarnations over the years that helped shape culture, religion and history. The Sackler takes museum-goers back in time to a world where limits were tested and yoga was practiced everywhere from mountains and hermitages to charnel grounds (an above-ground site for the putrefaction of bodies). It was a time when yogis, who were part of exclusive groups with other yogis, were recruited as spies because they traveled independently and could evade suspicion. Because of the power and special reverence they were given, these yoga masters were despised by the British during their colonization of India and were often the object of smear campaigns in which they were depicted as strange and uncivilized.

“These works of art allow us to trace, often for the first time, yoga’s meanings across the diverse social landscapes of India,” said Debra Diamond, the museum’s associate curator of South and Southeast Asian art. “United for the first time, they not only invite aesthetic wonder, but also unlock the past — opening a portal onto yoga’s surprisingly down-to-earth aspects over 2,000 years.”

“Three Aspects of the Absolute”

Modern yoga, as we know it in the West, came to fruition only in the late 19th century. This was in large part due to an Indian Hindu by the name of Swami Vivekananda, who is also featured in the exhibition. Before spandex yoga pants and mats were a common site on trendy urban streets, the Indian monk arrived in Chicago from Bombay in 1893 to speak at the launch of the Parliament of the World’s Religions. He captivated Americans audiences with his repetition of mantras (telling Americans to not focus as much on “doing” as opposed to just “being”) and philosophy of “work and worship.” He even caught the attention of well-known writers such as Henry Miller, Aldous Huxley and Leo Tolstoy, who wrote: “Since 6 in the morning I have been thinking of Vivekananda.” The famed Russian novelist also once observed, “It is doubtful if in this age man has ever risen above this selfless, spiritual meditation.”

Whether the swanky cult — and multibillion-dollar industry — that has built around yoga today qualifies as the same kind of selfless, spiritual meditation practiced for ages is a subject of debate, but there is no doubt that for centuries, man has sought out enlightenment both on and off the mat.

Yoga: The Art of Transformation