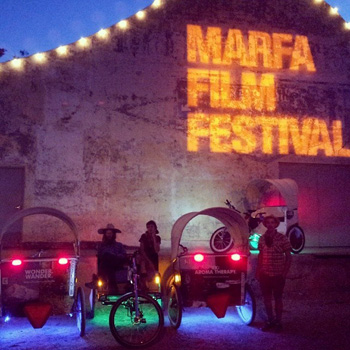 When The Washington Diplomat was first invited to the Marfa Film Festival about a month before its July start date, this writer initially declined because of the short notice, a previous engagement, and the time and distance required to travel to the small West Texas town of Marfa. It’s a long three-hour drive from the nearest major airport, either El Paso or Midland, neither of which can be reached via a direct commercial flight from the East Coast.

Upon reconsideration, I decided I could not pass up the opportunity to visit fabled Marfa, which punches well above its weight for a tiny town with a population under 2,000. To get a change of scenery from New York City, the late minimalist sculptor Donald Judd moved to Marfa in the early 1970s, setting in motion a chain of events that has turned a once-dying ranching town into a cultural mecca on the international art circuit, with three contemporary art institutions.

The tiny town of Marfa, Texas, has become a cultural mecca, with three contemporary art institutions and a popular annual film festival.

I was picked up at the El Paso Airport by Marfa Film Festival Director Robin Lambaria, who told me that “2014 feels like a transformative year for cinema. Something positive has definitely shifted out there.”

A highlight of this year’s festival was the filmmakers’ dinner, where guests sat on valuable chairs designed by Judd. The gourmet meal took place in the Chinati Foundation, the contemporary art museum Judd founded that displays many of his large-scale installations, which were a treat to view in the special light of the magic hour approaching sunset.

The Marfa Film Festival’s intimate scale and easy-going nature distinguishes it from the more frantic, complicated, larger film festivals like Sundance, Tribeca, AFI Docs or Filmfest DC (which unfortunately ran this spring for the last time). Typically, only one film at a time is screened in Marfa, though there were parallel screenings in nearby Alpine.

Marfa’s dusty small-town look along with the big skies and vast landscapes of West Texas — immortalized on screen in “Giant,” “There Will Be Blood” and “No Country for Old Men” — provide a unique backdrop for the film festival. That is especially true for nighttime outdoor screenings at the Marfa Golf Course, where films were projected on a screen with the sweeping desert in the background, contributing a distinctive aesthetic to the experience.

Watch future D.C. listings for the U.K./U.S. co-production “Buttercup Bill,” a mesmerizing Southern gothic psychosexual thriller character study by directors Émilie Richard-Froozan and Remy Bennett (also lead actress), which made its world premiere outdoors with the cast and crew in attendance. As Bennett noted, everything seems more surreal at the Marfa Film Festival.

Significant reprises from the much larger South by Southwest (SXSW) festival also made an appearance, including Austin filmmaker Richard Linklater’s much-lauded, revolutionary coming-of-age tale “Boyhood” (which recently opened in D.C.) and the Marfa Film Festival opening-night film “Impossible Light” (to be released in D.C.), Jeremy Ambers’s revealing documentary about the making of Bay Lights, the monumental public art installation on the San Francisco Bay Bridge. In a nice homecoming of sorts, Bay Lights LED artist Leo Villareal’s great-great grandfather Luke Brite was one of the founders of the town of Marfa.