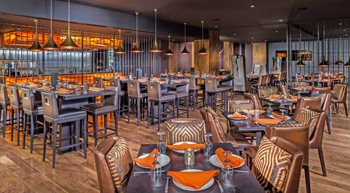 Earlier this year, Richard Sandoval, the award-winning international restaurateur/celebrity chef who has built a global culinary brand while treating D.C. diners to his contemporary version of classic Mexican cuisine, opened Toro Toro, a pan-Latin steakhouse with a sister restaurant in Dubai. In fact, Sandoval, a former tennis player, has 30 restaurants under his belt from Serbia to Qatar. Toro Toro joins his growing local empire alongside other popular Sandoval staples such as Zengo, Masa 14, El Centro and Ambar.

The restaurant takes its name from the Spanish word for bull and from the Japanese word for the fatty underbelly of the blue-fin tuna that figures prominently in sushi, reflecting its Latin, and subtly Asian, underpinnings. In creating Toro Toro, Sandoval looked south of his roots in Mexico City to tap the cuisines of Central and South America. He merged a Latin-steakhouse concept with a small-plate approach reminiscent of Masa 14 (the Latin-Asian restaurant he owns jointly with master sushi chef Kaz Okochi), helping it stand out among several other steakhouses that have opened in D.C. recently.

Toro Toro’s menu offers distinct dining experiences. On the one hand, there is a dazzling array of hot and cold small plates that are perfect for sharing. On the other hand, a variety of churrasco and grilled meats, seafood entrées and side dishes offer a more substantial meal. It is a challenge trying to do both in the same visit unless you have hours to spend and a huge appetite. 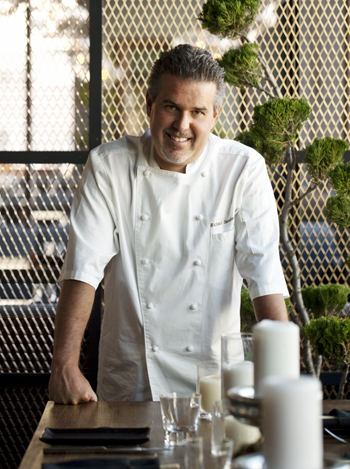 Richard Sandoval adds to his local and global restaurant brand with the Latin-Asian-inspired Toro Toro.

The small plates, some of which are not particularly small, cover the Latin landscape from sea to shore in an interplay of surf and turf. Tiny seafood arepas are loaded with scallops, shrimp and squid, while the empanadas are packed with beef or sweet corn and cheese. A heap of crispy shrimp chicharron topped with thin slices of pickled chilis pairs well with flatbread topped with braised short rib, arugula, manchego cheese and horseradish. Meanwhile, the seared sea scallops topped with a parmesan crisp in lime butter sauce are a perfect complement to the Peruvian lamb anticucho skewers.

The small plates include two versions of ceviche, both of which come in generous portions. One is classically Latin, with seared shrimp, calamari and scallops in a marinade of ginger, chilies and lime juice. The other, ceviche Nikkei, is decidedly Asian in flavor (and decidedly tasty), featuring ahi tuna, ponzu, cucumber, avocado, quinoa and sweet potato in sesame oil. Another unusual East-West dish is the causa Toro Toro, a potato “sushi” cake that consists of tuna tartare, rocoto aioli, avocado and sesame.

On the entrée side of things, you can order a churrasco skewer of different grilled meats or a steak from a straightforward selection of cuts, as well as a rack of lamb, veal steak and grilled fish of the day. There are also several specialty dishes such as a spicy miso salmon and the Chilean sea bass prepared with shrimp, scallops and squid in a Peruvian Cau Cau sauce. Both are proof that Sandoval is as comfortable on sea as he is on land.

Toro Toro’s menu is definitely designed to appeal to protein lovers, though it does offer a few salads, including a refreshing heirloom tomato dish that pairs bite-size tomatoes with watermelon balls, hearts of palm, avocado and herb salad all dressed with a mild chipotle vinaigrette.

Toro Toro is a great place to visit with a group of hungry friends who are willing to share. With enough people, you might do justice to the variety of dishes Sandoval and his staff have created. 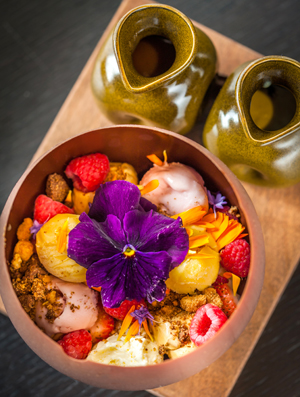 The La Bomba mega dessert is among the pan-Latin steakhouse offerings at Toro Toro.

But the very best way to experience Toro Toro, if you have the time and the budget, is the Rodizio experience, which the whole table has to order. Rodizio is an all-you-can-eat serving style in Brazilian restaurants, and at Toro Toro, this means not only are all the churrasco dishes and sides included, but also the small plates. The nice thing about it is you can sample as little or as much of the grilled bacon-wrapped picanha steak, rib eye, tenderloin, chicken, lamb chops, sausage and shrimp as you want (provided you get the hang of the little tongs). It is possible to get a taste of almost everything from the grill side (including the sides that run the gamut from truffle fries to Oaxaca mashed potatoes) and still sample the small plates.

If after all that you still want dessert, the healthy way to go is the surprisingly delicious grilled pineapple. Cooked whole on a churrasco skewer, it caramelizes as it cooks, giving it a deeper and richer flavor than the fresh fruit. If that is too restrained, the house special, La Bomba, is the opposite extreme. Without giving too much away, this dish for two includes cream cheese mousse, passion fruit sorbet, chocolate cookie crumbs, strawberries and cream, dulce de leche ice cream, mixed berries, warm caramel sauce, vanilla bean cream anglaise and, to top it off, edible flowers. You just have to see it, and eat it, to believe it.

After La Bomba, the other choices seem tame, but the Cortadito Bar — chocolate-coffee mousse and milk chocolate — is an equally rich, but small, choice. On the tropical side, a somewhat self-conscious deconstructed key lime pie and a coconut flan espuma (served with mouth-puckering tangerine granite and tamarind gelée) are deceptively light. 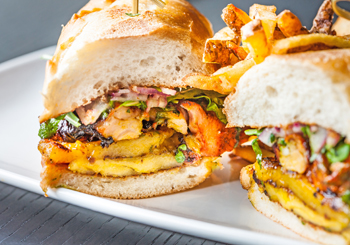 The chicken a la brasa sandwich

A meal at Toro Toro is labor intensive, whether you are doing the small plates, entrées or churrasco dishes. Efficient service is critical to making it work and Toro Toro staff get that. While staging sometimes seem a bit off, the staff are agreeable and knowledge, and despite their frequent visits to the table are surprisingly unobtrusive.

Perhaps befitting the menu’s focus on meat and hearty eating, Toro Toro is a cavernous, dark space, with 12,400 square feet of space punctuated by — what else? — cows, courtesy of LW Design Group LLC of Dubai. The interior is rich with bovine tans, browns and black with the occasional orange accent. Lest you miss the point, cowhides grace armchairs, bar stools and even the bathroom-stall doors. And if that is not clear enough, images of cow skulls adorn the walls of the large party space on the lower level. Back lighting behind the bar transforms the panels into a glowing sunset on the South American lowlands, as if there is some vaguely exclusive safari lodge about the place that is reinforced by decorative game animal skulls.

But late in the evening, it is the nightlife not the wildlife that dominates Toro Toro. On weekends, the lounge is open for dancing late into the evening, and guests can order ultra-premium Latin liquor and snacks off a special late-night menu.

Toro Toro is among the newer breed of steakhouses opening in the area that no longer think a huge slab of meat, baked potato and green salad is an ideal meal. It is not just a broader menu with exotic ingredients, it is an altogether different experience. But Sandoval has skillfully overlaid his hybrid restaurant concept with the old steakhouse footprint to make it attractive to both traditionalists and fusionists.

It’s the mark of a successful restaurateur who doesn’t mind mixing up cultures and cuisines up to appeal to a broad spectrum of tastes. And in Toro Toro, Sandoval has stayed true to his Latin roots while branching out into bullish territory.