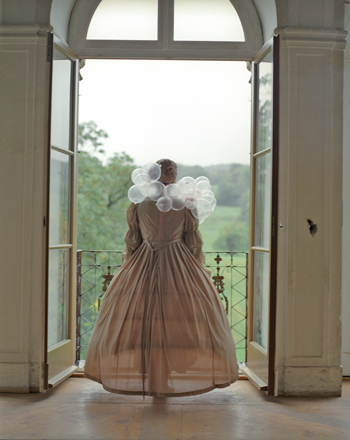 Janaina Tschäpe’s “Lacrimacorpus” is one piece on display at the National Museum of Women in the Arts as part of “Total Art: Contemporary Video.”

The National Museum of Women in the Arts (NMWA) is the only major institution of its kind dedicated to showcasing women who forged a place in the art world — in painting, sculpture, printmaking or the literary arts, for example — despite being historically underrepresented in that world. One place where female artists established themselves as pioneers, however, was video art, which came into its own in the 1960s and 1970s.

“Total Art: Contemporary Video” examines the diversity of their footprint in this field, ranging from early video pieces in which women recorded their work as performance artists or created films that critiqued mainstream television and cinema, to sophisticated, immersive videos that incorporate digital technology, animation and meticulously constructed viewing spaces.

In fact, women made their mark alongside men in photo-based art since the medium’s inception in the 1800s.

“NMWA’s exhibitions of historical art often tell the story of women finding success within social systems that typically excluded them; however women practiced photography from the time of its invention in the 19th century,” said NMWA chief curator and exhibition curator Kathryn Wat. “Women were integrally involved with the development of photography — and later video — into fine art forms. Photo-based exhibitions such as ‘Total Art’ emphasize women’s innovations and vision rather than primarily contextualizing their work.”

That vision grabs visitors the moment they set foot into “Total Art” and find themselves face to face with a striking, fully clothed redhead submerged in turquoise water. The image is part of “La Petite Mort,” a work by American photographer and filmmaker Alex Prager that explores the similarities between death and unrivaled love — agony and ecstasy as two sides of the same coin. The French title, “the little death,” describes the feeling of unconsciousness following the release of energy traditionally associated with an orgasm but which can be applied to other similar sensations.

In the case of Prager’s photo series and accompanying video, “La Petite Mort” refers to the feeling before actual death, as the attractive protagonist is seen willingly standing in front of a moving train. Later, it conveys the powerful experience of love as she emotionally walks toward her lover.

“It has been said that the act of dying and the act of transcendent love are two experiences cut from the same cloth. The former a grand exit, the latter a slow escape. Man’s closest moment to seeing God,” the video narrator finishes. 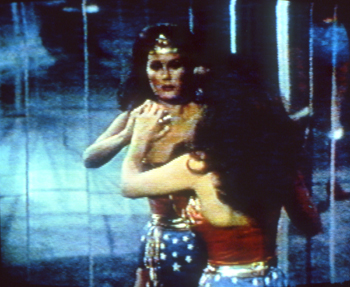 The advent of video in the 1960s provided artists with an additional tool to transport viewers into their imaginations. The emptiness of the large exhibition spaces at the NMWA really allows the viewer to become immersed in the subject of the videos, which span the globe. “Total Art” features 10 artists hailing from different countries including South Korea, Germany and Kenya.

In Margaret Salmon’s “Ninna Nanna,” or “lullaby” in Italian, three parallel video screens in black and white portray the daily routines of new Italian mothers. Salmon shot the film while completing a six-month residency in Italy after winning the Max Mara Art Prize for Women. The artist was herself a new mother when she began filming the project, which offers a fresh look into the feeding, bathing and soothing habits of new motherhood.

Inspired by Spanish Golden Age artist Diego Velázquez’s painting “Las Meninas” (Spanish for “the maids of honor”), British-born American Eve Sussman reinterprets the work in her 10-minute video “89 Seconds at Alcázar.” The painting depicts a room from King Philip IV’s Royal Alcazar of Madrid, with various figures from the Spanish court — maids, chaperones, bodyguards, pets, to name a few — each striking a pose and absorbed in his or her own moment. 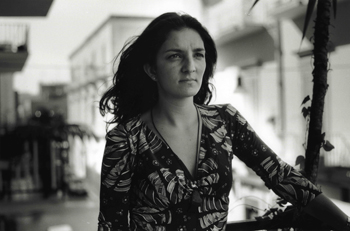 “The painting is really compelling and striking in the psychology of the characters … it has an almost photographic quality,” said Sussman in an interview. “Velázquez is able to capture sort of psychological moments and emotions within his characters that you don’t see very often in paintings.”

The juxtaposition of light and dark, as seen in “La Petite Mort,” echoes a duality seen in German-born Janaina Tschäpe’s “Lacrimacorpus” (Latin for “tear body”). The three-and-a-half-minute clip depicts a woman in a bonnet and dress rapidly dancing around in circles in a large room with floor-to-ceiling windows as a piano plays in the background. She has balloons attached around her neck as a reminder of the sorrow and tears she carries around with her — hence the work’s title. The setting of the video takes place in the German castle of Schloss Ettersburg, which served as both poet Goethe’s summer residence and a building that overlooks the Nazi concentration camp of Buchenwald.

While women often stood at the forefront of video art, they were rarely featured in museum surveys of the art form, according to the NMWA, which aims to rectify that omission. All 10 artists featured in “Total Art” use the medium of video to provide an extra sensory dimension to the artistic experience they seek to create. This adds depth to the subject their work examines, whether it is love, death, racism or defying stereotypes.