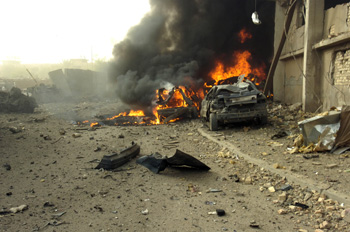 Since the so-called “Islamic State” in Iraq and Syria plunged violently into the Western consciousness over the summer, the natural question to ask, whether you’re a policymaker, pundit or concerned citizen, has been: How could this have possibly happened?

How could a marauding army of perhaps tens of thousands of fighters emerge seemingly overnight, conquer large parts of Iraq and Syria, and declare an oil-rich caliphate? That question will prompt short- and medium-term military and political answers to the ISIS threat, whether through airstrikes and the anti-ISIS coalition that U.S. President Barack Obama has assembled, or through efforts to make the Iraqi government less sectarian.

But there is another question that counterterrorism experts are asking, the answer to which might address the problem in the long term: Is this a new mold of radicalization, or a bridge from the past?

The remnants of a car bomb are strewn on a street outside the Al Sabah newspaper office in the Waziryia district of Baghdad, Iraq, in 2006. Many of today’s battle-hardened Islamic State militants who have captured parts of Syria and Iraq are descendants of an al-Qaeda affiliate that fought American troops during the Iraq War.

Experts say the oft-used prism for studying radicalization based on how well “integrated” Muslims are into society, as measured by education, vocation, wealth or some other rubric, is insufficient in explaining ISIS’s appeal to its sympathizers in the United Kingdom. Communal narratives countering extremism, coming from British Muslims themselves, may prove to be more important in dulling the allure of groups like ISIS than any abstract measure of “integration.”

As several hundred Britons have left the U.K. to fight for ISIS, the problem is more acute, and personal, in the United Kingdom than the United States, although both sides of the Atlantic are now scrambling to better understand the group — and what to even call it. After being variously referred to as the Islamic State of Iraq and Syria, or al-Sham (ISIS) and the Islamic State of Iraq and the Levant (ISIL) by Western media, as well as Daesh, an Arabic acronym, its members declared that they would simply be known as the Islamic State.

But many rightly argue that referring to ISIS as the “Islamic State” is an affront to the vast majority of the world’s more than 1.6 billion Muslims who are peaceful. Several British Muslim groups recently sent a letter to British Prime Minister David Cameron arguing that the group should be referred to as the “Un-Islamic State” and that any reference to the “Islamic State” is a slur upon the Muslim faith. In a nationally televised address, U.S. President Barack Obama said the group is “not Islamic,” adding, “No religion condones the killing of innocents. And the vast majority of ISIL’s victims have been Muslim.”

What the Numbers Tell Us

Despite the group’s atrocities, its ranks are apparently growing. The exact number of ISIS fighters is unknown. The CIA recently said the number could range from 20,000 to 31,500, a huge jump from a previous assessment of 10,000 fighters. Included in, or perhaps overlapping with, that swath of people are an estimated 15,000 foreign fighters who have gone to Syria, CNN reported on Sept. 12, citing a CIA source. Of those 15,000, about 2,000 are Westerners, according to the report.

Zooming in further, U.S. officials estimate that over 100 Americans have left or signaled intent to leave to fight in Syria, though the number of those identified by the U.S. government as successfully joining ISIS was reportedly less than a dozen as of August.

The likelihood of these Americans returning to the United States undetected seems slim. Will McCants, director of the Brookings Institution’s Project on U.S. Relations with the Islamic World, says that given how closely authorities are tracking Americans who have joined ISIS, it will be “awfully hard for them to get into this country undetected.”

In his Sept. 10 speech laying out a strategy to “degrade and destroy” ISIS, Obama said that “we have not yet detected specific plotting against our homeland” coming from ISIS, but added that its capability could develop if the group was left unchecked.

British Prime Minister Cameron, on the other hand, has depicted ISIS as a direct threat to Britain. The beheading of American journalist James Foley by a supposed British citizen “was clear evidence … that this is not some foreign conflict thousands of miles from home that we can hope to ignore,” Cameron said in an Aug. 29 speech, two weeks before a British aid worker was also beheaded, possibly by the same executioner who killed Foley. “The ambition to create an extremist caliphate in the heart of Iraq and Syria is a threat to our own security here in the U.K.”

That British citizens are so prominently involved in the crimes of ISIS seems to partly underpin Cameron’s argument for beating back the group’s advances. But it is not a new national identity crisis, rather something with which Britain and its citizens have long wrestled.

ISIS’s threat to the British Isles and continental Europe is likely more acute because of the greater number of Europeans fighting for ISIS and the relative ease with which one can travel from Europe to the Middle East, experts say. 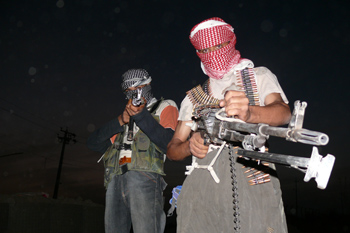 Two armed Iraqi insurgents belong to a faction that carried out attacks on American and coalition forces during the Iraq War. Some Islamic State militants in Iraq are homegrown Sunnis who have turned against the Shiite-led government, although nearly 2,000 fighters from around the world have also joined the group, for myriad ideological and practical reasons. (Photo: Menendj / Wikimedia)

Many recruiters to militant Islamic causes tend to be foreign fighters who have returned home to various parts of Europe, whereas there are fewer active recruiters in the United States, according to McCants. The presence of militants-turned-recruiters in Europe “creates a self-reinforcing cycle” that helps a pipeline of foreign fighters flow from Europe to the Middle East, he added.

Estimates of the number of Britons fighting in Iraq and Syria vary. Prime Minister Cameron recently said at least 500 people have left Britain to fight in Syria and “potentially Iraq.” Another British government estimate reckons that 800 Britons are fighting for ISIS, according to a recent USA Today report.

The difficulty of getting precise data on foreign fighters underlines the challenge authorities have in tracking and preventing their citizens from returning and carrying out domestic attacks.

Britain’s immigration ministry has “very complicated matrices” to try to determine how many people have left the country to fight in the Middle East, but still struggles to narrow the number down, said Haras Rafiq, an outreach officer at Quilliam Foundation, a London-based counter-extremism think tank.

But whatever the exact number of Britons lured by ISIS or other terrorist groups in the region, it is substantial and has British authorities worried. The psychology at play when a British-accented jihadist beheads a British citizen on camera adds an existential dimension to the threat.

British authorities, and British society as a whole, have been grappling with the threat of radicalized Islamists for some time. On July 7, 2005, four young men who grew up in Britain detonated a series of bombs in London that killed 52 people. That homegrown horror prompted self-reflection and soul-searching, and a U.K. government task force to counter extremism (of which Rafiq was a part).

More than nine years later, the issue remains hanging in the balance. British writer and intellectual Kenan Malik wrote in 2011 of a “failed policy of multiculturalism” that U.K. authorities adopted in an effort to better integrate British Muslims into society after they faced xenophobic violence in the 1980s. “Politicians effectively abandoned their responsibility to engage directly with minorities, subcontracting it out to often reactionary ‘leaders,’” he wrote.

A December 2013 report on extremism produced by Cameron’s office suggests that the U.K. government retains this top-down approach to combating extremism by engaging civic leaders. “Many institutions do not have the capacity to play their full part in challenging extremists, even when they want to,” the report said. “The government has a role in leading this challenge, ensuring that communities where extremists operate, and the organizations working against extremists, have the capability to confront it themselves.”

There may be only so much government can do to intervene at the civic level without appearing divisive toward a Muslim minority. There are communal narratives of isolation — the notion that one cannot be both British and Muslim — that are likely best countered by British Muslims themselves.

“American scholars seem to have grappled with intellectually the counter-narrative far more strongly in the U.S. than they have in the U.K., where I feel as though it’s less of a counter-narrative and more of a preventive means to stop the export of fighters,” he added.

Rafiq, of the Quilliam Foundation, agreed on the urgent need for a communal counter-narrative to radical Islam. “The ideas and the ideology and the theology that underpin it have really gone unchallenged and unchecked. As a society, I think we’ve failed to tackle them,” he said.

Communal narratives of Islamic extremism aside, there may be something more straightforward that spurs young Britons, or Westerners for that matter, to join ISIS: a desire to be on the winning side of a revolution. ISIS has in a short time conquered land slightly larger than Britain itself, according to a Washington Post report that cited data from the National Counterterrorism Center.

Britons sympathetic to ISIS’s cause may think, “‘How is it possible that ISIS could have taken part of Iraq so quickly against a powerful enemy, a powerful army, unless God [was] on their side?’” said Rafiq. “This has emboldened a lot of people.”

Some ISIS converts may believe they’re joining a noble cause by standing up to perceived Western dominance or indifference in the region, particularly in Syria, where nearly 200,000 people have been killed in the violence. Idealism — and hatred for Syrian President Bashar al-Assad — may be as much of a motivating factor as religion is for people searching for some kind of meaning in their lives. Other recruits are lured by ISIS’s promises of power and glory, packaged together in a slick jihadist social media campaign capable of penetrating the comfortable middle-class confines of Britain.

In that sense, a military response to ISIS could have unintended consequences for the group’s ability to attract Britons to its bloody cause. For the old wound caused by poisonous narratives of British-Muslim identity to heal, it may take a deeper understanding of local dynamics wholly unrelated to airstrikes in the Middle East.