Home The Washington Diplomat June 2010 Toxic Tans? Why Baking in a Bed To Get Golden Glow Isn’t Hot Idea 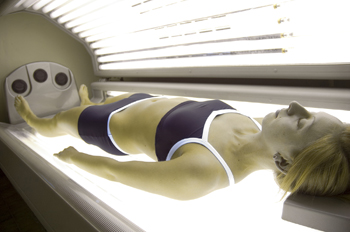 Summer is upon us at last! For some people, especially women — even more especially, those in their teens and early 20s — the onset of beach weather brings with it a powerful urge to imbue skin with a “golden glow,” sending them scurrying to the tanning salon.

Back in the day (more days ago than I care to admit), I used to be one of them. Spring break in Cancun? A January escape to St. Lucia? Bring on the goggles and the eerie glow of the tanning booth! A decade or so later, I seem to be none the worse for wear — but it turns out I may just have gotten lucky.

After years in which tanning salons advertised themselves as the safe alternative to bronzing in the sun and risking melanoma, an avalanche of new information has come out over the past several years indicating that baking in the bed may be no better — and even worse — than basking at the beach.

Last July, the International Agency for Research on Cancer (IARC) elevated tanning beds to its highest-risk category for classifying carcinogens, Group 1, or “carcinogenic to humans.” That puts them right up there with asbestos, cigarette smoking and formaldehyde. (Previously, they had only been considered “probably carcinogenic.”)

It’s not an overreaction: Current research shows that tanning bed use that starts before the age of 30 raises the lifetime risk of developing melanoma by 75 percent.

The cancer-causing effects of the sun are the result of its ultraviolet rays, but tanning salons have long claimed that the real dangers came specifically from ultraviolet B (UVB) rays, making tanning beds and their UVA rays a safe option. But the IARC report, which appeared in the Lancet Oncology, implicated UVA rays in cancer risk as well.

As a result of all this, the Food and Drug Administration is now considering placing tighter restrictions on tanning beds and salons. At a hearing in March, many experts urged the FDA to ban indoor tanning for cosmetic uses altogether; others called for restrictions on tanning for those under 18. So far, 32 states regulate indoor tanning in some way, mostly by prohibiting youth under 14 from tanning or by requiring parental consent for tanners under 18. Tanning-related bills are also in the hopper in at least 20 states this legislative session, but federal laws or regulations would apply across the board.

“What was formerly considered a disease of older men is ballooning in young women, the very target audience and number-one customer of the tanning industry,” Dr. William James, president of the American Academy of Dermatology, told the panel at the hearing.

The expert panel also urged the FDA to consider changing how tanning beds are regulated, by raising their classification to “Class II.” That would allow the agency input on their design, including setting limits on the levels of radiation emitted.

But despite this increasing scrutiny, as well as a new 10 percent tax on tanning imposed as part of the health care reform package passed earlier this year, tanning salons remain wildly popular, with about 1 million Americans — 70 percent of them female — going for a tan on any given day.

Tanning beds might even be addictive, suggests a report published in April in the Archives of Dermatology. In a study of college students, between 31 percent and 39 percent of the 229 students who had used indoor tanning beds met the criteria for addiction, including an inability to cut down on their use and missing other plans to go tanning instead. There’s been speculation that the endorphin release sparked by UV-light exposure might play a role in this phenomenon.

So if you’re concerned about the risk of skin cancer and trying to cut back on your tanning-bed forays, but still don’t want to look like Casper the Friendly Ghost, what can you do? Well, it doesn’t provide the same endorphin rush, but today’s self-tanners can yield a fine golden glow without the same risk — and without the orange tint of the self-tanners from a couple of decades back. If you have trouble thoroughly applying self-tanner on your own, many beauty salons and spas now have spray-tan booths that are kind of like a human car wash, but with bronzer. (But skip tanning pills because they’re not safe, either. When used too heavily, they can cause liver damage and the formation of crystals in the retina of your eye.)

If you absolutely cannot kick the tanning-bed temptation, then even more than everyone else, it’s essential that you keep an eye on your skin for any signs of suspicious changes that could be melanoma, the most deadly form of skin cancer. Examine your skin at least once a month, after a shower or a bath, and don’t forget areas like the soles of your feet, spaces between fingers and toes, underarms, and the back of your neck and scalp. The American Melanoma Foundation has images online that can help you get a better idea of what you should be looking for, at www.melanomafoundation.org/prevention/abcd.htm.

And remember the ABCD rule:

A: Asymmetry — a normal mole or freckle is completely asymmetrical. If you have one that isn’t, especially if it’s new or didn’t look that way before, it needs to be checked out.

B: Border — moles or spots with blurry or jagged edges are suspicious.

C: Color — normal spots and freckles are usually one color; if you have one that’s multi-hued, check with your doctor.

D: Diameter — anything larger than about the size of a pencil eraser also needs to be seen by a doctor.