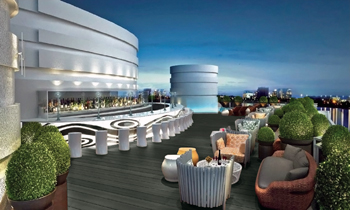 More than 50 years ago, John F. Kennedy described Washington as a “city of Southern efficiency and Northern charm.” Some argue that this dynamic hasn’t changed much over the decades, but the notable exception to this old axiom is the city’s growing collection of luxury hotels, where staff demonstrate Northern efficiency and Southern charm, coddling and pampering well-heeled visitors.

A rendering shows the rooftop of the newly revamped Watergate Hotel, which is undergoing an extensive $125 million renovation after shutting its doors in 2007.

Decadent hotels like the Four Seasons, the St. Regis, two Ritz-Carltons, Mandarin Oriental, the Jefferson, the Hay Adams, Capella and Park Hyatt have made D.C. an increasingly appealing destination for visitors and businesspersons who aren’t pinching pennies. Next year, travelers in search of high-end accommodation will have two more sumptuous options to choose from: Trump International’s brand-new hotel in the historic Old Post Office Pavilion on Pennsylvania Avenue and the newly refurbished Watergate Hotel, fresh off a $125 million renovation.

The two projects not only reflect the city’s growing financial clout, they also symbolize the original source of power on which the nation’s capital was built: politics.

The Watergate complex is synonymous with the 1972 break-in that ultimately derailed Richard Nixon’s presidency. The Trump brand, meanwhile, has now come to be associated with the surprising presidential bid of Donald Trump, the celebrity real estate tycoon who’s leading the Republican pack.

These political back-stories are largely irrelevant to the two hotels’ daily operations, but they imbue them with a certain Washingtonian cachet. Of course, money and politics have always been inextricably linked, but when it comes to D.C. luxury, money may trump politics: You don’t need to be one of nearly two dozen presidential contenders to book a room in either property, but you will need deep pockets.

“Washington has just one true five-star hotel, and that is the Four Seasons,” said Mickael Damelincourt, a Parisian hotel industry veteran who will be the Trump Hotel’s managing director. “We intend to be the second one — a world-class, five-star hotel in a truly iconic building in the heart of Washington.”

The Old Post Office Pavilion is indeed one of the city’s iconic landmarks. Built in 1899 in the Romanesque Revival style, it features a 315-foot clock tower, which houses the official U.S. Bells of Congress, a bicentennial gift from England celebrating the end of the Revolutionary War. (When the hotel opens next September 2016, there will be a separate elevator for tourists who want to climb the tower to enjoy panoramic views of the National Mall.) Despite the building’s grandeur, critics panned it when it opened, and the pavilion was almost demolished on multiple occasions, most recently in the 1970s, when the Nixon administration wanted to bulldoze it to expand the Federal Triangle complex.

It served as a post office until 1914 and was an office building for decades. In 2013, the U.S. General Services Administration leased the property for 60 years to the Trump Organization, which is knee-deep in a $200 million redevelopment of the building. When complete, the hotel will feature 39,000 square feet of meeting and event space, 262 guestrooms, 31 suites, restaurants, a 13,000-square-foot ballroom and a 10,000-square-foot spa and health club. According to the Trump International website, the heart of the hotel will be its Cortile, “a soaring nine-story atrium that will function as the hotel’s gathering place, comprising the grand lobby and lounge.” 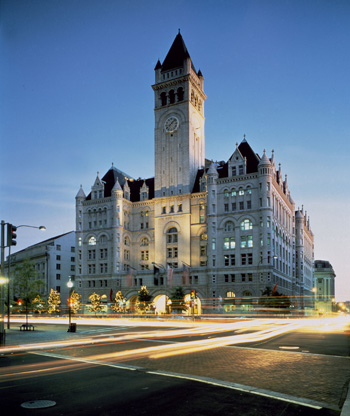 The Old Post Office Pavilion on Pennsylvania Avenue will be home to the new Trump International Hotel that opens later next year.

But what remains to be seen is whether the fiery billionaire’s controversial comments about Mexican immigrants — Trump said that Mexico was sending the United States its “worst people,” among other colorful remarks — will have any impact on its hotel chain, which now has 13 locations, including six in America. A number of D.C.-area lawmakers and others have called for boycotts, but whether such efforts gain traction also depends on the trajectory of Trump’s presidential campaign. History also suggests that boycott efforts tend to lose steam after the incident that sparked the fury is forgotten.

For example, Hollywood moguls boycotted the Beverly Hills Hotel after its owner, the sultan of Brunei, implemented a strict interpretation of Sharia law that called for stoning gays and adulterers last year. But the Hollywood Reporter recently reported that many celebrities, including some with close ties to the LGBT community, were returning to the hotel and even posting photos of themselves there on social media. And sometimes any publicity, even bad publicity, can be good for sales, a phenomenon Trump himself has exploited. In 2012, there were calls to boycott Chick-fil-A, a fast-food restaurant chain, after Dan Cathy, the company’s president, made controversial remarks opposing gay marriage. But the company ended the year with sales up 14 percent and also opened 96 new franchises.

José Andrés, the renowned Spanish-American chef and local brainchild behind Jaleo, was to open a flagship restaurant in the Trump Hotel but pulled out in July after Trump’s comments on Mexican immigrants.

“Donald Trump’s recent statements disparaging immigrants make it impossible for my company and I to move forward with opening a successful Spanish restaurant in Trump International’s upcoming hotel in Washington, D.C.,” Andrés said in a statement. “More than half of my team is Hispanic, as are many of our guests. And, as a proud Spanish immigrant and recently naturalized American citizen myself, I believe that every human being deserves respect, regardless of immigration status.”

Trump responded with a $10 million breach of contract lawsuit that is still pending.

The challenge of making the new Trump Hotel in Washington a success will fall on the shoulders of Damelincourt, a French immigrant who says that he’s proud to be part of the Trump International brand, which, he says, employs people from at least 35 countries around the world.

“We have people working with us from every part of the world, people of every race and sexual orientation,” he said. “Mr. Trump has been extremely good to us.”

Damelincourt couldn’t comment on the breach-of-contract lawsuit but said they are now exploring different options with other chefs and insisted that the hotel will have a gourmet restaurant befitting a five-star hotel.

Damelincourt’s own immigrant story began more than 15 years ago, when he fell in love with an American woman who was studying abroad in Paris.

“She was a student at Tulane, and I came to visit her on a two-week trip in 2000,” he recalled. “But I never went back to France.”

He found a job at Le Méridien hotel in New Orleans, married his American girlfriend, Carolyn, and launched a career in the hotel industry that has taken him all over North America. In his last two jobs with the Trump brand, he’s elevated their properties in Chicago and Toronto to five-star, five-diamond ratings, along with other awards and accolades. 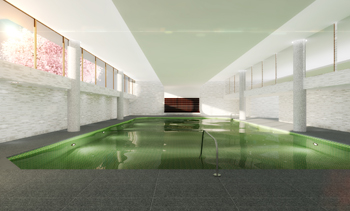 A pool will be among the features of the new Watergate Hotel, set to open next year.

Damelincourt says that anything less than the same result in Washington will be a disappointment. He believes the hotel will be a huge hit with diplomats because it will have an entrance on 11th Street, just off Pennsylvania Avenue, that is closed off to traffic and ideal for arriving delegations. And for those countries who can splash out for visiting VIPs, the hotel’s suites will be a show in and of themselves. The hotel’s largest suite, still unnamed at the moment, will be a two-level, two-bedroom, three-bath, 6,000-square-foot palace with stunning views of the city. Damelincourt says that the cost of this suite will likely start at about $20,000 per night, rising to perhaps as much as $100,000 per night for the 2017 inauguration — especially if a certain mogul captures the White House next year.

Meanwhile, renovation work on the storied Watergate — expected to reopen in late 2016 after closing its doors in 2007 — has faced its own challenges. In May, a large section of the garage collapsed at the complex, causing minor injuries to two construction workers and some damage. But construction work resumed quickly and the incident is unlikely to set back the $125 million renovation, which includes a complete remodel of the hotel’s interior, a new 7,000-square-foot ballroom, a rooftop lounge with panoramic views, a whiskey bar and a cigar lounge.

The new and improved Watergate will have 337 guestrooms — half with balconies and 95 percent of them with views of the Potomac River. Euro Capital Properties, the hotel’s parent company, says that guestrooms will feature plush bedding, floor-to-ceiling marble bathrooms and instructions for an innovative smart-phone application that allows guests to “control virtually every aspect of their stay.” A world-class spa will feature eight treatment rooms, sauna and steam baths, an indoor swimming pool, a whirlpool and yoga and fitness classes.

The Watergate’s three-bedroom presidential suites measure 2,700 square feet and include two private balconies with views of the Potomac. At $12,000 per night, they will also have two separate living rooms, a full kitchen with marble countertops, gas fireplace, a walk-in shower with body sprayers and double vanities with in-mirror-televisions. (Standard guestrooms will start at $400 per night. U.S. government per diem is available based upon availability at both the Watergate and Trump International.)

Can Washington support two more super luxury hotels? According to data provided to The Diplomat by STR Global, which tracks data on the hotel industry, it looks like there’s plenty of room for more competition in the local luxury hotel market. Through July 2015, occupancy this year at luxury hotels in D.C. was 76 percent, with an average room rate of $296, compared to $286 in 2013, $273 in 2011 and just $260 in 2009. Since 2009, the number of luxury hotels has climbed from 20 to 25, according to STR’s analysis.

“These are very, very healthy numbers that bode well for how these hotels are likely to fare in this market,” said Jan D. Freitag, a hotel industry analyst at STR. “Luxury has been performing very well around the country since the Great Recession, probably because there were so few new luxury properties being built.”

Freitag said that while the super high-end suites at luxury hotels may attract some affluent customers, particularly from oil-rich nations, they also function as great PR, because who isn’t interested in $100,000 hotel suites and other examples of extravagantly conspicuous consumption?

Freitag believes that what sets luxury hotels apart these days is not just the guestrooms, but rather the experience they provide to their guests. He cited two examples: the Belmond Copacabana Palace, which offers a sunrise picnic breakfast at the famed Christ the Redeemer statue in Rio de Janeiro before it opens to the public, and the “red-carpet-ready” treatment at the Peninsula Hotel in Beverly Hills, where stylists “bring out guests’ inner star” by doing their hair and makeup, providing fancy loaner jewels and then sending an award-winning photographer to snap shots of them on a red carpet in front of the hotel’s Rolls Royce.

“High-end travelers want these kinds of special experiences,” Freitag said. “They’re supposed to be the kind of experiences money can’t buy, but of course the truth is, it can.”