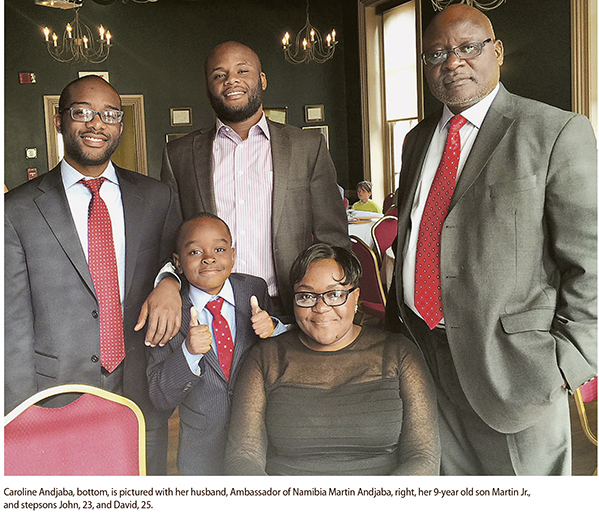 Last September, during a meeting with African leaders at the United Nations General Assembly, “President Trump came up with a new African country,” smiled Caroline Andjaba, wife of Namibian Ambassador Martin Andjaba. “He called us ‘Nambia’ and we’ve been getting all sorts of attention and press ever since.”

Officials largely did not comment on the president’s snafu, in which he likely mixed up Zambia and Namibia in talking about the latter’s revamped health care system, although some lamented that the gaffe reflected Trump’s general lack of interest in Africa. On Twitter, however, some Namibians expressed optimism that Westerners might learn more about their sparsely populated country of just 2 million off the coast of southwestern Africa.

Caroline Andjaba said that Namibians cherish their independence, which they formally gained from South Africa in 1990 after a long fight. In the late 19th century, Germans colonized the land, but after World War I, South Africa took de facto control of the country, where an armed struggle for independence culminated in an end to the occupation in 1988.

Since then, Namibia has navigated the transition from white apartheid minority rule to parliamentary democracy, with elections held regularly. “We are very peaceful. We want partnerships, not aid,” Andjaba said, noting that Cuba helped Namibia achieve its independence.

Mining is critical to the country’s economy, known for its large output of diamonds, uranium and other minerals. Agriculture, fishing, manufacturing and tourism are other key sectors. Namibia has also been named a top emerging market economy in Africa and is classified as an upper middle income country by the World Bank. But widespread poverty and inequality remain persistent problems — a legacy of the apartheid system — despite generous spending on social programs.

To address some of those problems, in 2016 Caroline Andjaba founded Lift Up! Namibia, a D.C-registered nonprofit created to mobilize support for educational facilities in Namibia and help her country respond to natural disasters. Among its programs, it provides school supplies, computers, tutoring and transportation; renovates and constructs schools; establishes community centers and libraries; and offers emergency services such as food, water, sanitation, temporary shelter, hygiene kits, medicine, mosquito nets and repellants.

“I can’t accept the status quo,” she told us. “I want some positive change.”

She likes to keep busy. From March 2013 to March 2015, she served as president of the Spouses of African Ambassadors in D.C. She currently is president of the Diplomatic Spouses of the Southern African Development Community (SADC), a 15-member grouping of states working to improve security and development and alleviate poverty in the region.

In 2014, Andjaba graduated from the University of the District of Columbia (UDC) with an associate’s degree in liberal arts and is currently a third-year student pursuing a law degree at the University of South Africa.

“I find D.C. fascinating. I knew it would be interesting. First, I had to decide what role I would play. I checked with the other ladies,” she said. “I decided on a supportive role. I want others to be able to look back and say, ‘Oh, thank God, Caroline was here and that’s what she did.”

In the meantime, she oversees their 9-year old son Martin Jr. who attends Seven Locks Elementary. “He’s naughty, likes to play and loves gadgets. He asked to stay home from school today to join me in this interview,” she said. Instead, he left a response for us to the question of what it’s like to be an ambassador’s son. “It feels good to be an ambassador’s son,” he said, “because I get to meet [Namibian] President Hage Geingob and his family when they visit, and I get to tour the White House for Christmas.”

“The other two boys are my husband’s children from another marriage,” Andjaba explained. “John, 23, is at Purdue working toward his Ph.D. in chemistry. David, 25, is studying for his master’s in architecture at UDC. He lives at home. The two older boys are good boys and have been with us since 2011 when they were teenagers,” she said. “My husband’s daughter, Monica, is the oldest at 28 and is not with us.” 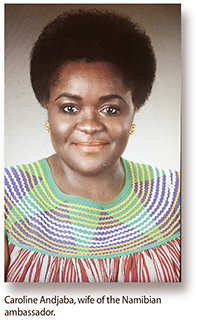 Before coming to Washington, Caroline worked in Namibia’s Social Security Commission from 1996 to 2011. “In fact, that’s how I met my husband. He needed some help with his Social Security and a friend of his told him to call me. He has a beautiful voice. Finally, we put our voices to our faces and got together. I wasn’t looking for a relationship; I was only 19 … who ever thought I’d be here in Washington as an ambassador’s wife?”

The ambassador came to Washington in August 2010 and she arrived in 2011. Earlier, he had represented his country at the United Nations for 10 years, where he served two stints as president of the U.N. Security Council and led a delegation to East Timor. Prior to that, he worked at the Department of Foreign Affairs of SWAPO (South West Africa People’s Organization), the party that sought Namibian independence from South Africa.

“He had started his career as a military man. At 17, he went into exile to fight on the frontline for the liberation struggle. He was a trained soldier. My husband and I are part of Namibia’s biggest tribe, the Aawambo,” Andjaba said.

“In 1990, my husband was chief of protocol for six years under our first president, Sam Nujoma, and spent four years as a cabinet member of multilateral issues. He doesn’t boast. He’s very disciplined and likeable. He doesn’t compromise on principles…. I never heard of anyone who didn’t like him,” she said.

“The soldier in him is still there,” she added. “He doesn’t like to see clutter. His side of the bedroom is so clean and neat, his clothes all folded, his shoes put away. I don’t ever have to clean up after him.”

Andjaba also described herself as a strict mother. “My mother was a nurse and my father was a prison warden and a part-time Anglican pastor. Sometimes he would bring inmates to our house. They were often in prison rehab or manual labor. Now since he is retired from the prison job, he is a full-time pastor. I have seven siblings. Only two of us are girls. I am the second-born in the family.”

Andjaba said there are many cultural differences between her country and the U.S. For example, until relatively recently, it was common for teachers to hit students on the hands with a ruler. “Constitutionally, that is not allowed any more. After independence, there was no corporal punishment,” she noted.

Climate-wise, the two countries are also vastly different. The country’s Namib desert directly meets the waves of the South Atlantic Ocean. “Our desert is the oldest desert in the world. We have beautiful red sand dunes,” she said.

“The country is very dry and arid. Namibia’s sparse and erratic rainfall often leads to drought. There is yearly flooding in the north and northeast. In 2017, 102 government schools were forced to close due to floods; 270,000 students were stranded.”

But she adds that her country’s warm weather is soothing. “During warm weather, you can sit under a tree. There is always a breeze and no humidity. We enjoy being outside and watching kids play in the street. There are no TVs. We played a lot of sports. Netball was our favorite.”

Despite the differences between Namibia and the U.S., the current racial and divisions here and concerns about Trump’s attitude toward Africa, Andjaba has no complaints.

“The ordinary American is a very good person. No matter what color, they are all the same. I’ve grown here and I still have plenty to learn. You depend on your nuclear family like ours here — mother and father and children. We grow up differently in Namibia and embrace our extended family fully.

“If I had my way, I would wish for everybody to live an equal life. What is there to life but living a dignified life?”