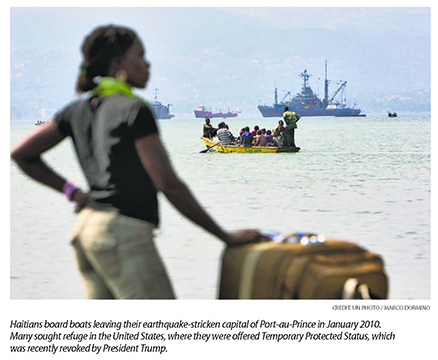 Bananas, coffee, apparel manufacturing and tourism all generate significant foreign exchange for Haiti, El Salvador, Honduras and Nicaragua. But one of the biggest sources of income for these four countries has nothing to do with producing exports or providing services.

The Inter-American Dialogue, in an extensive report issued Jan. 24, details the likely consequences of an end to TPS for each of the countries affected.

The irony is that family remittances to Latin America and the Caribbean grew by over 8 percent from 2016 to 2017, exceeding $75 billion. This increase far exceeds the World Bank’s estimated 1.2 percent GDP growth.

In absolute numbers, the top recipient of remittances last year was Mexico, with $28.6 billion. But that accounts for just 2.7 percent of the Mexican economy. By contrast, family remittances make up 10.2 percent of Nicaraguan GDP, 19.5 percent of Honduran GDP and 33.6 percent of Haitian GDP.

“Every dollar counts in an economy that basically lives off migrants,” said Manuel Orozco, director of the Migration, Remittances and Development Program at the Inter-American Dialogue and author of the report. “One out of every three dollars comes from remittances, and you have a state that is nearly collapsing, with very little productive capacity outside of tourism or the free trade zones.”

“You’re talking about the loss of income in 40,000 households. If they were to return, it would be devastating,” Orozco told The Diplomat in a phone interview. “They’ve been outside of Haiti for years. They have no idea what the place looks like, and they have families here and have made lives here. So returning is not an option. And by changing their status from legal to undocumented means they’ll make 20 to 25 percent less, and they’ll lose insurance rights.”

This, he said, is why “most people on TPS probably won’t return to their countries — and in the case of Haitians, many have been going to Canada looking for asylum or refugee status. That might set a trend to move to other countries, which in itself is unsettling.”

El Salvador was originally granted TPS in 2001 following two major earthquakes. The George W. Bush and Barack Obama administrations extended TPS for El Salvadorans several times, but the Trump administration said the original conditions under which TPS was granted in 2001 no longer exist. Critics counter, however, that these immigrants have planted deep roots in the U.S. and that El Salvador continues to be wracked by crime, drug violence and poverty — conditions that will ironically worsen if these TPS holders, who send significant funds to prop up their nation’s economy, return home.

“While for the most part migrants continue to remit like they did in previous years, their remitting behavior is now hampered by greater fears of deportation amid concerns about a remittance tax,” said Orozco, whose team surveyed 500 migrants in New York, Washington, Chicago, Houston and Los Angeles between March and August 2017. Among other things, the survey revealed that:

Orozco, a native of Nicaragua, said that “in some countries like El Salvador, Honduras and Guatemala, remittances may be responsible for half of overall economic growth. Their increase in 2017 amounted to 50 to 78 percent of total growth in these three countries.”

El Salvador’s predicament is particularly cruel. In a just-released report, “Towards an Adjustment of Status for Salvadorans with TPS,” Orozco argues that providing legal permanent residency for these people is a “logical, humane and politically important and defensible” step.

“For 18 consecutive years, four administrations continued the TPS designation for Salvadorans. As a result of these extensions of TPS, Salvadorans have gradually set down roots in the United States,” he wrote. “Although they arrived with so-called temporary status, 18 years is a long time for anything to be temporary. Seeing the way that over 200,000 Salvadorans with TPS have built lives for themselves over the past two decades is a testament to their hard work and their commitment to core American values. Their time in the United States indicates that they have appreciated and taken advantage of the opportunities presented to them by TPS, and in doing so have fully integrated into American society.”

Among other things, the Salvadorans currently protected under TPS are for the most part hardworking and law-abiding. Nine out of 10 Salvadorans under TPS are in the labor force, and only 5 percent are unemployed.

Orozco argues that Salvadorans with TPS have “higher employment rates among women and higher earnings among men” and are firmly established in the American middle class, with median household incomes of $50,000 a year.

In addition, he said, 78 percent have a U.S. bank account (compared to 40 percent of undocumented migrants), while 36 percent have a home mortgage. “They are neither a burden nor financially vulnerable,” he concluded.

But ending TPS is going to particularly hurt cities with large Salvadoran immigrant populations, such as Los Angeles and Washington, D.C.

“As the U.S. economy continues to show steady growth, with unemployment at 4 percent, the disruption caused by a loss of 195,000 workers in the labor force would be significant,” he said. “Given the fact that Salvadoran TPS beneficiaries work in economic sectors different than those of native-born U.S. citizens, the loss of jobs will affect performance in construction and other services.”

Finally, says the report, ending TPS will be a “major blow” to El Salvador’s struggling economy, which has been weakened by natural disasters, gang violence and the drug trade.

“The return of Salvadorans with TPS would have dramatic impacts on the labor market of a country that is already economically fragile,” the report concluded. “El Salvador is a small country, with an estimated 4 million people in the labor market, and the return of some 230,000 workers amounts to nearly 6 percent of the labor force. Whether Salvadorans with TPS will be able to find jobs upon their return, or whether the jobs they find will displace other workers, remain troubling questions.”