Home The Washington Diplomat March 2018 On International Women’s Day, Strides Have Been Made but Equality Gaps Persist 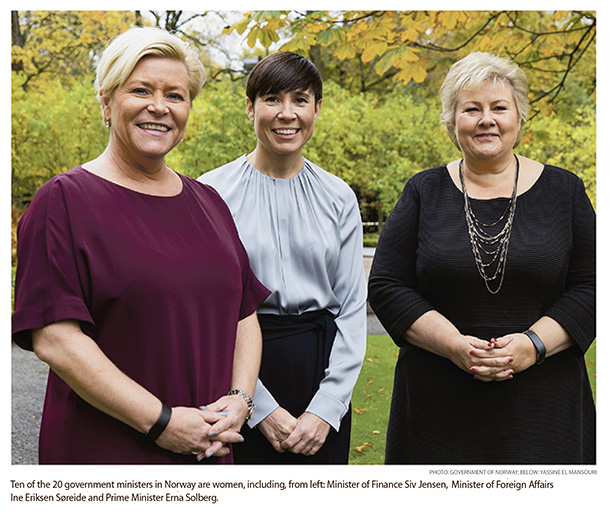 On March 8 we celebrate International Women’s Day, highlighting the rights of women and girls all over the world.

The #MeToo campaign is a forceful reminder of the importance of one of the many aspects of such rights. Other reminders include the increased participation of women in the workforce — and in politics.

Roughly until my childhood in the 1960s, few married women in Norway worked outside the home. That would change quickly with the introduction of time-saving household appliances and improved access to daycare.

Back then, it was also not common for women to enter politics. The share of women in the Norwegian Parliament stayed below 10 percent until 1973.

Change, once underway, happened quickly on both fronts. Previously seen as unsuitable for married women or an inevitable part of life for poor folks, work outside of the home soon came to symbolize women’s freedom and independence.

Women’s share of the workforce rose quickly. In Norway today there are nearly as many women as men working outside the home. In politics, the share of women in parliament quadrupled between 1973 and 1993, to nearly 40 percent.

Over the past few decades, all Western countries have seen an increase in women’s participation both in the workforce and in politics. In some countries, however, the trend has recently slowed, or even reversed.

This is unfortunate, not only for the women themselves, but also for society. Equal participation and equal opportunity isn’t only about justice; it’s about common sense. The benefits to the country are tangible, economically as well as socially and culturally.

Ten of the 20 government ministers in Norway are women, including the prime minister, foreign minister and minister of finance. When Prime Minister Erna Solberg recently visited Washington, D.C., she was asked by Ari Shapiro of NPR’s “All Things Considered” what difference it makes to have women in leadership roles. 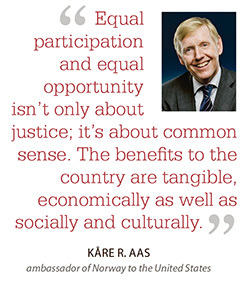 Solberg said that several decades of women’s participation in Norwegian politics have provided a broad recruitment base for the top positions in government. She also talked about the importance of managing the work-family balance, and the need for families to have support networks so women don’t have to choose between a career and motherhood.

So which measures and policies most effectively increase the share of women in the workforce?

Norway’s experience is that paid parental leave, access to affordable childcare, favorable tax policies and employer-led initiatives such as workplace flexibility are at the top of the list.

Role models are also important. Research has found that female leadership has a powerful and inspirational effect: Girls set higher educational goals for themselves when they live in areas that have long-serving female leaders.

These are all areas that require strategic thinking and political will at the highest levels.

Non-politicians can make important contributions, too. Last year Norway’s soccer association and the country’s international players signed a historic agreement, which secured equal pay for the men and women representing Norway in international soccer. The male athletes committed to making a financial contribution to the lower-paid women’s team to make up the difference.

Through the U.N.’s Sustainable Development Goals, leaders from all over the world have committed to promote gender equality and empower all women and girls. We know from experience that having more women in the workforce leads to increased economic growth, something that is much needed in many economies.

The Norwegian government takes this commitment seriously. That is why, in our international development efforts, we are keeping a special focus on equal access to education — an important booster for equality.

Much has been achieved on gender equality during my lifetime. International Women’s Day is, however, not a time to rest on our laurels. Instead, we should focus on the gaps that remain. There’s unfinished business with regard to equal access, equal participation, and equal pay.

Happy celebrations on March 8. Personally, I’m looking forward to hosting hundreds of enthusiastic guests at my residence in the nation’s capital that evening, in celebration of International Women’s Day.