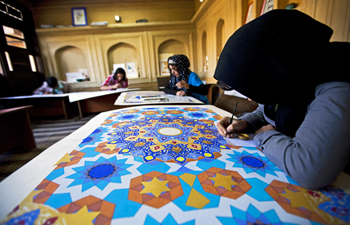 Part of the mission of Turquoise Mountain, a British NGO, is to provide a sustainable source of income for Afghanistan’s young women.

We are used to seeing war measured by the number of body bags, the trails of the displaced, and the screams of men, women and children. Another casualty of war, less mentioned but with arguably comparable impact, is the loss of an embattled country’s cultural capital and heritage. “Turquoise Mountain: Artists Transforming Afghanistan” at the Arthur M. Sackler Gallery reflects the cultural beauty that can be salvaged from decades of violence and loss.

In preparation for the exhibition’s opening on March 5, the Smithsonian’s International Gallery was transformed into a diorama of a Kabul marketplace to showcase the unique artistic culture of Afghanistan — one that was shaped by the country’s ancient geographic position at the crossroads of influences from India, Persia and Central Asia.

The reinvented space triggers a multisensory, immersive experience. Video projections, large-scale photographs and models featuring traditional Afghan artisan crafts — including jewelry making, woodworking, calligraphy, carpet weaving and ceramics — come together to tell the story of Murad Khani, a part of Kabul’s Old City that was once known for its rich cultural heritage. Turquoise Mountain, a British NGO founded in 2006 at the request of Prince Charles and then Afghan President Hamid Karzai, transformed the war-ridden area from a virtual landfill into a thriving cultural and economic hub that locals were able to look at with pride again.

“The side of Afghanistan we show is one of rich human diversity — of beauty, creativity, resilience, humor, mutual support and respect,” said Tommy Wide, director of exhibitions at Turquoise Mountain. “We do that through showing the beautiful things that Afghans make, how those things are made, who makes them and why. We don’t pretend that Afghanistan doesn’t face many wrenching problems, but we do want to illustrate the richness and range of cultural resources at Afghans’ disposal, through which Afghans make sense, and beauty, out of their lives.” 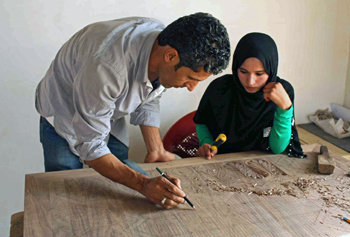 Nasser Mansouri, who fled Afghanistan at the age of 11 following the Soviet invasion, returned in 2006 as a woodwork master.

In its mission to revitalize Murad Khani, the Turquoise Mountain team quickly got to work removing 30,000 cubic meters of accumulated garbage that had earned the district its place on the World Monuments Fund Watch List of most endangered sites. They also rebuilt or restored more than 100 historic and local community buildings through traditional earth construction processes, along with restoring water, electricity and sanitation throughout Murad Khani. In addition, Turquoise Mountain opened a primary school, a medical clinic that serves 18,000 patients a year and the country’s premier institution for vocational arts training.

“The projects we do … focus on Afghanistan’s time-honored artistic legacies [and] are very much with the grain of Afghan society,” Wide said when asked if Turquoise Mountain has received any backlash from the Afghan community. “[The projects] are not seen as ‘foreign’ imports forced upon a local population, but rather the revival or continuation of long-held practices. I think this has helped make it relatively uncontroversial amongst Afghans.”

When The Washington Diplomat visited the exhibition, Wide was sitting at a table next to Sughra Hussainy, the first Turquoise Mountain artisan among 17 who will be visiting D.C. to showcase their craft techniques alongside the exhibition. While Wide welcomed visitors — including many Afghan-Americans whom he spoke to in fluent Dari and Pashto — Hussainy demonstrated her calligraphy prowess. She smiled widely while explaining that she made all the raw material she was using, including papers, pigments and brushes made of cat hair.

Turquoise Mountain woodworkers often incorporate traditional styles and techniques, such as “jali” latticework and “nuristani” carving, into contemporary pieces for everyday use.

In addition to Hussainy’s calligraphy, other featured work in the Turquoise Mountain exhibition includes stunning woodwork that smells as wonderful as it looks. Carved in a traditional style, slivers of wood are held together without any nails to form various geometric patterns, which are enhanced by the interplay of light shining through them. In the jewelry-making section, text panels tell the story of one deaf Turquoise Mountain artisan who draws her inspiration from the rain, evidenced in the earrings she creates in the shape of water droplets.

Another section features gorgeous Afghan rugs that were created specifically for the exhibition, highlighting how their colors are developed. Afghanistan is one of the last countries where carpets are made completely by hand with natural materials for dyes, including mallow for purple shades, madder roots for red and dried wildflowers for yellow hues.

In front of the rugs, in the center of the exhibition space, is a caravanserai where visitors can sit for a moment and absorb the art. Traditionally, this was a structure used as a gathering and resting place for travelers who traded along the fabled Silk Road. The courtyard was recreated with more than three tons of hand-carved Himalayan cedar and is complemented by colorful, soft cushions that visitors can sit on while using the iPads provided by the museum to learn more about Turquoise Mountain and Afghan crafts.

“This exhibition highlights the vitality of these new Afghan artisans and demonstrates the power of art and culture to tell the story of artistic creativity, resilience and hope,” said Julian Raby, the Dame Jillian Sackler director of the Sackler and Freer Gallery of Art. “This is a powerful moment meant to transcend the headlines of war and conflict.”