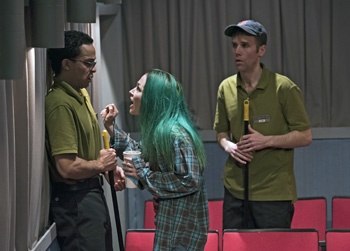 Watching “The Flick,” currently at Signature Theatre, is akin to experiencing the peaks and valleys of a love-hate relationship. The same factors that draw you to it are the very features that repel you.

It’s like being attracted to someone’s blatant honesty and then wishing he’d keep his opinions to himself. Or like rejoicing in someone’s spontaneity and, after time, deeming her whims utterly irresponsible.

Annie Baker’s script, for which she won the 2014 Pulitzer Prize for drama, has been described by the New York Times as “wondrous” and also “a work of art so strange and fresh that it definitely freaks people out.” It is hard to watch, and yet difficult not to. It is a daring exploration of awkward, at-times forced, relationships that are intriguing to witness for voyeuristic reasons, but painful to digest, because observing gives us more than we want to know. Or, as the play’s millennial characters would say, TMI (too much information).

The play’s premise is that we (the audience) are flies on the wall to what goes on behind the scenes for employees at a rundown movie theater. James Kronzer’s crafty set design has us staring at the back of a cramped, dilapidated theater in Massachusetts. In it are rows of red cushioned seats, recessed lighting, water stains on the tiled ceiling and a lit booth above that holds one of the state’s last 35-millimeter film projectors. The two male janitors’ and one female projectionist’s dreary minimum-wage world is our own, without an escape hatch. The set never changes, although it is sometimes vacant of characters, at which time the audience is compelled to stare at it in anticipation.

We witness Sam, Avery and Rose — all misfits in their own way — come to work every day and try to maintain their dignity as they mop up spilled, sticky soda, wash off poop smeared on a bathroom wall, fight over promotions that never materialize and secretly siphon off pocket change from the owner’s earnings. We are privy to these two socially uneasy men and one brazen, sexually charged young woman who all dare to form trusting bonds with one another that far exceed what’s required for their jobs. We get a glimpse of what their lives must be like outside of work as they struggle with societal problems like classism and racism.

The play is purposefully unnerving, both for the characters and its voyeurs (the audience). This is because of its oddball characters and grimy setting, but also because of the play’s unusual cadence. Baker has peppered the dialogue with an abundance of pregnant pauses. This makes it realistic, but as the play fills up almost three and a half hours, one wonders if there can be too much realism in what is, in fact, fiction. 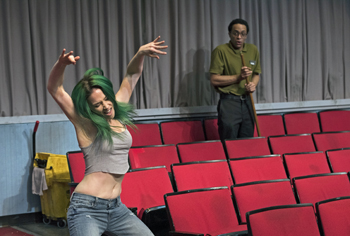 Regrettably, the pauses in action, small cast and spurts when no one is on stage have the effect, at times, of heightening the production’s imperfections, no matter their size.

For example, Thaddeus McCants, who plays the agonizingly shy and insecure custodian trainee Avery, overplays his germ-phobic character’s social and physical clumsiness from the start, which grates against the script’s refrain of ultra-realism. McCants overwhelmingly redeems himself by the end of Act II, but his recovery is a long time coming. Evan Casey, who plays the theater’s veteran janitor Sam, also portrays an extreme personality, but his performance is more forgiving, possibly because he’s recognizable as the caricatured reticent Bostonian.

Still, it’s hard not to invest in these characters, no matter how uncomfortable it is to identify with their ineptitude.

When Avery ironically asks Sam, “What do you want to be when you grow up?” Sam replies, “I’m already grown up. That’s the most depressing thing anyone’s ever said to me.” There is nothing to do with this except both laugh and cringe.

The stand-out performance that gels the action is that of Laura C. Harris, who portrays wild, self-destructive Rose. Her character has an advantage in that she’s the only female — an unusually bold one — playing against the boys’ timidity. But Harris should be given much credit here for making her youthful self-absorption completely organic and natural — and, yes, realistic. She thrashes about the stage, speaking and acting before she thinks, but with a ferocious authenticity that is hard not to admire. Her relation to the boys adds ammunition to the script that eventually climaxes. 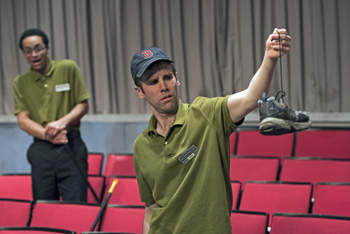 On top of all the societal tensions among these characters is their intense relationship with the movies, which provides needed comedy. Sam and Avery devise a “Six Degrees of Separation” riddle game, which tests their vast knowledge of movie stars and film scripts, while Rose prides herself on her knowledge of how to play film reels on an obsolete machine.

The script also plays around with the theme of what is real and what isn’t. The films they love so much are fiction, yet the livelihoods that are dependent on them are unfortunately not ideal, and all too real. Even their discussion of films going digital revolves around which art form is more realistic — frames or pixels?

“I’m always faking it; everyone’s a stereotype,” muses Avery to Rose, who starts to realize that her public persona is merely a tough-guy act hiding a more vulnerable and authentic personality.

Ultimately, mixing the philosophical with the mundane is Baker’s signature talent, and this play’s appeal.