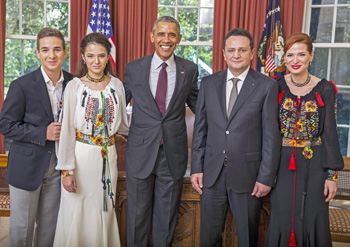 As a college student at the George Washington University, George Cristian Maior developed an affinity for football and rooted for the hometown team, the Redskins. Now, during his first posting as ambassador, Maior and his wife Anamaria tout the affinity that their countrymen have for the United States.

“We have had a relationship with the United States for 135 years. And, even more, we now have a strong strategic partnership,” said Romania’s new envoy, who presented his credentials to the White House last September.

Romanian Ambassador George Cristian Maior, second from right, is joined by his wife Anamaria, son Cristian and daughter Lara as he presents his credentials to President Obama at the White House last September.

Romania’s 20 million inhabitants have been members of NATO since 2004 and the European Union since 2007. Maior, the former director of the Romanian Intelligence Service, says his country is one of the most pro-American in the EU. “Eighty percent of Romanians think that America is our best friend. Our soldiers participate in Afghanistan, making us one of the largest contributors. A Romanian commander led U.S. troops.”

Maior and his wife were both born in Cluj-Napoca, the unofficial capital of the Transylvania region that is known for its history and culture. “We always felt part of Europe,” Anamaria told us, “especially from the cultural point of view.”

“Cluj is a vibrant city with important architecture and an 18th-century university,” said Anamaria, who is the daughter of Augustin Buzura, a respected novelist whose works have been translated worldwide. Buzura headed the Romanian Cultural Foundation (renamed the Romanian Cultural Institute) and promoted Romanian culture abroad, a lifelong pursuit of Anamaria’s as well.

Anamaria followed her passion for the written word inherited from her father by majoring in philology (the study of languages) at Babeș-Bolyai University in her hometown.

Anamaria and her husband met in Cluj, where they were introduced by friends. They married when Maior became Romania’s deputy chief of mission in Ireland in 1997.

“We established the embassy in Dublin,” Maior said.

“And I started to organize cultural events for the embassy,” his wife added. “I was very impressed with the Irish. Although they were more reserved, they were very warm when you got to know them.”

While they were posted in Ireland, she received a master’s of philosophy degree in international peace studies from Trinity College in Dublin. Anamaria also worked with Irish poet Aodh O Canainn to publish famed Romanian writer Marin Sorescu’s final work, “Poems of the End.”

After two years in Ireland, they returned to Romania, where in 2000 Maior became state secretary and head of the Department for Euro-Atlantic Integration and Defense Policy in the Ministry of National Defense. In that role, he was responsible for coordinating the strategic and military dimension of Romania’s NATO accession process. Anamaria, meanwhile, cared for their two small children and later became a senior consultant for the global insurance company MetLife.

Now, she is helping the family settle in and adjust to life in Washington. “I am not alone; I have help with the children. My mother lives with us. Lara is a ninth-grader and Cristian is a seventh-grader. The both go to public schools. I still help with their homework, especially English,” she said. “It’s not easy for them.

“My most important job is the family. I am often waiting for the kids and my husband, who works very long hours. We love to explore Washington together — the monuments and museums,” Anamaria said.

“We traveled here five years ago when the children were younger,” she added. “It was summertime and we went to Utah and the West Coast. The American people were lovely — very kind and open and helpful with whatever we needed.”

The ambassador has deep ties to the United States. Before he met his wife, he came to D.C. as a graduate student studying international and comparative law at the George Washington University. 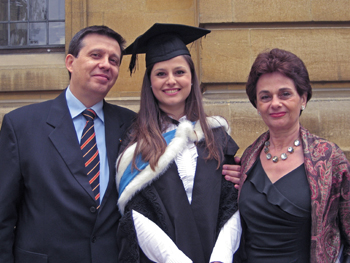 Anamaria Maior and her husband George Cristian Maior are pictured with their daughter Lara.

“I lived in a Foggy Bottom apartment with other students. We had to cook for ourselves,” he recalled. At that point, his wife smiled and noted that he is a good cook, especially with Chinese and Romanian cuisine. “We worked hard and discovered friends and I learned about American culture,” he continued. “That was the year the Redskins won the Super Bowl. It was a fantastic atmosphere. I have wonderful memories. Washington is close to my heart and I have come here many times since.

“I am in touch with my friends from university here and we often get together with them,” he added. “I like Georgetown and the small pubs.”

The ambassador went on to get a Ph.D. in international law from Babeș-Bolyai University in Cluj. He also worked as a university professor and Ph.D. coordinator at Bucharest’s National School of Political Studies and Public Administration. “I enjoy being with students, writing. Academic life is part of my identity,” said Maior, who has published various articles and books covering human rights, public law, international relations, strategic thinking, security and intelligence studies.

In addition to his university work, Maior has served in a number of government posts based in Bucharest, including senator to the Romanian Parliament and, most recently, director of the Romanian Intelligence Service, which he helmed for eight years.

“Diplomacy is a very noble profession,” he said, comparing academic and political life to that of the Foreign Service. “I really like diplomacy as a form of linking societies and countries.”

And one of his primary duties in Washington will be improving bilateral economic ties. Maior noted that $3 billion has been invested in his country’s burgeoning IT sector. “Ford and Exxon are already there, as is Microsoft. One of the mandates for this ambassador in Washington is to increase trade, especially American investments. There is great potential,” he said.

On the security front, Russia poses a thorny challenge. Maior said Russian meddling in Ukraine continues to be a major concern for the region. “It is a threat to our region. It is very worrisome, especially for some other countries like Poland or the Baltics.”

On a lighter note, Maior and his wife also enjoy teaching Americans about the history and natural beauty of their homeland, especially the fabled Transylvania region in the Carpathian Mountains. Transylvania is not only where their hometown of Cluj is located, it is also the storied backdrop for “Dracula,” the 1897 Gothic horror novel penned by Irish author Bram Stoker. The vampire myth was inspired by the real-life ruler Vlad Dracula, posthumously dubbed Vlad the Impaler for his murderous exploits.

While the area is perhaps best known for its bloodthirsty lore, today Transylvania — with its cobblestone streets, charming villages and lush natural scenery — is a popular tourist haunt. The area is also known as a favorite summertime spot for a different prince — Britain’s Prince Charles, who is reportedly a distant descendent of Prince Vlad. The British monarch has two Saxon cottages in the pastoral villages of Viscri and Zalanpatak. He has also created a foundation to help preserve the heritage and traditions of this picturesque slice of Romanian life.