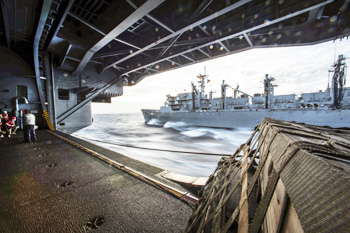 As our foreign policy and national security efforts execute President Obama’s well-publicized “pivot to Asia,” force, diplomacy and politics in the Pacific have been at the forefront of the discussion. I wholeheartedly support Senate ratification of the United Nations Convention on the Law of the Sea (UNCLOS), which is a critical piece of our focus on the Pacific.

The USS John C. Stennis pulls up next to the fast combat support ship USNS Rainier during a replenishment in the South China Sea on March 4, 2016. The Stennis provides a ready force to support security and stability in the Indo-Asia-Pacific region.

UNCLOS defines the rights and responsibilities of nations with respect to their use of the world’s oceans, establishing guidelines for everything from deep-sea mining to control over a country’s coastal waters, including a 200-mile “exclusive economic zone.” Over 160 nations have ratified the document, but the Senate has refused to approve the treaty for over 30 years, mostly due to conservative fears that UNCLOS would infringe on national sovereignty.

This treaty, however, is of paramount importance to American national security interests and our political and economic interests in Asia as well. It offers the legitimacy of the rule of law to our actions, especially in areas that are contested. As retired Coast Guard Adm. Robert Papp succinctly stated, “Our legitimacy as a sovereign state and as a world leader … rests with the rule of law.”

By signing UNCLOS, America will signify its position as a country that values, respects and upholds a rules-based international order. It reinforces our stance that a “force of arms should not be our only national security instrument” (to quote retired Army Gen. Martin Dempsey). It illustrates that we are willing to sit at the same table with our allies and those with whom we may disagree. It gives a mechanism beyond force to settle differences between sovereign states without infringing on sovereignty itself.

More importantly, ratifying UNCLOS bolsters American legitimacy in international maritime affairs beyond what our unparalleled armed forces are able to secure. The U.S. Navy and our commercial partners have long adhered to the spirit and framework of UNCLOS, while simultaneously expecting other seafaring nations to do the same. Treaty law remains the strongest, binding legal foundation on which global politics and the international order rest.

The U.S. has instead been operating under customary international law, which is easily undermined by the unilateral action of states. It should come as no surprise then that our allies are confused by our refusal to ratify a treaty that upholds a rules-based approach to maritime conflict while expecting other nations to be bound by those same rules. As Navy Adm. Harry B. Harris Jr., commander of the U.S. Pacific Command, said at a Feb. 24 House Armed Services Committee hearing on the Pacific theater, “I think that in the 21st century our moral standing is affected by the fact that we are not a signatory to UNCLOS.” As the world’s preeminent maritime power and the foremost champion of the rule of law, this reluctance to join UNCLOS undermines American economic and security interests.

Ratifying UNCLOS will afford the U.S. a stronger position when critical maritime decisions are being debated and negotiated — such as the various territorial disputes between China and its neighbors. To quote my fellow Armed Services member Rep. Joe Courtney (D-Conn.), who said at the same House hearing: “[W]e’re allowing litigation to proceed where the consequences in terms of military strategy and resources of this country in the Asia Pacific could hinge on the outcome of that claim and we’re completely shut out…. We’ve done this to ourselves.”

My colleague is exactly right. We have shut ourselves out of an international rule of law-based process that the U.S. military upholds around the world — a process that reinforces diplomacy and ensures the freedom of navigation we so passionately defend across the globe. The fact that substantial amendments were made to the treaty in 1994 — at the behest of the United States and which immediately addressed American reservations — underscores how important it is for the U.S. to be a party to the international process of maritime dispute resolution, rather than being limited to observer status. It’s better to be a part of the conversation and at the table than to be sitting outside waiting in line. 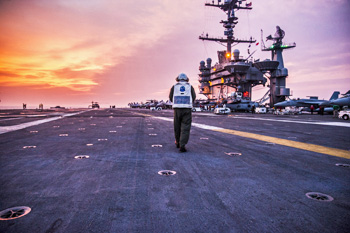 U.S. Navy Capt. Greg Fenton, commanding officer of the U.S. Navy’s aircraft carrier USS George Washington, walks across the ship’s flight deck after operations in the South China Sea on June 14, 2014. George Washington provides a combat- ready force that defends the collective maritime interests of the U.S. and its allies in the Indo-Asia-Pacific region.

We have the opportunity to participate in a critical process that will serve as the basis of maritime law for years to come. Ratifying UNCLOS enables the U.S. to nominate members to the Law of the Sea Tribunal and the Continental Shelf Commission, both of which allow governments to defend their territorial claims, and confirms our standing to ensure that discussions on the freedom of navigation are consistent with American goals.

UNCLOS also supports American businesses that are looking to invest in commercial shipping lanes in the Arctic, in deep-sea mining and telecommunications operations, as well as other forms of maritime commerce.

The treaty will extend American interests in the seas and ocean floors beyond the 200-nautical mile exclusive economic zone. American businesses can develop and invest in maritime resources on the extended continental shelf and through the increasingly de-iced Arctic knowing they are supported by the legal certainty and stability of treaty law. This will help protect critical environmental spaces and the interests of the American worker. It is impossible to ignore that UNCLOS unites interests across the spectrum — from the U.S. Chamber of Commerce and the American Petroleum Institute; to leading environmental groups such as the National Resource Defense Council and World Wildlife Fund; to labor unions such as the AFL-CIO and the Seafarers International Union of North America.

Relying solely on American military power to guarantee our voice is heard and our interests are protected should not be our only geopolitical tool. To preserve our role as the guarantor of security in global commons, we need to embrace the benefits of legal certainty and stability guaranteed by international treaty law. By ratifying UNCLOS, the U.S. will demonstrate its commitment to the rule of law, freedom of navigation and diplomatic solutions in state-to-state maritime disputes.

This is why I am proud to be an original cosponsor of the bipartisan House resolution reevaluating Congress’s position on the treaty. I’ll continue working with my House Armed Services Committee colleagues on both sides of the aisle to push for ratification. As we pivot to Asia, we must embrace the rule of law and other forms of soft power, in addition to hard power, to ensure American interests are protected today and well into the future.