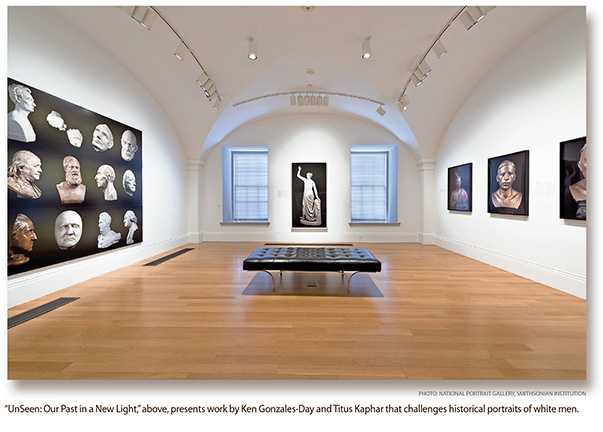 For centuries, portraiture has been dominated by the faces of rich white men who could afford to embellish their images in brushed paint or chiseled marble.

The National Portrait Gallery, whose collection is chockablock with those portraits, now offers a challenging and long overdue counterpoint in “UnSeen: Our Past in a New Light, Ken Gonzales-Day and Titus Kaphar.” Featuring the work of the two contemporary artists, the exhibition illustrates in stark and painful detail how our collective history is seen through a distorted artistic prism that has ignored people of color while glorifying the brutal and racist actions of white men. 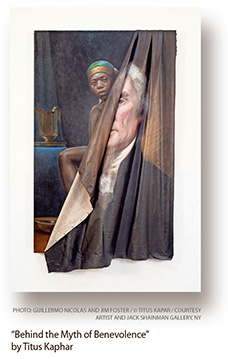 In his largest exhibition to date, Titus Kaphar’s 17 paintings pack a devastating punch, literally lifting the veil on the myths we tell ourselves about famous white men who have been canonized in American history textbooks. In “Behind the Myth of Benevolence,” a traditional portrait of Thomas Jefferson has been pulled back to reveal a painting of Sally Hemings, an enslaved woman who worked on Jefferson’s plantation. Jefferson fathered at least six of her children, a fact that Jefferson never denied even though some of his white descendants and other supporters did so for centuries.

In Kaphar’s painting, Hemings appears to be nude with only a bare leg and arm visible and a washbowl at her feet. Her sad eyes stare directly at the viewer, challenging our distorted account of Jefferson, who owned hundreds of slaves at the same time he wrote the Declaration of Independence detailing “self-evident” truths that “all men are created equal.” In another hypocritical turn, Jefferson included a passage condemning King George for the “assemblage of horrors” of slavery that was deleted by Congress before the historic document’s approval to appease Southern slave owners like Jefferson.

The murderous legacy of President Andrew Jackson is sliced to tatters in “Shred of Truth,” which depicts a traditional portrait of Jackson cut into strips of canvas that are flayed back and nailed to the wall. Reminiscent of leather fringe on traditional American Indian garments, the strips may reference Jackson’s brutal actions as the “Indian Killer” who signed the Indian Removal Act, triggering the deaths of more than 4,000 Cherokee on the “Trail of Tears” as more than 60,000 American Indians were forced off their ancestral lands. Jackson was a slave owner who said the Cherokee “must disappear” because they are “established in the midst of a superior race.” In a decision with racist echoes, President Trump may scrap a U.S. Treasury plan to replace Jackson on the front of the $20 bill with Underground Railroad leader Harriet Tubman. 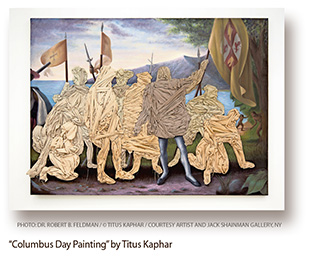 In “Columbus Day Painting,” Kaphar has bound Columbus’s landing party from head to toe in raw canvas like faceless mummies, focusing the viewer’s attention on their spears and raised crosses and the racist depiction of two small naked “natives” in the background. In a charged reinterpretation of a famous 1846 painting by John Vanderlyn, Kaphar underscores how we have lionized a man who oversaw the genocide and enslavement of indigenous people in their first encounters with European interlopers.

In the dual exhibition organized by National Portrait Gallery curators Taína Caragol and Asma Naeem, Ken Gonzales-Day contrasts photos of busts or sculptures of famous white men (Ben Franklin, George Washington and others) with a photo of a bust of an African woman and illustrations of American Indians. But his most powerful work by far is his “Erased Lynching” series featuring historic photos and postcards of dozens of lynchings that were altered to remove the victims. The haunting result is a penetrating focus on the perpetrators and indifferent witnesses in the photos, as the murderers and crowds of white onlookers view the snuffing of innocent lives as a tourist attraction. The saddest aspect is the children standing in the front of some of the crowds, ensuring that a legacy of brutality and racism was passed on to the next generation. That legacy continues today, but the lynchings have been replaced by the shooting of unarmed black men by police who rarely face prosecution. 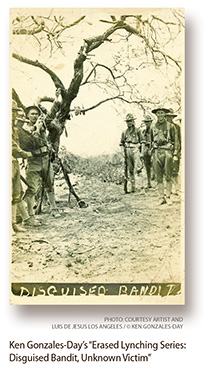 In Montgomery, Ala., on the site of a former warehouse where black people were enslaved, the recently opened Legacy Museum also tells the shameful history of more than 4,400 African American men, women and children who were lynched, burned alive, shot, drowned or burned to death by white mobs between 1877 and 1950. The memorial includes jars of soil from various lynching sites, offering a real physical reminder of the atrocities that have occurred beneath our feet. In his famous 1937 poem “Strange Fruit,” poet Abel Meeropol described in sparse, shattering detail how “Southern trees bear strange fruit” with “blood on the leaves and blood at the root.”

UnSeen: Our Past in a New Light, Ken Gonzales-Day and Titus Kaphar