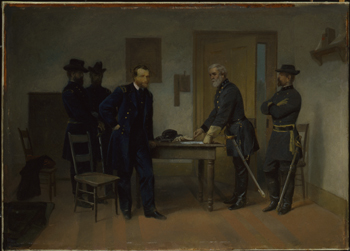 Next year marks 150 years since the end of America’s Civil War, and the country has been marching forward — much like Union soldiers did through Georgia — through the final months of remembering a traumatic, history-defining conflict that ultimately unified the country and ended slavery, but at the expense of an estimated 750,000 soldiers and an untold number of civilians. The divisive bitterness between the North and South that sparked secession lingers to this day, as the modern-day fights over flying the Confederate flag so aptly illustrate.

In particular, Washington, D.C., has been home to an outpouring of essays and exhibitions reflecting on the legacy and left-behind items of the Civil War, fought from 1861 to 1865. Perhaps it’s only fitting that much of the 150th anniversary commemoration takes place in D.C., the capital of a unified nation that remains a symbol of its deep political polarization, some of it fueled by historical grievances.

The country’s ongoing fragmentation chips away at the central idea of the Civil War — the deceptively literary notion that Americans fought Americans, brother against brother, in farms and fields. Stripped naked and unarmed, no doubt Rebel and Yankee soldiers looked as if they came from the same national womb, but in action, in fighting ability and in leadership, they were from two different worlds (and almost two different countries).

The generals embodied these differences, adapting their armies to the costly nature of the war, each in their own way. In the end, the two legendary figures at the head of the warring armies — Robert E. Lee, the charismatic general of the Confederacy, and Ulysses S. Grant, the eventual Union victor by a bloody-minded tenacity of spirit — proved to be metaphoric examples of what the war was about. 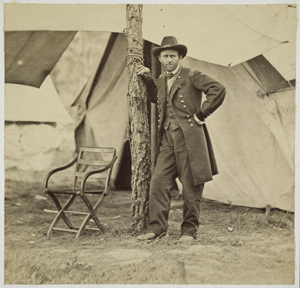 Grant is pictured in Mathew B. Brady’s 1864 photograph as part of the National Portrait Gallery’s “One Life” exhibition showcasing the two Civil War generals.

The National Portrait Gallery (along with a number of institutions throughout the city such as the Library of Congress and American History Museum) features a variety of exhibits dedicated to the Civil War — among them “Mr. Lincoln’s Washington: A Civil War Portfolio” depicting the effects of the war on the District of Columbia and “Mathew Brady’s Photographs of Union Generals.”

But it’s the smaller “One Life” exhibit that offers the most intriguing insights on two generals whose lives were intertwined by combat. The “One Life” series usually focuses on a single person who had a major impact on American life — people that range from abolitionist Frederick Douglass to Elvis Presley to former President Ronald Reagan. For the first time, the series is focusing on two figures: Lee and Grant, though it can be argued the exhibit is about the fight for one life, that of the United States of America.

Although both men were West Point graduates and fought in the Mexican-American War, which proved to be a training ground for many of the military leaders of the Civil War, the exhibit reveals that they could not have been any more different from each other. In their rise to the highest ranks, their leadership styles, military strategies and personalities, they exuded the values and character of their respective “nations.”

For poet Walt Whitman, who tended to the Civil War wounded in the nation’s capital, the battle was one of ideals, fiercely held and fought over by average men. Grant, who rose from failed business ventures in the country’s Midwest to become the leader of the Union Army, typified the idea of the uncommon man hailing from a common background: brusque, masculine, cigar-smoking and hardscrabble. He never became an adept politician, or president, but he came to understand war the way an ordinary soldier might — as a pitiless enterprise whose objective is the continued destruction of men and materiel.

Grant was not so much a leader of men as a leader of armies. He wasn’t particularly adored by his troops, but he was respected. In the political realm, he was ill at ease in the presence of Abraham Lincoln, a complicated man with a similar background but a more eloquent way of leading. No one would ever write a poetic elegy about Grant. Nevertheless, he was a faithful and strong family man who, near the end of his life, stricken with cancer, managed through pain and sorrow to write one of the most highly praised autobiographies in American literature.

In stark contrast, if one were to think of the plantation elites of the South as a kind of democratic aristocracy steeped in gentility, then Robert E. Lee, the son of a dashing Revolutionary War hero, was its master. The polished Confederate general became a heroic figure as well, with his seemingly wounded, far-seeing eyes, quiet manner of talking and the palatable regard and love he inspired from his troops. 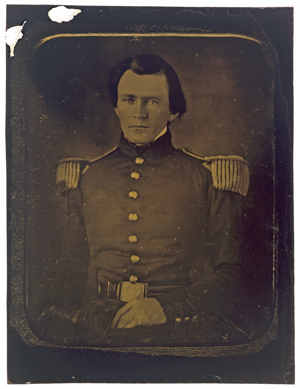 Despite his daring strategic thinking that outmaneuvered a variety of Union generals, Lee failed to understand the true nature of the Civil War and the violence that would portend future conflicts. As he was said to be watching the carnage of Union soldiers charging uphill to slaughter in the Battle of Fredericksburg, he reportedly observed that, “It is a good thing that war is so terrible, else we grow to love it too much.”

Lee saw what was coming: There was no escaping Grant and the Union’s philosophy of total war that destroys armies and resources. That day in Fredericksburg, the Union suffered twice as many casualties as did the Confederates. Yet in subsequent battles spanning Virginia, despite heavy losses, each day Grant’s army would resurface to fight again without respite. It was an implacable fight right up to Appomattox, the courthouse where Lee would surrender to Grant.

Grant treated Lee with the deference of a great man from another era. After the war, Lee became president of what is now Washington and Lee University and supported Reconstruction. He remains an iconic military figure, a reverence that colors the portraits in “One Life,” which depict Lee as a young officer and as a seasoned general. But whether he’s posing with his officers or on his legendary horse, he always looks like a man who upon death would instantly become immortalized as a statue.

Grant, on the other hand, was not exactly humble, but he remains a sort of mystery and the exhibition shows that. As president, Grant pursued Reconstruction of the South and pushed for African American rights, yet his time in office was marred by corruption and financial crisis. His presidency did not go down well in the history books, but more recent scholars have been somewhat kinder to Grant.

At the National Portrait Gallery, we see Grant in his never-changing uniform: thick beard, cigar and a solidity that seems impenetrable. Grant looks like a thoroughly modern late-19th-century man, while Lee seems only at home in his time, a bygone era in America’s evolution.

The composite portrait never quite comes together because the two men, like the country, were so fundamentally at odds. Nevertheless, Grant and Lee deeply affected each other and the outcome of a conflict to which both will forever be tied, together.

One Life: Grant and Lee