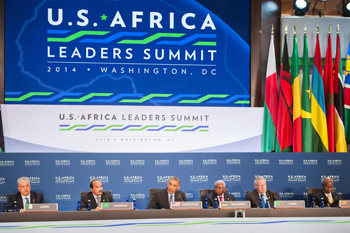 For a few days in early August, the promise of a resurgent continent arrested the world’s most powerful city. Traffic ground to a halt and hotels were at capacity as nearly 50 African heads of state descended on Washington, D.C., each with his or her own agenda but all visiting under the banner of a changing stereotype. What has historically been the world’s most downtrodden continent is now one of its most hopeful.

The 21st century will be Africa’s century, optimists say. The demographics and economics seem to point that way. A 2013 study from the Boston Consulting Group found that of the 30 countries making the greatest progress in improving their citizens’ well being, eight are in sub-Sahara Africa. The African Development Bank expects the continent to grow 4.8 percent in 2014 and 5 to 6 percent in 2015, “levels which have not been seen since the global economic crisis of 2009.”

In setting the stage for the U.S.-Africa Leaders Summit, the first event of its kind, U.S. National Security Adviser Susan Rice drew contrasting images of an old and new Africa, to the extent that such a kaleidoscope of cultures and languages can be grouped as one.

President Obama, center, address leaders from across the African continent who came to D.C. for a three-day U.S.-Africa Leaders Summit, the largest event any U.S. president has held with African heads of state and government.

“Let me begin by underscoring … that today’s Africa is not at all the same place it was when I served as assistant secretary of state during the Clinton administration,” Rice said during a July 30 speech previewing the summit. She went on to recount how, less than 20 years ago, “Sierra Leone was locked in a decade-long civil war, with rebels hacking off limbs and abducting U.N. peacekeepers.”

Rice was a prominent member of President Bill Clinton’s administration in the mid-1990s when horrific violence plagued countries like Sierra Leone and Rwanda. U.S. inaction in the face of the Rwandan genocide seemed to scar her to the point of vowing humanitarian intervention the next time she was in a similar position, according to Samantha Power, a onetime journalist who would eventually succeed Rice as U.S. ambassador to the United Nations.

Aside from turning the page on a history of violence, Rice’s July 30 speech at the U.S. Institute of Peace sought to cast America’s relations with Africa as, in her words, “fundamentally different” than that of the rest of the world.

“We don’t see Africa as a pipeline to extract vital resources, nor as a funnel for charity,” she said in a thinly veiled shot at China, which has flooded the continent with investment in return for natural resources, often without conditions on respect for human rights.

China’s no-strings investments, however, mean that “we have some catching up to do,” former New York Mayor Michael Bloomberg said at the summit.

U.S. business leaders do increasingly see investment, rather than aid, as a means of growing African economies, and the summit reflected that shift in strategy. The White House on Aug. 6 announced $12 billion in new commitments, mostly from private firms, for a program to improve access to electricity across Africa. General Electric by itself plans to invest $2 billion across Africa by 2018. At the summit, U.S. firms secured deals for more than $14 billion in Africa’s banking, clean energy and aviation sectors, among others.

While Obama and African leaders tried to cast the continent in a new light during the summit, Africa’s economic potential remains clouded by rampant poverty, governance problems and endemic graft.

Africa may be home to six of the world’s 10 fastest-growing economies, but 10 of the world’s poorest countries are African. In fact, sub-Sahara Africa is the only developing region that saw the number of people living in extreme poverty rise, with half the population today living on $1.25 or less a day. Two out of every three sub-Saharan Africans lack electricity. The continent also lags far behind Latin America and Asia in building up its middle class, and most African nations consistently sit at the bottom of transparency and ease of doing business rankings. At the summit, Vice President Joe Biden warned leaders that corruption is “a cancer” that directly threatens “each of your nations’ stability.”

Africa’s weak health care system also cast a pall over the summit as the Ebola virus that has ravaged West Africa kept the presidents of Liberia and Sierra Leone at home. Even the organization of the summit itself came under fire, as some observers wondered if the administration was trying to squeeze in too many events with no overarching focus.

Despite all of the business deals announced at the Aug. 4-6 summit — and nearly 100 side events — some companies felt left out as the logistical challenges of coordinating meetings between dozens of corporate executives and African delegations became apparent.

Jennifer Cooke, Africa Program director at the Center for Strategic and International Studies, said that aside from the U.S.-Africa Business Forum on Aug. 5, “there were not that many structured opportunities” for private firms to meet with African delegations.

That arrangement is fine for large firms already present in Africa but challenging for smaller ones trying to set up shop there, she said. Some companies that got word of the Department of Commerce-hosted business forum were scrambling to get on the guest list, she added.

It wasn’t just American businessmen and women who were jostling for face time but African leaders themselves. Heads of state invited to the summit were likely irked to learn that their several thousand-mile trips to Washington, D.C., would not include a bilateral meeting with Obama. Some countries sent deputies or foreign ministers instead of heads of state. 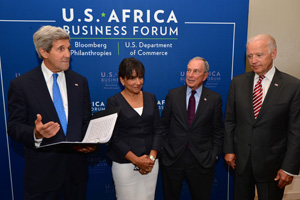 There simply wasn’t time for bilateral meetings with such a large number of leaders attending, U.S. Deputy National Security Adviser for Strategic Communications Ben Rhodes told reporters on a conference call, “so the simplest thing is for [President Obama] to devote his time to engaging broadly with all the leaders. That way we’re not singling out individuals at the expense of the other leaders.”

The summit’s countless formal and informal meetings involving African officials, civil society groups, corporations and even the pop star Akon raise the question of messaging: Did the Obama administration relay a concise narrative for the summit’s goals, or was that even the point?

“I think the president’s messaging is right on in terms of focusing on an emerging generation of African leaders that are going to drive economic growth” and be involved in improving democratic governance, said Tara Sonenshine, a former undersecretary of state for public diplomacy who is now an adjunct faculty member at the George Washington University.

The administration’s Young African Leaders Initiative will bring about 500 young Africans to the United States every year for coursework and mentoring. Obama made a point of mentioning these youth at a press conference, saying he looked forward to “seeing all the great things that you do when you go back home.”

The important theme of African youth notwithstanding, the divergent paths of the continent’s countries defy any neat categorization. Fighting involving al-Qaeda-inspired militants and Tuareg separatists has plagued Mali while, further south, Ghana’s economic growth has turned heads, despite its recent fiscal troubles.

“I do tend to question a little bit the utility of big summitry in a place that is so diverse,” Cooke said, arguing that “you can’t capture Africa in any single narrative.” The unprecedentedly large gathering could set a standard for continental summits that are diffuse and broad in scope, she added.

Not on the Agenda

The issue of human rights was conspicuously absent from the official agenda set by the Obama administration, and rights groups were left to hold their own sessions separately.

“I understand the important focus of the summit on issues around trade, investment and security … but we cannot miss the fact that all of these are not going to be sustainable unless they are anchored in building institutions for rule of law, for governance, for respect for human rights,” said Daniel Bekele, executive director of the Africa division of Human Rights Watch.

The week of the summit, a few dozen protesters were on Pennsylvania Avenue, near the White House, shouting slogans decrying the administration’s welcoming of South Sudan President Salva Kiir. Despite presiding over months of ethnic violence in South Sudan earlier this year, Kiir enjoyed a photo op with U.S. Secretary of State John Kerry on the sidelines of the summit.

But Obama’s supporters point out that if the White House were to disinvite Kiir, it would also have to rescind invites to a number of African leaders with far more checkered human rights records.

Current and former Obama administration officials also argue that raising human rights issues in private with African leaders is more effective than a public scolding. “Every meeting I’ve ever been to on Africa, there’s always been a reminder about human rights, about instability, conflict, corruption,” Sonenshine said.

But Bekele worries that it has become standard practice for governments to discuss human rights in private.

“While it is true that private engagement is useful … at the same time, public engagement of this issue is also significantly important,” he said. “We are talking about issues that affect the lives of millions and millions of people in the region and this is not something to be left for … secret discussion between diplomats and government officials.”

For her part, Rice touched generally on human rights in her remarks at the U.S. Institute of Peace: “Leaders must lead, especially on difficult issues. And protecting the human rights of all their people, regardless of religion, gender, ethnicity or sexual orientation, is a government’s first duty,” she said.

But for groups like Human Rights Watch and, for example, the editorial board of the Washington Post, which hit out against Obama on the issue, administration officials should have been more pointed and public with objections to the human rights records of some of their summit guests.

At least one head of state was questioned in public on the issue during his trip to Washington, D.C. At an Aug. 1 speech at the National Press Club, when asked how he could improve civil liberties in his country, Republic of Congo President Denis Sassou Nguesso replied that, “we are … in a sense, a mecca for the press. There isn’t any freer press than the press in the Congo.”

Hyperbole aside (the Republic of Congo is ranked 82nd for press freedom by Reporters Without Borders), human rights groups might have appreciated that the question was asked and Nguesso put aside the summit platitudes to give a somewhat detailed answer.