Home The Washington Diplomat September 2014 No Excuses: Finding Time to Exercise Doesn’t Have to be Difficult 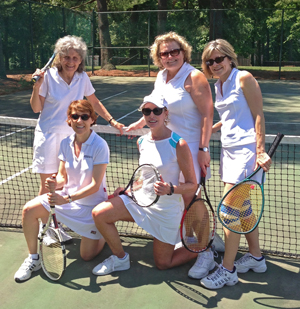 Finding time to exercise doesn’t have to be difficult, said Kathy Kemper, a longtime Washington tennis coach who now heads the Institute for Education. She has worked with enough U.S. senators, Cabinet members, Supreme Court justices and diplomats to know.

“It’s common knowledge that exercise is good,” said Kemper, former head women’s tennis coach at Georgetown University who is well known in local diplomatic circles (she regularly coaches ambassadors and their wives). “If you’re the top dog, you can dictate your schedule.”

A 50-minute, one-on-one or a 90-minute doubles tennis session with her is guaranteed to get hearts pumping and muscles working. She always warms up with a game she calls “short court,” or mini tennis. Players stand close to the net, near the first service line, and hit the ball gently to have a rally (a sequence of shots within a point).

“That gets your eyes and your hands operating together and it gets your balance warmed up. It gets your tendons and your ligaments warmed up,” said Kemper, who has worked with diplomats from Australia, China, Denmark, Indonesia, Japan, Luxembourg, Mexico, Norway, Portugal, Singapore, Switzerland, Sweden, the United Kingdom and more.

When the weather is cold, she has clients jog around the court and do jumping jacks, too.

Those who can’t make it to a game with her or to the gym have no excuses, Kemper said. She recommends “old-school exercises” such as push-ups and sit-ups, which don’t require equipment and can be done in your pajamas.

Hiking and walking are popular among diplomats, she added, and moving your body outside a professional setting has enormous benefits.

“If you’re sitting at your office in the U.K. Embassy, for example, you’re not going to be prone to look at a bird or flowers or sweat,” Kemper said. “I think it’s just pulling people out of their habitat and putting them in nature. It’s just so healthy. That’s not debatable.”