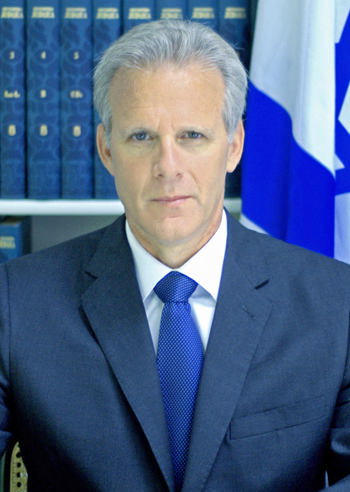 Michael Oren grew up in New Jersey and immigrated to Israel in 1979. Ron Dermer was raised in Miami Beach and relocated to the Jewish state in 1996. Both men gave up their American citizenship to represent the government of Prime Minister Benjamin Netanyahu as Israel’s top diplomat in the United States.

Beyond that, Dermer has little in common — politically, ideologically or academically — with Oren, the man he replaced at the fortress-like Israeli Embassy in Washington a year and a half ago.

Former Israeli Ambassador Michael Oren, an academic and author, is hoping to become the only U.S.-born member of the Knesset when Israel holds its elections on March 17.

Now, with national elections set for March 17, Oren, a Princeton-educated academic and respected former diplomat, hopes voters will make him the only U.S.-born member of Israel’s parliament. On the other hand, Dermer, a former Republican political operative and close Netanyahu advisor, is busy fending off a rising tide of angry criticism from Democratic leaders, the White House and Secretary of State John Kerry — not to mention some Israelis — that his undiplomatic style is hurting U.S.-Israel ties.

The 60-year-old Oren, a former paratrooper with the Israel Defense Forces, is campaigning for a seat in the 120-member Knesset as part of Kulanu (Hebrew for “all of us”), a new centrist party formed by veteran politician Moshe Kahlon.

“I’ve always served Israel in one capacity or another, whether on the diplomatic front, or the battlefield, or on the TV screen, and this seemed like a natural progression,” Oren told The Washington Diplomat in a phone interview from Tel Aviv. “With Kulanu, I have exclusive control of developing our diplomatic approach, which is very unique in Israeli politics. It was a great opportunity, and I very much believe in our platform.”

In late January, Oren joined other Israeli politicians in urging Netanyahu to cancel his planned March 3 speech to Congress about Iran’s nuclear program. The invitation from House Speaker John Boehner, a Republican from Ohio, was apparently orchestrated by none other than Dermer — without the consent of the White House. That breach of protocol unleashed a crisis that quickly backfired against Netanyahu when President Obama made it clear that neither he nor Vice President Joe Biden would make themselves available to meet with Israel’s leader. While the speech may help Netanyahu shore up his security bona fides back home ahead of the March vote, his critics call it a cynical bit of political showmanship that threatens the bipartisan tradition of support for Israel on Capitol Hill.

“The prime minister is right in doing everything in his power to prevent Iran from acquiring nuclear capability. But I don’t think Congress is the right forum for that. The best forum for achieving that goal is the AIPAC conference,” Oren told us, referring to the annual policy meeting of the American Israel Public Affairs Committee, set for March 1 to 3 (Netanyahu is scheduled to address the conference as well).

Dermer couldn’t be reached for comment, and Oren declined to openly criticize the man who replaced him in Washington; indeed, even as ambassador, he kept his feelings about the Netanyahu government mostly to himself. But many lawmakers on Capitol Hill are furious with Israel’s top envoy here, and the number of Democrats who say they won’t attend the speech continues to grow. The latest to give Bibi the snub: Democratic National Committee Chairwoman Debbie Wasserman Schultz of Florida.

“The whole thing is just so sad. It’s not like the United States has too many allies,” opined Tucker Carlson, editor-in-chief of the Daily Caller. “Our relationship with Israel is not being well-served by the ambassador to the United States from Israel. And that’s just a shame.”

Columnist Bradley Burston of Israel’s left-leaning newspaper Haaretz went even further. “Israel can no longer afford to keep Ron Dermer in Washington,” he wrote in early February. “The danger in leaving him at his post is much too great. He has become a liability even to the Republican Party he once served. Israel needs to fire Dermer now. Israel cannot afford for its most crucial ambassador to dig the country an even deeper hole.”

“There may be some people who believe that the prime minister of Israel should have declined an invitation to speak before the most powerful parliament in the world on an issue that concerns the future and survival of Israel. But we have learned from our history that the world becomes a more dangerous place for the Jewish people when the Jewish people are silent,” he said.

But Dermer’s critics aren’t buying it. Sarah Jones, writing in the PoliticusUSA blog, said the stunt could anger the very man who’ll be determining the fate of those nuclear talks.

“The thing to do isn’t to run an end game around the fellow who runs the country and has provided huge support, upon which you are relying,” she wrote. “And while it wasn’t partisan before, Netanyahu just made it partisan. He just cut out all of the Democrats who support Israel and spit in their face by trying to use Speaker John Boehner’s bad judgment as a weapon against the president.”

Netanyahu didn’t exactly endear himself to Obama when he openly supported Mitt Romney in the 2012 presidential campaign — a move Dermer reportedly backed as well. That made Dermer an unlikely choice to serve as ambassador after Obama won, with some seeing it as a diplomatic snub that needlessly politicized the posting. Dermer, a protégé of Republican pollster Frank Luntz, seems to be having a hard time letting go of his political roots. In January, he was reprimanded for campaigning on behalf of Netanyahu in violation of Israeli Civil Service Commission rules.

John Judis, writing in the New Republic, said Dermer “epitomized the Netanyahu government’s hostility to Barack Obama and his administration” long before his appointment as ambassador. 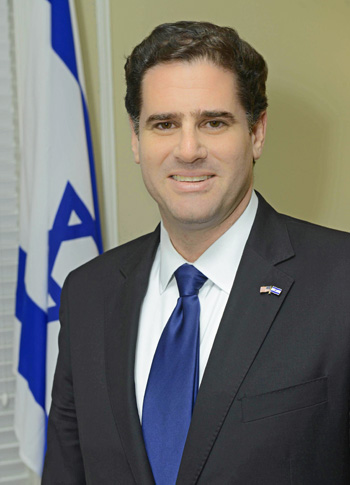 Ron Dermer, a veteran Republican political operative, was widely seen as a provocative pick to serve as Israel’s ambassador in Washington. Longstanding tensions between Dermer’s boss, Prime Minister Benjamin Netanyahu, and President Obama recently spilled out into the open when Netanyahu sidestepped the White House to speak before Congress. The friction, however, has not significantly altered America’s longstanding partnership with Israel.

In our interview, Oren passed up the chance to criticize the man famously nicknamed “Bibi’s brain.” He also declined to get into the specifics of his party’s approach to resolving the Arab-Israeli conflict, though Oren is on record as supporting a freeze in Jewish settlement building in the West Bank outside major existing settlement blocs.

That way, Israel would keep the idea of a two-state solution viable, though Oren no longer advocates — as he did as recently as late last year — a unilateral Israeli withdrawal from Palestinian population centers if ongoing peace talks were to collapse.

“The idea is that right now, there’s no Palestinian leader who is able and willing to negotiate with us,” he told us. “We have to always keep the door open to final-status negotiations, but until that happens, we’re not going to remain passive. We’re going to take actions in the West Bank which on the one hand will enhance our security, while on the other convince the world that we’re very serious about a peace agreement.”

Oren is ranked fourth on the slate for Kulanu, which, according to a Feb. 9 opinion poll, is likely to garner 11 seats in the Knesset — far less than Israel’s two main parties: Likud, led by Netanyahu, which would win 23 seats if the election were held now, and the center-left Labor Party of Isaac Herzog, which would win 27.

Eytan Gilboa, director of the Center for International Communication at Israel’s Bar-Ilan University, said Dermer’s short-lived career as ambassador is over — regardless of who wins the election later this month.

“I think Dermer is finished,” he told us. “He will not be able to deal with the White House or the State Department. If Netanyahu is able to form the next coalition and continue as prime minister, Dermer will have to be replaced. I think perhaps Netanyahu will learn his lesson and appoint someone who will have much better relations with the White House.”

And if Herzog wins the elections and is asked to establish a government, “he will immediately replace Ron Dermer,” said Gilboa, who spoke out against Dermer’s nomination as Israel’s envoy in Washington from the get-go.

“In my judgment, it was a huge mistake to appoint Dermer because of his close association with the Republicans,” said the professor. “He was behind the failed strategy of supporting Mitt Romney, even though the prime minister denies it.”

Meanwhile, Gilboa speculated that Oren joined forces with Kulanu because “it was probably the only party that would have accepted” the former ambassador.

“Labor would not accept him, and neither would Yair Lapid [chairman of Yesh Atid, the second-largest party in the Knesset]. He was looking for a party at the center,” said the Bar-Ilan professor. “Like Michael Oren, Kahlon is in favor of a two-state solution, and in terms of ideology, Kahlon’s model is Menachem Begin, who negotiated, implemented and achieved the peace agreement with Egypt. He says the status quo is not good, so in that respect, the leader of the party and Oren are the same.”

Gilboa suggested that Kahlon is “using Oren quite extensively” because of Oren’s international experience, eloquence and excellent command of English.

Oren, who attends three or four town-hall meetings and planning sessions a day, said he hopes his expertise in international issues will help earn him a seat in the Knesset — and more prominence for Kulanu, which is better-known for its views on bread-and-butter issues like pensions, social reforms and Israel’s rising cost of living.

But as the former ambassador — who was running late for a meeting — pointed out as he rushed to get off the phone, “without a robust and compelling foreign policy, we cannot fully ensure the health of the Israeli economy and its social future.”