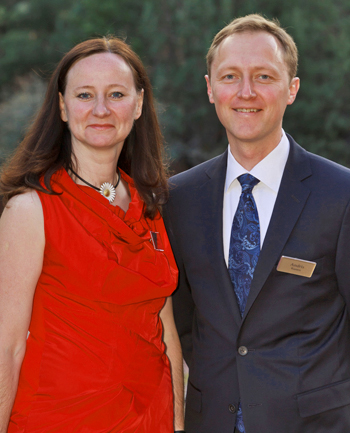 “We met in the sandbox” — not as toddlers, but as university track athletes. “I was doing the triple jump and the long jump,” recalled Gunta Razāne, wife of Latvian Ambassador Andris Razāns, himself a former competitive runner.

“I won first place in the Baltic Winter Games for 400 meters — we had no hurdles since it was winter — and I came in third in the whole Soviet Union when Latvia was still Soviet,” said the personable diplomatic wife. “I did the hurdles because they were more fun.

“I ran from the time I was 10 until I was about 20, my second year at university,” she said. “My ribbons and trophies are at home in Riga; I can’t bring all that heavy stuff with me.”

Gunta Razāne, wife of Latvian Ambassador Andris Razāns, was a former competitive runner in college who worked in banking and for the Latvian Chamber of Commerce before her husband’s posting in Washington.

Instead, they have each brought their memories and lessons from growing up in a small but proud Baltic nation that chafed under Soviet control for nearly 50 years and now worries about a resurgent Russia on its border. As a result, Latvia has been using its 2015 presidency of the European Union to sound the alarm about Russian meddling in Ukraine (also see “Latvia Takes Over EU Presidency Amid Fears of Russian Aggression” in the January 2015 issue of The Washington Diplomat). Later this May, Riga is also hosting a summit for the Eastern Partnership, an initiative governing the EU’s relationship with the former Soviet republics of Armenia, Azerbaijan, Belarus, Georgia, Moldova and, notably, Ukraine.

Since regaining its independence in 1991, Latvia has steadily aligned itself with the West, joining the EU and NATO in 2004 and adopting the euro in 2014. The country of 2 million people is also proud to have survived an economic crash in 2008 that dumped cold water on its red-hot growth, which was fueled by risky borrowing and excessive spending. Painful austerity measures have begun to turn Latvia’s finances around, and of all the 15 former Soviet republics, only Estonia exceeds Latvia in per-capita GDP — a stunning turnaround for a nation occupied by both the Soviets and Nazis.

“I never even dreamed of working abroad, traveling, studying and living in different countries,” Razāne told us. “In 1989 I was 23 and I remember feeling movement in the air. Two years later in 1991, when I was 25, Latvia got its freedom. We are the lucky generation. It’s very natural for us to remember Soviet times and now again see Latvia belong to Europe.”

Her husband, speaking to The Diplomat for our January issue, also touts his country’s impressive transformation. “I’m old enough and fortunate enough to remember when Latvia was part of the Soviet Union. I spent my childhood and early years in a very different society from what we have today,” said Razāns, who studied engineering and holds a master’s degree in history.

After joining his country’s Foreign Ministry in 1992, Razāns embarked on his first overseas assignment to the Latvian Embassy in Denmark. He went on to become deputy chief of mission in Sweden (2000-03); diplomatic advisor to the Latvian prime minister (2004); ambassador to Denmark (2004-09); ambassador to Morocco (2008-10); and political director and undersecretary of state at the Foreign Ministry (2010-12).

His wife works to promote Latvia but otherwise is not working while in Washington, which is unusual for her.

“As a student, I was supposed to study law but it was Soviet times. I chose business instead,” she said.

With a master’s in business administration, Razāne worked in finance during most of her husband’s career, whether they were living in Riga or abroad. She has taken banking business-related training programs in Germany, Sweden, Belgium, Denmark and Britain. When he was posted to Sweden as deputy chief of mission and to Denmark as ambassador, she worked with large banks in both countries, sometimes continuing to represent those banks in their Latvian branches when the family returned to Riga. Over the years, she has also worked with the Latvian Chamber of Commerce and served as its representative to the United States.

The couple has two children: Their daughter Zane is now 28 years old and working on her master’s degree in digital communication at Johns Hopkins University. Previously, she went to Lund University in Sweden and then business school in Denmark.

Their son Herman is in eighth grade at the British School of Washington, which Razāne praised as “demanding not only for the students, but for the parents who help with the homework.”

“Things are easier now that Zane is here. She helps Herman with his homework and everything else. They are very close.” 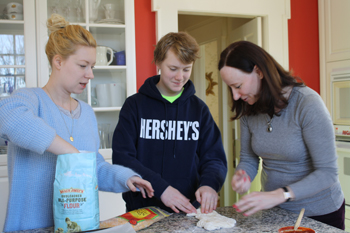 In the meantime, Razāne also keeps busy by helping to showcase Latvia through the embassy’s packed arts calendar. To celebrate the country’s EU presidency and Riga’s designation as the 2014 European Capital of Culture, the embassy has held a variety of art exhibits, lectures and concerts in recent months. Among them there was: a joint show with the Swedish Embassy highlighting amber textile art; a display of urban landscape paintings at the Ronald Reagan Building; a conference on transatlantic strategy in Eastern Europe on Capitol Hill; and a chamber music concert at the Phillips Collection. Other programs will be planned throughout the year.

“Just before the first snowstorm in January, there was an art exhibit in New York,” Razāne said. “The Latvian National Choir will be at the Lincoln Center on April 9 and on April 29, there is a jazz concert at the Kennedy Center. In May, there is another Latvian art exhibit. We also have a glass exhibit going to Mexico.”

Razāne is keen to show Americans the many talents of her homeland. “I am a straightforward, friendly person who is open to new things,” she told us. “I have so many ideas of things I’d like to do but there are only 24 hours in a day. I have to prioritize and fulfill some of my ideas later.”

In particular, Razāne said she is proud by the artistry of Latvians, whose capital, Riga, is considered a landmark of art nouveau architecture. She also noted that the conductor and music director of the Boston Symphony Orchestra, Andris Nelsons, is Latvian and his wife, Kristine Opolais, sings with the Metropolitan Opera, as do several other Latvians.

“Latvians sing more than people from other countries,” she said. “Almost all of us sing in a chorus…. We sing all night for our midsummer celebration. We are singing songs when the sun goes down and singing a special song for the sunrise.”

The country also holds one of the largest amateur choral events in the world, the Latvian Song and Dance Festival, in which some 30,000 people participate. “A song fest is traditional for us with singers and dancers. We walk through the city, singing, like a parade, and people line the sidewalks,” Razāne explained. “Some families sing more than others and even have singing books that they have saved down through the generations.

“We have talented, hardworking people who have a wonderful nature. Latvia is one of the greenest countries in the world with 50 percent forest and we have 300 miles of sandy beaches that are very clean,” she added.

Latvians are also renowned for their crafts, a tradition that the embassy often showcases in its exhibits. During our interview, Razāne displayed intricately crocheted white snowflakes she made to hang on a Christmas tree. “I made these for the Latvian Christmas bazaar and the embassy’s Christmas tree,” she said. “I like to do my part. I make them all year long.”

In fact, Latvia’s Foxhall Crescent residence is filled with stunning Latvian glass bowls and features a striking red kitchen punctuated by three hanging paper lights. One is cut in the shape of a furry dog; another looks more like a big white ball made out of bicycle pedals, and the third is a cream-colored confection reminiscent of Latvian braided bread.

When they’re not busy promoting Latvia, the athletic couple run in Battery Kemble Park, near their residence. “I’m trying to run each day but usually I run twice a week,” said Razāne, who also enjoys swimming, ice skating and skiing.

“We usually go skiing in Europe each year as a family, some time in February or March,” she said. “When I was pregnant I couldn’t ski; I just looked on. Our daughter and my husband just said, ‘You should wait.’ That didn’t feel really fair,” she laughed.