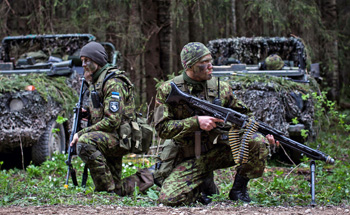 “The 1980s are now calling to ask for their foreign policy back because the Cold War’s been over for 20 years,” Obama told Romney during a presidential debate.

Russia has annexed Crimea, and Moscow’s intervention in Syria put Russia at loggerheads with Turkey, a member of the North Atlantic Treaty Organization.

Estonian army scouts from the 1st Battalion practice defensive maneuvers during a NATO exercise in May 2015. Estonia and its fellow Baltic neighbors have been among the most vocal Eastern European nations calling for increased U.S. and NATO military support to fend off an assertive Russia.

The Obama administration has, belatedly for some, reacted to Russia’s irredentist policies by requesting a quadrupling of defense spending in Central and Eastern Europe for fiscal 2017. The money would pay for weapons and equipment sent to NATO countries nervous about Russian President Vladimir Putin’s saber rattling.

Critics of the move say it would perversely ratchet up Cold War-era tensions with Russia at a time when Putin, weakened by low oil prices and costly foreign interventions, is making overtures to the West.

The Pentagon’s so-called European Reassurance Initiative (ERI) would boost military spending in the region to $3.4 billion — up from $789 million the previous fiscal year — and support an average of 5,100 U.S. military personnel at U.S. European Command. The initiative is meant to beef up U.S. deterrence measures against Russia, in part by using $130 million to keep U.S. Air Force personnel and aircraft in Europe.

The spending surge in Europe is an effort “to deter Russian aggression, and we haven’t had to worry about this for 25 years,” Defense Secretary Ash Carter said in a February speech. “While I wish it were otherwise, now we do.”

“NATO’s policy toward Russia remains unfriendly and generally obdurate,” Russian Prime Minister Dmitry Medvedev said in February at the Munich Security Conference. “Speaking bluntly, we are rapidly rolling into a period of a new cold war.”

As the U.S. ramps up spending in Europe, Russia has its hands full managing a reeling economy. Low oil and gas prices are expected to force a 10 percent cut in Russian defense procurement this year, according to the chief executive of Rostec, a state-owned weapons-maker.

“I doubt [the ERI] will provoke any significant response from Russia, which has serious financial problems due to sanctions and low oil prices,” retired Adm. James Stavridis, former supreme allied commander of NATO, wrote in an email to The Diplomat. Regardless of Russia’s reaction, the big boost in funding for the ERI is the right call, he said.

The Obama administration “is awakening to the reality that Europe and the Middle East will continue to matter deeply and require U.S. engagement and leadership,” wrote Stavridis, now dean of the Fletcher School of Law and Diplomacy at Tufts University. “NATO is the central security pillar for doing so.”

Jorge Benitez, a senior fellow at the Atlantic Council, said that despite the significant increase in military funding, the ERI program was insufficient to support NATO allies in Eastern Europe.

Adding a couple of U.S. brigades in Europe “is not a proportional response and does not restore deterrence to Europe,” wrote Benitez, a former NATO adviser in the Office of the Secretary of Defense, in an email to The Diplomat.

The ERI would have a limited effect if it ends up being a unilateral U.S. action, Benitez added.

“There needs to be a proportional and visible European military presence in the eastern allies to make sure Russia knows that NATO’s borders are not just protected by the Americans, but also by our European allies,” he said.

Washington has long complained that its European allies are shirking their NATO responsibilities — instead riding on America’s financial coattails. That’s precisely why some experts have criticized the recent surge in U.S. military spending, arguing that European nations need to pony up their fair share of money and resources.

Critics also say increasing America’s military presence near Russia’s border is an unnecessary provocation, especially at a time when tensions in Ukraine have simmered down and Putin recently announced a withdrawal of Russian forces from Syria.

Lawrence J. Korb and Eric Goepel of the Center for American Progress, writing in Defense One in February, say Washington is conjuring the specter of a “Cold War boogeyman” to raise defense spending.

“While there is no ignoring the Russian annexation of Crimea in 2014 and the Russo-Georgian war in 2008, to interpret these events as some kind of Russian ‘resurgence’ is to grossly inflate the danger Russia poses to NATO and the United States,” they wrote. “A NATO buildup of this magnitude also neglects to take into account just how provocative such a move would be; by concentrating troops on Russia’s border, we are playing into Putin’s long-standing criticisms of NATO encirclement.”

They added: “Claims that any NATO member is at risk of Russian invasion is a flawed reading of recent history. No matter what one might think of Putin, the idea that he would risk a war with NATO is ridiculous on its face.”

But defense hawks in Congress say the notion is far from ridiculous.

The Republican chairmen of the Senate and House Armed Services Committees, Sen. John McCain (R-Ariz.) and Rep. Mac Thornberry (R-Texas), have both urged the Obama administration to do more to confront Putin. Thornberry has called Russia “the only nation that continues to pose an existential threat to the United States”; McCain has blasted Obama for meeting with Putin and therefore bringing Russia’s strongman out of relative isolation. 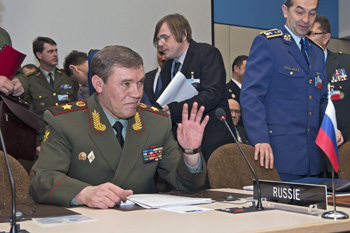 Gen. Valery Gerasimov, chief of the Russian Armed Forces, speaks at a NATO Chiefs of Defense Session with the NATO-Russia Council in January 2014. Russia argues that according to a 1997 pact, NATO is obliged to keep its distance from Russia’s borders. Russia’s Eastern European neighbors counter that because of Moscow’s meddling in Ukraine, that pact is void.

The ERI funding comes via the Overseas Contingency Operation (OCO) fund, a mechanism that has been used to skirt spending caps during recent budgetary battles on Capitol Hill. The short-term nature of OCO funding makes it a flawed means of sending a message of deterrence, Todd Harrison, director of defense budget analysis at the Center for Strategic and International Studies (CSIS), told Defense News and other outlets last November.

However, Harrison’s colleagues at CSIS, writing in a February brief, said the fact that the program was funded through OCO was only a minor obstacle, and that it represents a long-term commitment to the region. Lisa Sawyer Samp and Mark F. Cancian note that “with an expanding war in Iraq against ISIL [Islamic State] and longer-term commitments recently made in Afghanistan, OCO appears to have a long future. Further, ERI has strong bipartisan support, so it is unlikely that there will be an effort to eliminate or reduce it within the foreseeable future.”

Anticipating Russia’s reaction to the U.S. move to fortify NATO’s Eastern European flank amounts to anticipating Putin’s reaction. And reading the intentions of Putin, a former KGB agent, has been befuddling for America’s spies. His surprise announcement in March that Russia was pulling out of Syria, for instance, caught most of the Washington establishment off guard.

“How Putin is going to behave is presumably a mystery, and probably even a mystery to Putin,” said Gregory Treverton, chairman of the National Intelligence Council.

“I take him to be strategic and therefore risk adverse in some sense, but I do worry about the possibility of blundering across an Article 5 boundary by accident or miscalculation, and that would take us into a very different world,” Treverton said in March at CSIS. Article 5 is the section of the NATO charter stating that an attack on one member is an attack on all.

U.S. officials have to get a much better read on Putin if policy toward Russia is to improve, argues Fiona Hill, a senior fellow focused on Russia at the Brookings Institution.

“If the United States and its allies are not to be continually surprised, we will have to put more resources behind understanding what is happening inside Russia, as well as analyzing the complex of Russia’s interactions internationally,” Hill wrote in a recent essay.

Putin has been in power for nearly 17 years, whether as president or prime minister, and his imprint on Russian policy will likely stretch further into the future. The Russian political elite share Putin’s craving for Russia’s recognition as a power on the world stage, according to Hill.

“Any successor to Putin, no matter who this is, would be just as staunch a defender of what they see as Russian interests as Vladimir Putin is,” she told the House Armed Services Committee in February.

Russia’s intervention in Ukraine, and its provocations elsewhere, have put the spotlight on NATO’s efficacy as a security collective in the 21st century. Whether a second cold war or not, the standoff between Russia and the West is prompting serious questions about the future of the security bloc.

While the ERI is set to bolster U.S. ground forces and infrastructure in Europe to deter a possible Russian attack, future threats aren’t limited to traditional warfare. Stavridis, the former NATO commander, says the alliance should think more creatively about adapting to cyberspace, which is increasingly a warring domain. Russia’s 2008 invasion of Georgia was preceded by cyberattacks on Georgian government websites; hackers recently knocked out a swathe of the Ukrainian power grid.

NATO has updated its defense policy so that the Article 5 collective defense clause applies to cyberattacks. Regardless, Russia’s cyber capabilities are formidable and could be continually brought to bear on NATO countries.

“Most NATO leaders fail to understand the change in the technology of the threat,” he wrote. “The Russian military now has weapons of far greater range, precision and lethality than ever before.”

Ahead of a NATO summit in Warsaw this summer, however, members will have to wrestle with an age-old question that has dogged the security bloc since its inception: Is everyone pulling their weight? While Central and Eastern Europe nations have beefed up their defense budgets, other nations such as France and Britain are more focused on the threat of illegal migration and Islamic terrorism than Russian expansionism.

“Fair burden sharing between the United States and its European allies is a perennial challenge within NATO,” wrote CSIS’s Samp and Cancian. “To win commitments from the Europeans, the United States must make clear its expectation that allies be ready with some high-profile announcements of their own by the time of the Warsaw Summit in July.”