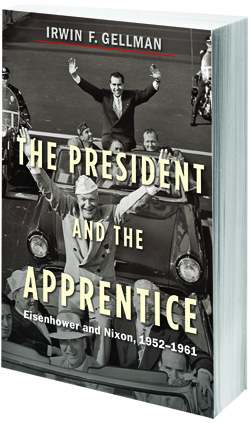 Irwin F. Gellman’s “The President and the Apprentice: Eisenhower and Nixon, 1952-1961” is an ambitious book. It seeks to underscore President Dwight D. Eisenhower’s reputation as a highly successful president; demonstrate that Eisenhower’s vice president, Richard Nixon, was an important member of the administration; describe Nixon’s many activities as vice president; and suggest these experiences, especially regarding foreign policy, honed skills that Nixon later used in his career.

Gellman clearly admires both Eisenhower and Nixon, but he is also a fair-minded scholar who is intent on examining the complex relationship between the two men and figuring out how the Eisenhower administration functioned.

Gellman was most recently a history professor at Chapman University in Orange County, Calif., and is now an independent scholar. He is the author of four books, including “The Contender: Richard Nixon: The Congress Years, 1946-1952.”

“The President and the Apprentice” directly challenges the notion that Nixon was a marginal figure in the Eisenhower administration and that Ike neither liked nor respected Nixon. “The reality is that the president and his apprentice respected and trusted each other. Nixon was deeply involved in far-reaching initiatives and emerged as one of the most important presidential advisers,” Gellman writes.

He begins the book by emphasizing that Eisenhower’s reputation as president has improved dramatically from the modest regard that journalists and historians had for him when he left office in January 1961. Eisenhower was initially dismissed as a lackluster and disengaged president who delegated most of the responsibilities of governing to his chief of staff, Sherman Adams, for domestic issues and his secretary of state, John Foster Dulles, on foreign policy. But Gellman observes that as the years have passed and more documents have become available, scholarly regard for Ike has grown. He is now usually regarded as a highly successful president who skillfully led the United States and the West during a dangerous period of the Cold War.

Most of “The President and the Apprentice” is devoted to telling the story of Nixon’s role in the Eisenhower administration. Gellman makes it clear that Eisenhower was the boss and Nixon was a diligent and talented assistant — the apprentice. “At first, they did not know each other’s strengths and weaknesses, but as Nixon became familiar with how Ike governed, he was better able to adapt the president’s ideas to practical proposals and make himself a trusted part of the administration,” he writes.

When their collaboration began in the presidential campaign of 1952, Ike was already a national icon, the former five-star general who defeated Adolf Hitler in World War II, and Nixon was a 39-year-old first-term senator from California.  This stature gap between the two did not narrow during the eight years of Eisenhower’s presidency.

“Eisenhower, the supreme commander of the Allied Expeditionary Force in World War II, the former chief of staff of the Army, the first supreme commander of the North Atlantic Treaty Organization, did not have partners,” Gellman writes. “He led a team of subordinates, who were expected to go where Ike sent them, be his eyes and ears, provide intelligent and informed advice, deliver his messages, execute his decisions, and occasionally become casualties. Whether the battlefield was military or political, Ike often had his soldiers take the heat instead of himself.”

Gellman argues that Ike was determined to keep Nixon involved in the administration’s initiatives and deliberations, in part because he saw how woefully unprepared Vice President Harry Truman was when he took over the presidency after President Franklin D. Roosevelt died. Nixon attended Ike’s weekly Cabinet, National Security Council and legislative meetings and chaired meetings in the president’s absence. Nixon served as a liaison with Congress, met with dozens of foreign leaders when they visited Washington, traveled extensively as an envoy for the president and was the administration’s top spokesman during political campaigns. Gellman says that Nixon collaborated with Ike and Dulles on foreign policy, tried to rein in controversial Republican Sen. Joseph McCarthy and worked on important issues such as civil rights.

“Ike grew to have great confidence in his vice president and had Nixon express opinions during crucial meetings and summarize those of others. Nixon depended on the president to provide these opportunities, and he put forward his best effort to become a versatile utility player on Ike’s team. More than anyone else in the administration, he understood the president’s intentions on many different fronts and became an articulate spokesman for his policies. Because of Nixon’s desire to advance the president’s initiatives and because Eisenhower recognized his vice president’s talents, Nixon gradually assumed a more diverse set of duties than anyone else in the administration,” Gellman writes

Gellman believes that Nixon’s reputation as a beleaguered vice president began during the 1952 presidential campaign with the controversy over Nixon’s campaign funds, culminating in his so-called “Checkers” speech in which Nixon delivered a television address defending himself against allegations of fiscal impropriety. Gellman suggests that Eisenhower was impressed by Nixon’s response to the controversy, but Ike did not immediately come to Nixon’s defense or reaffirm his place on the Republican ticket after this dramatic speech on national television. Nixon resented Eisenhower’s reluctance to immediately retain him and this episode got the Eisenhower-Nixon relationship off to a shaky start.

Four years later, as Eisenhower geared up to run for re-election in 1956, he suggested to Nixon that rather than remain as vice president, he take a senior job in the Cabinet such as secretary of defense. Ike said this would bolster Nixon’s administrative and management skills. Gellman believes Ike proposed this move as part of a job rotation practice that is common in the military, not as a career-shattering demotion of Nixon. Not surprisingly, Nixon saw the suggestion as a put-down and made it clear he had no interest in leaving the vice presidency. Ike ultimately asked Nixon to run on the ticket with him again in 1956 and they won handily. But Nixon’s political reputation was damaged by Eisenhower’s apparent willingness to reassign him.

Eisenhower, probably inadvertently, badly damaged Nixon’s 1960 presidential campaign. Ike was asked by a reporter in the summer of 1960 to describe a key decision that Nixon participated in as vice president and the president quipped, “If you give me a week, I might think of one.” Eisenhower was apparently exasperated by repeated press questions on the topic, but his biting comment undercut Nixon’s claim that he was an important member of the administration. The Kennedy campaign used Eisenhower’s sound bite in highly effective TV ads against Nixon.

Gellman believes Nixon was an important part of the Eisenhower team and argues that the president gave him critical duties, including extensive diplomatic missions to Africa, Asia and Latin America. “Eisenhower led the Republican national ticket twice, and he governed from the top. Although he listened intently to political advice, he never had political partners. He ran his team and made the vice president his major utility player. When the president needed someone to take on a difficult assignment, Nixon was often selected. The two men never shared equal billing and were never buddies. Ike was old enough to be Nixon’s father. Despite their age difference, however, they developed a close and cordial relationship and worked well together throughout Ike’s tenure in office,” Gellman writes.

“The President and the Apprentice” is an essential resource for scholars of Eisenhower and Nixon; the book is a marvel of deep research and exhaustive study. Gellman has devoted several decades to tracking down documents related to this period and these men. He provides an exhaustive account of Nixon’s meetings, trips and projects as vice president and shows that Nixon made substantive contributions to the administration. These eight years were a critical time in Nixon’s political development and this book provides both a broad perspective and granular detail about Nixon’s tutelage under Ike. For those interested in these two political figures, Gellman’s bibliography and footnotes are both a treasure trove and a road map for further study.

This book may be challenging for the general reader, given its extensive detail and methodical presentation of evidence. Additionally, Gellman frequently challenges other scholars on matters of both fact and interpretation regarding Nixon and Eisenhower. These passages are more interesting for scholars than the typical reader of non-fiction.

Gellman makes a valiant effort to capture the complexity of the Eisenhower-Nixon relationship. Clearly, Ike had deeply ambivalent feelings about Nixon. Throughout his presidency, he made dozens of comments about Nixon that offered tepid praise. Ike frequently compiled lists of worthy Republican successors and Nixon was not always on these lists or when he was, he was almost never at the top of the list. Even during the early months of 1960 when Nixon was the unchallenged leader for the Republican presidential nomination, Ike was reluctant to endorse him and offered the most restrained praise of him.

He did ultimately endorse Nixon for president both in 1960 and 1968. It’s unfair to fault Gellman for failing to fully explain a relationship that may have even puzzled Eisenhower and Nixon.