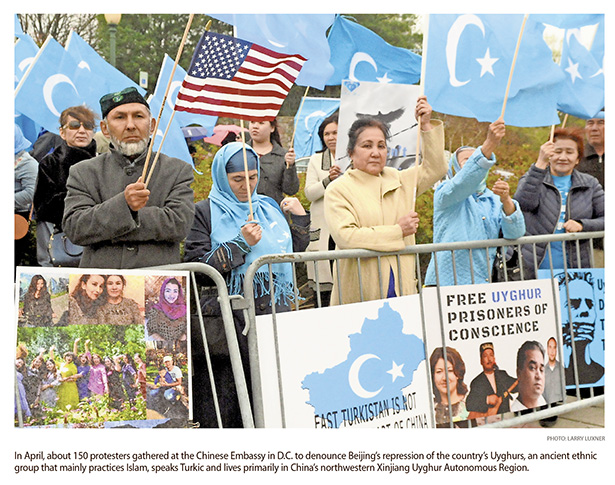 On a rainy April morning in Washington, about 150 protestors gathered in front of the Chinese Embassy, waving light-blue flags and shouting slogans on behalf of an ethnic group few Americans have ever heard of.

“Between 800,000 and 1 million Uyghurs are incarcerated in China right now. This is human rights abuse on a massive scale,” said Katrina Swett Lantos, president of the Lantos Foundation for Human Rights and Justice. “It is particularly insidious because they are going out of their way to target Uyghurs who have relatives in the United States.”

The activist, who is the daughter of Holocaust survivor and lawmaker Tom Lantos — a California Democrat who chaired the House Foreign Affairs Committee until his death in 2008 — helped organize the impromptu April 19 demonstration at the Chinese Embassy on International Drive.

The group also attempted to deliver a box full of protest letters to China’s ambassador, but embassy guards refused to accept the package — and D.C. police eventually asked the group to leave the premises.

“Our job is to shine the spotlight and energize Congress,” she told The Washington Diplomat as protesters gathered across the entrance to the embassy, waving hand-painted signs all around her. “China is a dangerous goliath aiming to intimidate all of Asia. We cannot give it a free pass just because it’s an economic power.”

The issue may be gaining some traction. A day before the D.C. protest, Acting Deputy Assistant Secretary of State Laura Stone said the U.S. could sanction Chinese officials and other human rights offenders for the detention of at least “tens of thousands” of ethnic Uyghurs, according to the AP’s Gerry Shih.

Shih noted that Sen. Marco Rubio and Rep. Chris Smith, Republican co-chairs of the Congressional-Executive Commission on China, asked the U.S. ambassador to China to visit and report on conditions in the region, calling the camp network in Xinjiang “the largest mass incarceration of a minority population in the world today.” 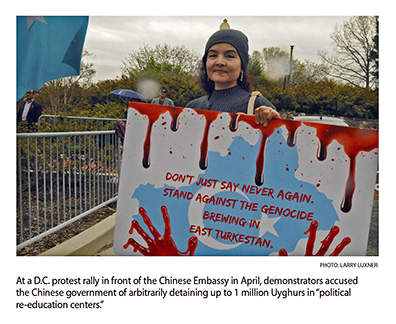 China’s economic heft and closed-off communist system have allowed it to shield the region from outside scrutiny. But for years, tensions have flared between the Uyghurs and China’s predominantly ethnic Hans, whose mass migration to Xinjiang in recent decades turned the Uyghurs into a minority. The Uyghurs briefly attained independence in the early 20th century, but the region fell to communist Chinese rule in 1949.

Since then, Beijing has capitalized on a spate of violent attacks to launch a sweeping crackdown on the region in the name of preventing religious extremism and separatism while promoting ethnic unity. Hundreds of thousands of Uyghurs have been arbitrarily detained or forced to undergo “political re-education,” including “home stays” with over 1 million Chinese officials who learn about the Uyghurs’ personal lives and subject them to political indoctrination.

“Muslim families across Xinjiang are now literally eating and sleeping under the watchful eye of the state in their own homes,” said Maya Wang, senior China researcher at Human Rights Watch, in a May 13 report. “The latest drive adds to a whole host of pervasive — and perverse — controls on everyday life in Xinjiang.”

Beijing has also sought to repress the Uyghurs’ religious and cultural freedoms, shutting down mosques, banning long beards and curbing the use of the Uyghur language in schools. Uyghurs also complain of persistent discrimination at the hands of the Han majority in education, housing and jobs.

At the D.C. protest, Salih Hudayar, wearing a traditional four-pointed Uyghur cap known as a “doppa,” was one of the young demonstrators chanting anti-China slogans.

“China occupied East Turkestan in September 1949 and officially abolished our state on Dec. 20, 1949, when we officially lost our independence,” said Hudayar, a 24-year-old consultant who recently moved to the D.C. area from Oklahoma. “Since then, we have never stopped our protest.”

The Xinjiang Uyghur Autonomous Region, which the Uyghur people themselves refer to as “East Turkestan,” is a vast, resource-rich area of western China covering nearly 643,000 square miles — nearly four times the size of California.

In an open letter to the Chinese Embassy, Rebiya Kadeer — the self-described “spiritual mother of the Uyghur Nation” and the exiled leader of the World Uyghur Congress — called on Beijing to essentially let her people go.

“Since Chen Quanguo, the former secretary of Tibet, took office as party secretary of the Uyghur Autonomous Region in August 2016, he has been imposing unprecedented ferocious and inhumane policies in the region,” wrote Kadeer, claiming that hundreds of thousands of Uyghurs have been arrested simply because of their ethnic identity, or for having traveled overseas or having relatives living abroad. 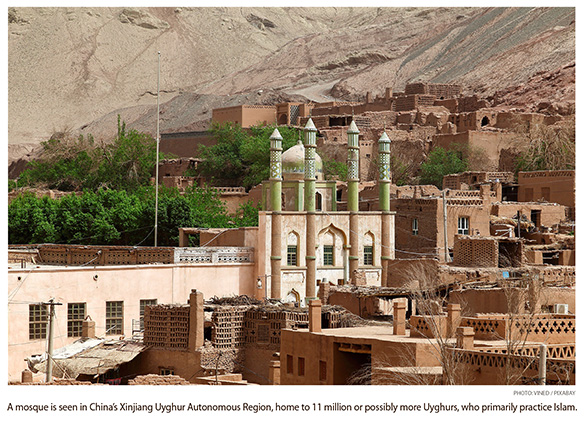 She said China has sent at least 1.5 million Uyghurs to so-called “political re-education centers” to become indoctrinated with Chinese nationalist and communist ideology, forcing them to recite anthems, slogans and other diktats if they want to eat or sleep.

“Cities and towns across the Uyghur homeland have become deserted and almost all rural areas have been isolated from neighboring regions and blocked from visitors,” Kadeer said.

Among her demands to the Chinese government:

Tayir Imim, 37, said the protest had been organized with only three days’ notice.

“If we had informed the people a week earlier, maybe there would have been more than 1,000 people here,” he said.

Imim, who studied at Israel’s University of Haifa for five months last year, volunteers for the Uyghur human rights movement. We asked him why the Chinese government is doing this.

“Because China wants to wipe us out, so there won’t be any nation that claims ownership of the land,” he responded. “The Uyghur people claim ownership of the region. They want to assimilate our people into the Han Chinese majority by forcing us to abandon our national culture and identity. Their ultimate goal is to assimilate us and wipe out an entire nation, so there will be nobody any more who can claim ownership.”

He added: “Maybe it won’t make a big difference or have a big impact on Chinese policy, but we just began our movement. The U.S. government says the world is aware of what the Chinese government is doing against a peace-loving, civilized people — and the world will not be silent on the issue forever.”