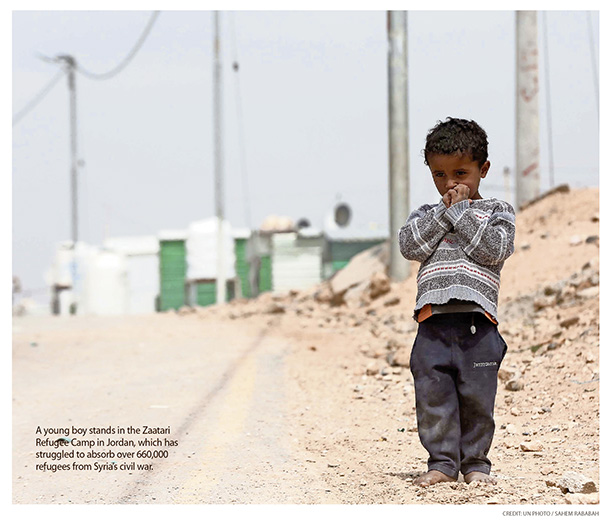 According to the United Nations, there has never been a greater need for humanitarian assistance in the world than there is today. More than 136 million people from 26 different countries are in need of protection and humanitarian assistance. A record-high 65 million people worldwide have been forcibly displaced from their homes because of persecution, conflict, violence or human rights violations.

I am proud to see that my own country is stepping up to the plate and responding to these growing needs.

Since 2013, the share of humanitarian assistance in Norway’s overall aid budget has increased by more than 50 percent. Norway is among the world leaders in humanitarian spending per capita.

In recent years, Norway’s humanitarian role has been particularly visible in Syria and Iraq. Since 2014, Norway has contributed around $1.25 billion to Syria and neighboring countries, making Norway the fifth-largest donor country to the Syria crisis. Of this assistance, almost 90 percent is humanitarian, with priorities including education, health care, nutrition, emergency support, water, sanitation and health, and protection.

And Norway has taken particular responsibility in Iraq. The brutal rise of the Islamic State and the ensuing conflict have caused millions of Iraqis to flee their homes. The Islamic State’s deliberate strategy of leaving behind mines and explosives to target the local population has led to a despairingly high number of civilian victims. For lives and limbs to be saved, for stabilization and for normal life to return, it is imperative that these areas be cleared. That’s why Norway’s top priority in Iraq is mine clearance.

Activities supported by Norway include identifying hazardous areas, training the local population in risk management, and clearing mines and explosive remnants of war to make it possible for internally displaced people to return.

Mine clearance in Syria and Iraq is extremely challenging and entails many risks, not least due to the highly complex and sensitive natures of the Syrian and Iraqi conflicts. Humanitarian demining partners are therefore dependent on a long-term commitment on the part of their donors and close coordination of international efforts.

I am particularly proud of how the United States and Norway are joining forces in the Middle East and elsewhere on these issues. Both countries are among the world’s five largest contributors to mine clearance efforts worldwide. One example of our close cooperation is the U.S.-Norwegian Demining Initiative, which was launched in 2016 with the aim of making Colombia mine-free by 2021.

It entails great responsibility to be a humanitarian donor. A key requirement for all humanitarian efforts supported by Norway is that they should be based on the humanitarian principles of humanity, neutrality, impartiality and independence.

This means that humanitarian organizations supported by Norway must not take sides in hostilities. Aid must be carried out on the basis of need alone and independent of surrounding political, economic, military or other conditions.

There are many examples of the damage that can occur when aid that claims to be humanitarian deviates from these core principles. It can endanger access by humanitarian groups to populations in need, and it can put the humanitarians themselves at risk. Afghanistan, where I served as ambassador, is one of the most dangerous places for aid workers worldwide. I can hardly imagine anything more appalling than targeted attacks on humanitarian convoys and workers.

Another important rule of thumb for Norway is that humanitarian interventions should contribute to sustainable development in the long term. For instance, Norway has a strong focus on the education of children in conflict situations and helped initiate the Education Cannot Wait Fund. Education is a life-saving intervention during a crisis that also contributes to long-term development after the crisis is over.

As pointed out by Norwegian Prime Minister Erna Solberg, “It is difficult to think of any other circumstances where education is more important than in creating the basis for conflict resolution, reconciliation and rebuilding of societies.”

This August, Norway’s foreign minister and development minister will present a new humanitarian strategy for our country that takes into consideration the changing global landscape.

While Norway’s goal is to be a principled and smart humanitarian donor, our overarching aim must always be to make humanitarian assistance unnecessary. That’s why Norway will also continue to support crisis prevention and conflict resolution efforts.

Norwegian Foreign Minister Ine Eriksen Søreide gave a crystal-clear message to the U.N. General Assembly last month: “We must shift away from today’s focus on managing and responding to crisis, and instead move toward preventing conflicts from breaking out in the first place.”

The 65 million people who have been displaced must surely agree.