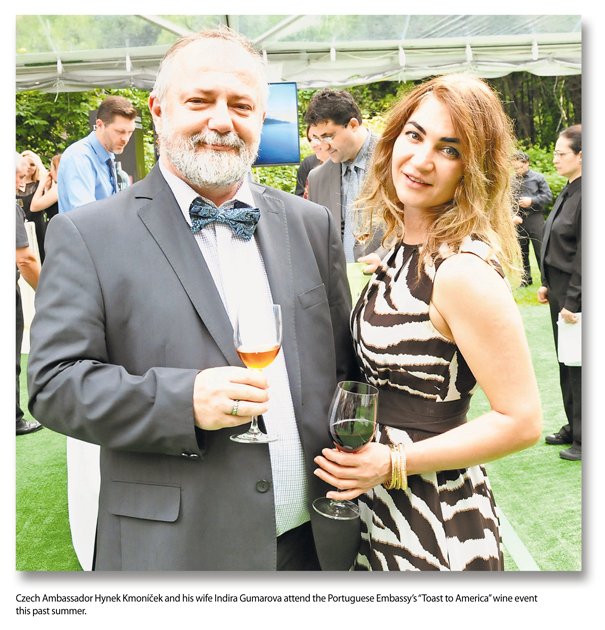 Indira Gumarova’s business card reads “wife of the Ambassador and more.” It’s a unique description of a singular woman who is indeed more than the wife of an ambassador.

Gumarova, the 42-year-old wife of Czech Ambassador Hynek Kmoníček, is a native Tatar who was born in Uzbekistan, worked as a public relations professional in New York City for 15 years and runs a blog on food, fashion and folklore.

“I just returned from Prague where I was part of the team to launch a major retrospective exhibition of Manolo Blahnik, whose father was Czech,” Gumarova told us. Blahnik’s unveiling party was for a single pair of handmade, Bohemian-inspired, stiletto boots to celebrate his forthcoming Prague exhibition titled “The Art of Shoes.”

Working in PR in New York City is how Gumarova met her husband, a career diplomat who most recently served as foreign policy advisor to Czech President Milos Zeman. “I invited 150 ambassadors from the U.N. to an event but he was the only one who came. And he stayed. I thought he was so charismatic,” Gumarova recalled. “He was funny. He has a big sense of humor.” After a whirlwind romance, they were married by the mayor of Prague.

Kmoníček had been married before and has four children. Gumarova almost entered into an arranged marriage when she was younger but decided against it. “I ran away. I didn’t like the idea that someone would tell you, ‘This is your husband,’ and that was it,” she said, although she added that for some the arrangement works. “My sister is in an arranged marriage and she is still very happy.”

Gumarova, who speaks English, Russian and conversational Czech, is Muslim while her husband is Jewish. She traces her origins to the Tatars in Asia and Europe, a Turkic-speaking people who once controlled vast territory as semi-nomadic empires and were allied with Genghis Khan but today live in Russia and other parts of the world.

“It is a strange feeling to belong to the small nation, Tatar, which started as a Mongolian tribe and later became the Turkic-speaking people on the Asian steppes,” Gumarova said.

“As a child, I was not interested in my genealogy. But the older I am, the more I can see that ethnicity has an effect on me,” she explained. “For example, I always liked curved walls, not square rooms, and relatively empty rooms with colorful walls. That is the concept of a yurt, the round tent my ancestors inhabited for thousands of years. From childhood, it came naturally to me and only later did I find the connection to my Tatar origin.

“Because of my multicultural background, I like to call myself a culture translator … bridging culture to culture,” she added. “I am involved with several public campaigns and media projects focused on immigration issues and the integration of minorities.”

From minorities to Minolos, Gumarova’s tastes are as eclectic as her husband’s. Before joining the Czech Foreign Service, Kmoníček studied English and Arabic language at Charles University in Prague, as well as the modern history of the Middle East at Hebrew University in Jerusalem. He has served as ambassador to Australia, India and the United Nations in New York and held various postings in the Asia, Africa, America and Middle East divisions of the Ministry of Foreign Affairs. A former professional musician who plays classical guitar and lute, he also enjoys cooking ethnic crossover cuisine and collecting the hottest sauces on the planet. 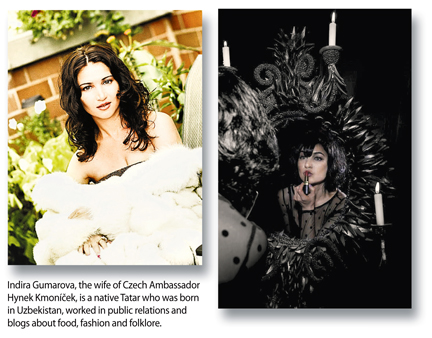 “He collects hot sauce and has 400 different bottles, all open, from all over the world,” Gumarova said.

Before coming to Washington, D.C., earlier this year, Gumarova and her husband lived in the iconic Prague Castle complex, home to the Czech president’s residence and a tourist hotspot in the capital.

“Prague Castle is the largest ancient castle in the world,” she proudly said, noting that it attracts over 1.8 million visitors annually.

The castle, which overlooks the picturesque medieval city, is home to various museums and was the seat of power for Bohemian kings, Holy Roman emperors and previous presidents of Czechoslovakia.

“Prague Castle is one of the most popular tourist sites in the world,” said Gumarova. “Living in the Prague Castle means living in the neighborhood, not the building itself. This is the oldest part of Prague, which is so alive with people during the day but almost empty after 6 p.m. — no people, no shops, closed museums.”

“Around only 60 people inhibit this area,” she explained. “There are three types: older original inhabitants who moved here during communist times when it was an unfavorable part of town, without modern amenities; members of the families whose names are part of Czech history with palaces, streets and airports named after their families; and people who were brought in because of their work…. That is how my husband and I started living in the ‘hood.’

“We rented our house from the Prague Castle in the part that is closed to the public. Since the building belongs to the castle, the president has veto power over whom he wants to have as an immediate neighbor,” she said.

“The house cannot be bought. Also, to rent it, you must have a proper security clearance. The rent is not cheap — it is the highest rent in all of the Czech Republic. Therefore, it limits the number of people eligible to rent the place due to a rare combination of having the security clearance, financial resources and the presidential approval,” she explained.

“As for furniture, we were able to have our own pieces together with others we located in Prague Castle’s storage…. The chairs we found in storage we later discovered through the archives that they were made for the last coronation of the Czech King Ferdinand V in 1836. Naturally, none of these objects can be bought. They stay property of the castle once you leave.”

While Gumarova misses living like royalty, she said she has relished her time in America, although she admits that she prefers New York to Washington, D.C. “I love New York because it is so full of life, like a melting pot.”

Although they enjoy going out in D.C., “we don’t go out to eat unless the restaurant’s food is better than my husband’s ethnic cooking. He is a great cook and cooks for us every night. I don’t cook at all,” said this blogger, who reviews restaurants and other people’s cooking.

As if on cue, the ambassador appeared, having just walked up the hill from the big, boxy Czech Embassy on Spring of Freedom Street to the handsome, graceful stone residence hidden in the woods.

“Cooking is relaxation for me,” he told us. “I even cook in my sleep. And when I can’t sleep, I get up in the middle of the night and cook.”

His wife jumped in to note that her husband has written for the Czech version of Appetite Magazine.

Besides writing, another pastime they share is music. She plays the piano and he the classical guitar. “I play for myself,” she said. “The piano is my first love. It brings me peace.”

“If we aren’t traveling and we have two weeks at home, I start moving furniture. He puts it back at night and I move it again the next morning,” she laughed. “We don’t fight about where to move the furniture. We just do it.”